The major marketing effort behind the Pope's first tweet

An insight into the ceaseless efforts made by Twitter to encourage the Pope and other world figures to become users. 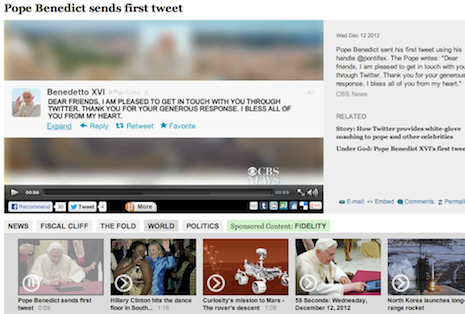 It may look as if Pope Benedict XVI’s first tweet on the auspicious date of 12/12/12 will be a divine act. But orchestrating the pontiff’s debut on Twitter has been a far more earthbound effort, involving an elaborate behind-the-scenes production.

In Vatican City, a Twitter employee will be by the pope’s side as he taps the screen to send pre-drafted messages in eight languages from his iPad. His first tweet will be his own words, the Vatican said, but someone else may actually type it for him. He will take at least three questions from his Twitter followers, but church officials from a group called the “Pontifical Council for Social Communications” will be overseeing the interaction.

Providing the white-glove coaching to top Catholic leaders is Claire Diaz-Ortiz, Twitter’s pontiff recruitment chief, who has been in Rome for the past week to make sure the holiest of new members, @pontifex, becomes a social-media success.

The effort is part of Twitter’s powerful — not to mention low-cost — strategy to expand its influence and rack up more users by getting the world’s biggest names in sports, Hollywood, government and religion onto the Internet’s leading megaphone for self-promotion.

In the six years since its launch, Twitter has amassed a voluntary corps of famed faces that includes Microsoft co-founder Bill Gates, President Obama, the Dalai Lama, Neil Young and Snooki of “Jersey Shore” reality television fame. These ambassadors create a butterfly effect of interest that has fueled the San Francisco company’s explosive growth to 140 million active users.

“We’ve always talked about Twitter as a place to get closer to your interests,” said Adam Sharp, a spokesman in charge of the site’s promotion of government and religious content. “With the pope and other faith-based efforts, we’ve found strong engagement from followers who retweet, favorite and reply to influential users.”

They are, in Twitter corporate-speak, “high-touch” clients, the focus of about 20 employees who circle the globe in hopes of getting new and powerful recruits. They approach the world’s most influential people with promises of free marketing, extra security against impostors and training to avoid the gaffes that have embarrassed some business executives and members of Congress.

Over the past two years, Sharp has pounded the halls of Capitol Hill, pitching the service to lawmakers. About one-third of them were on the site when he started. Today, he noted, nearly all members, “except for those who are retiring or probably about to retire,” are tweeting prolifically.

The pope’s debut has been an extended marketing event, with the announcement days ago of his own Twitter handle and plans for his first 140-character missive.

The Catholic Church said Bene­dict’s Twitter event Wednesday in the Paul VI Audience Hall will help it recruit young members. The Vatican has worked for months with Twitter staffers to promote itself through various accounts. And it said it is only natural for the pope to speak directly to the masses.