The long wait is over for Sri Lankan Catholics

After the green light for places of worship to reopen, the faithful can attend Masses again Sumeda Almeida used to attend Mass at St. Mary's Church in Negombo at 6am, but the church gate was closed when coronavirus restrictions were imposed in March.

Despite her sadness, she continued to rise early and pray in her living room every day.

Her church held three Sunday Masses before the pandemic struck. After the morning Masses were over, some parents would pray until their children’s Sunday school was finished. Every Sunday evening, she and other women would sweep the church.

Now, after nearly three months without Masses and other services, Almeida is celebrating the news that Sri Lanka can reopen its places of worship.

"Children can resume Bible studies and the faithful can attend regular Masses every day. Their children can attend Sunday school," said the mother of three.

Anil Jasinghe, director general of health services, announced this week that places of worship could reopen from June 12 subject to social distancing rules.

Permission has been granted for religious gatherings with a maximum of 50 attendees. In places where there is no room for 50 people to attend or maintain social distancing, only half of the maximum number of people who normally attend will be allowed.

The Catholic Church in Sri Lanka canceled Masses and other services from March 15 because of the rapid rise of Covid-19 cases in the country. The decision came in the middle of the Lenten season that features common gatherings such as the Way of the Cross, Lenten pilgrimages, group prayer services, Holy Hour and passion plays.

The Catholic Bishops' Conference of Sri Lanka called on all Catholics to observe a day of fasting and prayer on March 22 to protect and heal all concerned in the country.

Like Almeida, Jacintha Sithumi, 48, was a regular churchgoer until the coronavirus restrictions were imposed. 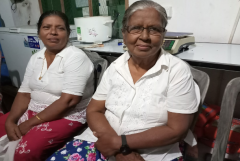 She cannot remember a period when Catholic churches have been closed for so long. Last year churches were closed for some time after the Easter bomb attacks when nine suicide bombers affiliated to local Islamist extremist group National Thowheed Jamath targeted three Christian churches and three luxury hotels, killing at least 279 people, including 37 foreign nationals, and injuring at least 500.

From the day that Cardinal Malcolm Ranjith made a vow to Mother Mary on April 3 to save Sri Lanka from Covid-19, Sithumi and her family have recited the rosary at 7pm each day.

"Now, I have to wash them and get ready to attend Sunday Mass. I am very happy to do that and the whole village can meet again," said Sithumi, a member of the Legion of Mary in Negombo.

Almeida said many people used to meet after Mass on Sundays. That's where they got to know about the sick people in the village and could help them during the week.

For about 80 days, there was no contact between villagers. They had to live in isolation.

"The loss was immense, and we as human beings were alienated from each other. Covid-19 made us feel like we couldn't live alone. We have learned many lessons during the pandemic," Almeida said.