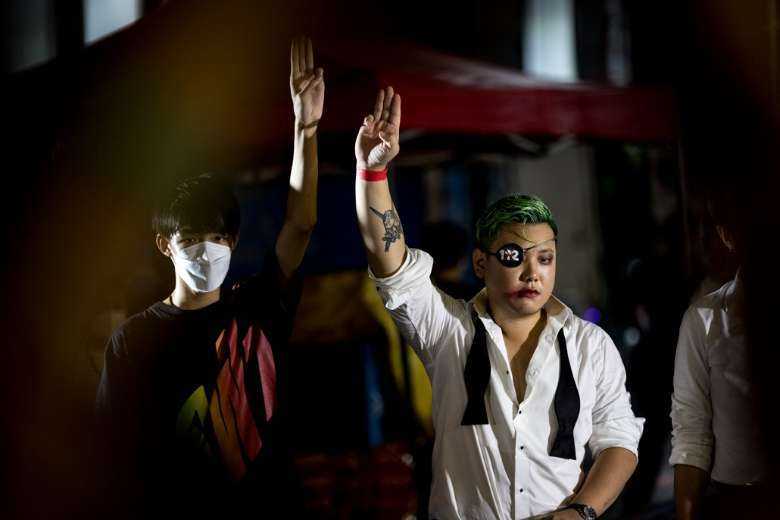 Activist Thanat Thanakitamnuay flashes a three-finger salute during a protest against Article 112, Thailand's royal defamation law, in Bangkok on Oct. 31. Over the past year more than 160 Thais, including numerous students, have been charged with royal defamation. (Photo: AFP)

Ask Thai academics if they have freedom to do research unfettered by their superiors, and if they are honest they’ll tell you the truth: “That depends.” It depends on the topic, that is.

Academic freedom in Thailand remains severely limited and lecturers and students alike would be at risk of being penalized and even imprisoned if they were to offer up certain views, especially ones that could be deemed critical of the country’s monarchy.

Although the monarchy has held a central role in the country’s life for centuries, honest discussions of the institution and its role in modern Thailand are off-limits. In the predominantly Buddhist nation where the monarchy is officially held up as an exemplar of unrivaled virtue, any criticism of the institution, however mild or factually accurate, can incur a lese majeste (royal defamation) charge, which prescribes up to 15 years in prison per offense according to the Criminal Code.

“The truth is no defense in such cases,” a progressive Thai historian who works at a prominent university in Bangkok told UCA News on condition of anonymity. “Even if you simply state a [verifiable] fact, you can still be charged and convicted.”

Scores of Thais have learned that at their own cost.

Over the past year more than 160 predominantly young Thais, including several high school students and numerous university students, have been charged by local authorities with royal defamation and other crimes for their views expressed peacefully during pro-democracy rallies or online.

Authorities have shrugged off calls by prominent international rights bodies, including the United Nations Human Rights Council, to desist from such prosecutions and carried on with further charges.

In a highly controversial decision, meanwhile, the Constitutional Court recently ruled that calls for a democratic reform of the monarchy were tantamount to acts of sedition as they posed a national security threat. The decision has sent a clear message to all Thais that even a discussion of the topic was a crime. Observers say the decision has served to further curtail the already limited scope of basic freedoms, including free speech and academic freedom, in Thailand.

Not surprisingly, in a new report on the state of academic freedom worldwide by Scholars at Risk, a US-based network of academic institutions, Thailand has been highlighted as a problematic case.

In the report, titled “Free to Think 2021” and published this month, the non-profit group highlights a series of punitive actions that have been launched by the authorities against student activists who have voiced critical views of the country’s monarchy. These have included arrests, numerous criminal charges and the denial of bail to detained activists.

“Scholars and intellectuals also experienced legal pressure for their academic work about the monarchy. Thailand’s lese majeste law remains a serious threat to academic freedom and other rights of the higher education community,” Scholars at Risk writes.

“Arrests and prosecutions intended to restrict and punish peaceful student expression undermine academic freedom and the role universities play in functioning democracies. They chill academic inquiry and expression, depriving society of the benefits of higher education and research.”

Academic research at Thai institutions has long been timid when it comes to topics such as the monarchy with academics routinely self-censoring or choosing to ignore certain topics entirely, observers have said. Some outspoken academics who refused to follow the official line have fled into exile abroad so as to avoid being imprisoned on charges of royal defamation and other crimes.

One of these scholars is Pavin Chachavalpongpun, 50, who has been a prominent critic of the Thai monarchy. Pavin sought and received asylum in Japan where he is currently a professor at Kyoto University. The scholar fled Thailand in 2014 when an arrest warrant was issued for him shortly after a military coup that year spearheaded by the country’s then army chief and current prime minister, Prayut Chan-o-cha.

“The monarchy is revered. You have to love it unconditionally,” noted Pavin, who runs Royalist Marketplace, a Facebook forum for a free exchange of ideas on Thai democratic aspirations.

In July 2019, Pavin said he had been targeted by an agent of Thai authorities who attacked him at his home in Japan and sprayed him with a chemical substance that burned his skin.

“The attacker clearly wanted to intimidate [me],” Pavin said. “The doctor said the chemical was not deadly but said that the burning sensation will stay for quite some time.”

Thai authorities continue to punish and apply pressure on scholars, students and other members of the higher education community

Meanwhile, back in Thailand, researchers whose views have offended royalist sensibilities have faced disciplinary action by their institutions and even lawsuits. Earlier this year a lawsuit was filed against a historian, Nattapol Chaiching, over the contents of two books based on his PhD thesis about Thai politics during the Cold War in which he allegedly depicted a prince in a less than flattering light.

Lawsuits were also filed against Nattapol’s publisher, Same Sky Books, and the imprint’s editor-in-chief as well as his PhD thesis supervisor and others.

The plaintiff, a granddaughter of Prince Rangsit Prayurasakdi who is suing for 50 million baht (US$1.7 million) in compensation, argued that a mistaken assertion in Nattapol’s PhD thesis defamed Prince Rangsit, who once served as regent and died in 1951.

“The mistake — noting that Prince Rangsit interfered in the government by attending a cabinet meeting while serving as Regent — was first investigated by Chulalongkorn University officials in 2018. CU officials found that the mistake was not intentional but nevertheless froze public access to Nattapol’s thesis,” Scholars at Risk explains.

Since the military coup in 2014, academic freedom, never particularly robust, has diminished significantly in Thailand. Yet even as such freedoms have been rolled back by Prayut’s government, student activists have become more and more vocal in their criticisms of the palace and the military.

As matters stand, however, the student-led democracy movement appears to be fighting a losing battle with the full force of the regime arrayed against activists.

Meanwhile, academic freedom remains on the ropes, according to Scholars at Risk.

“Thai authorities continue to punish and apply pressure on scholars, students and other members of the higher education community. Such attacks and pressures have frequently stemmed from expression and inquiry considered to be critical of the monarchy and, more recently, student-led protests demanding democratic freedoms,” the group notes in its latest report.

“For Thai higher education and society generally to flourish, students and academics must have the freedom to peacefully voice dissent, ask questions and conduct academic research without fear of coercive legal action.”