The impending apocalypse in Asia 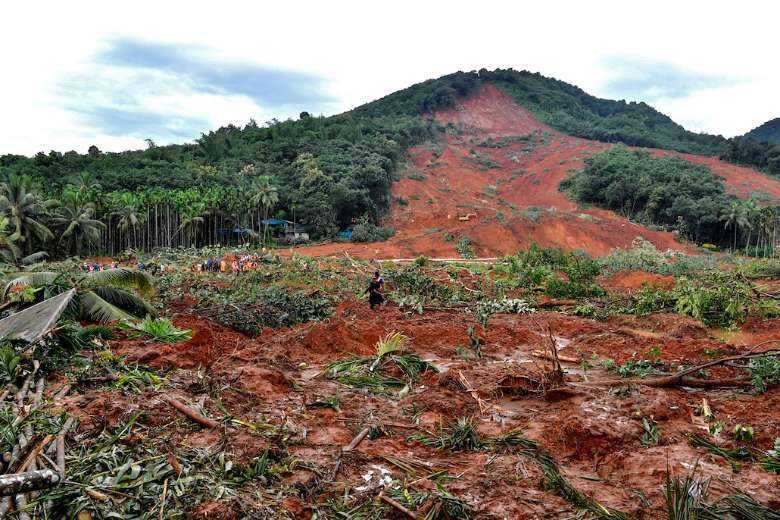 In this handout photo taken and released by the All India Congress Committee (AICC) Communication Department on August 11, 2019, shows the landslide site at Kavalappara-Bhoothanam, in Malappuram district of India's Kerala state. A UN report says the world will witness more than 10 natural disasters a week by 2030 and Asia will be the worst-hit region. (Photo:AFP/AICC Communication Department)

Are the Asian Church and governments on the most populous continent prepared to face natural disasters that will become the order of the day by 2030?

According to the Global Assessment Report 2022 (GAR2022) published by the UN Office for Disaster Risk Reduction, the world will witness around 560 natural disasters a year, or 10.7 a week, by 2030 and Asia will be the worst-hit region.

The UN report was released on March 26 ahead of the meeting of the Global Platform for Disaster Risk Reduction from May 23-28 in Bali, Indonesia. The report stated that nearly 500 medium to large-scale natural disasters have taken place every year over the past 20 years.

Though the increasing scale and frequency of natural disasters have made it clear that a risk management system needs to be put in place, the Asian Church and governments are currently bereft of funding and incentives for risk reduction.

Droughts are set to increase and the number of extreme temperature events per year will almost triple from 2001 to 2030. These disasters will have a cascading effect on biodiversity, environmental sustainability and social systems, which will manifest in the form of social evils like violence against women and homicides.

The frequent disasters are set to add to the poverty burden of Asia and Africa as an additional 37.6 million people are expected to be living in conditions of extreme poverty by 2030, noted GAR2022.

Governments need to include the financial, development, insurance and risk management sectors to reduce the impact of this self-destruction, the UN report observed

The poor are going to be the worst hit because of their high dependency on outdoor work and natural capital, both of which are highly vulnerable to climate change and global warming.

Governments need to include the financial, development, insurance and risk management sectors to reduce the impact of this self-destruction, the UN report observed.

Neither the Asian Church nor governments on the continent possess a comprehensive risk management mechanism to curb the impact of the systemic risk, which cannot be eliminated entirely but can be reduced and addressed effectively.

GAR2022 points out that systemic risk occurs in today’s globalized world mainly due to increased human mobility and rapid urbanization.

Unfortunately, most Asian nations with high disaster risks are also those with the highest proportion of people living below the poverty line. These include the Philippines, Bangladesh, Myanmar, India, Indonesia, Pakistan and Vietnam.

Asia will face these disasters at a time when average annual greenhouse gas emissions are reaching the highest level in human history.

In its report "Climate Change 2022," the Intergovernmental Panel on Climate Change expressed skepticism about limiting global warming to 1.5 degrees Celsius.

A study by the International Federation of the Red Cross and Red Crescent Societies estimated that in 2021 alone more than 57 million people in Asia were hit by climate-related disasters.

Even though developed nations promised to fund the green initiatives of developing nations at the UN COP26 climate conference in Scotland last year, the money is still largely on paper while there is less time to address climate change.  Global priorities are not aligned to tackling this greatest risk.

Asian superpowers China and India, which pledged to phase out fossil-based energy at the Scottish summit, are sulking as the world is too busy with the Ukraine crisis. In fact, China and India show more eagerness to buy as much Russian energy as possible as part of their energy security agenda.

It is going to be too bad for Asia as the region will be hit by the double whammy of natural disasters and high emission rates at the same time.

Given the fatal impact of these disasters on the most vulnerable, it is predicted that the world will see social and economic gains, particularly in developing countries, going to waste, leaving the poorest in the lurch as they will have to pay the highest cost.

Climate change and disaster impacts are set to uproot 216 million people by 2050 and push 132 million into absolute poverty by 2030. Because of this, Asia is set to lose an average of 1.6 percent of its GDP to disasters each year, while Africa will lose an average of 0.6 percent. In the case of developed nations, the loss is pegged at less than 0.3 percent.

According to GAR2022, governments and policymakers underestimate the threat and piece together laws that exacerbate existing vulnerabilities.

“The world needs to do more to incorporate disaster risk in how we live, build and invest, which is setting humanity on a spiral of self-destruction,” said UN deputy secretary-general Amina Mohammed while presenting GAR2022 at the UN headquarters in New York.

The Asian Church can take a leaf out of Laudato Si' and spearhead a risk management system to address the impending apocalypse in Asia. Though these impending natural disasters are largely of our own making, it is within our power to avert them.