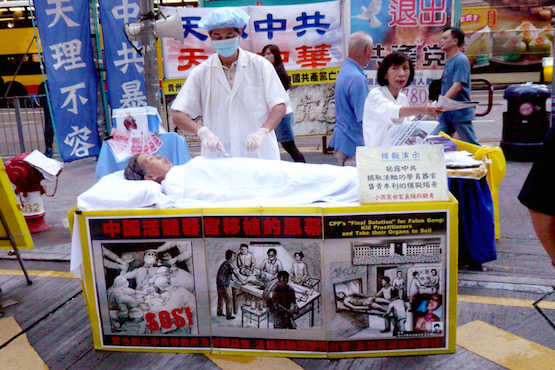 Falun Gong practitioners in Hong Kong do a mock forced organ harvest to raise awareness to what is occurring in the mainland where the spiritual practice has been persecuted by the communist government since 1999. Due to the "One country, Two Systems" policy people can freely practice Falun Gong in Hong Kong. (Photo by Cory Doctorow via Flickr /CC BY 2.0)

For more than three hours 62-year-old Zhu Junxiu described what she went through when she was imprisoned in China for her beliefs.

Beaten with electric batons. Injected with unknown drugs. Locked up in a small pitch-black room that was filthy with urine and feces for 40 days. Being chained with weights that were heavier than she was non-stop for a month and a half.

These are a few examples of what Zhu endured as guards tried to break her so she'd renounce her belief in the Falun Gong spiritual discipline which she has practiced since 1996.

Throughout the interview with ucanews.com, Zhu sat composed on a small stool in her Bangkok studio apartment that she shares with her husband. The Thai capital has been their place of refuge ever since they fled China in 2013. At the end of July the couple go to live with their son in the U.S.

When Jiang Zemin, the then leader of the Chinese Communist Party, ordered the suppression of Falun Gong in mid-1999, Zhu was a high-level public servant for the Chengdu City Qingyang District Taxation Bureau. She was also a Party member.

Zhu tried to appeal to the central authorities in Beijing several times to tell them that it was wrong of the government to persecute Falun Gong. Zhu's efforts initially resulted in her being fired from her job and losing her party membership.

From 2000 to 2006 Zhu was detained or imprisoned on nine separate occasions for a combined period of nearly three years.

For each detention Zhu said she and other practitioners had a large tube of blood drawn into a tube. Her heart, liver and kidneys were also checked by medical professionals. She said that soldiers were often present during these examinations. Both Zhu Junxiu with her husband Yu Jiaqing were imprisoned in China because they practice Falun Gong which consists of meditative exercises and a moral code centered on truthfulness, compassion and forbearance. (ucanews.com photo)

For American investigative journalist Ethan Gutmann, it was the experiences of refugees like Zhu that convinced him that large numbers of imprisoned Falun Gong practitioners were being killed by the Chinese state for their organs.

Over a seven-year period, Gutmann and a researcher traveled extensively — including to Thailand — to interview over fifty practitioners who survived China's "Laogai System" and managed to escape abroad.

"The easiest call was if you had a practitioner who was young and healthy — no physical problems — who was given an exam that only focused on the retail organs," Gutmann told ucanews.com in a phone interview.

"That meant blood tests — usually a lot of blood was taken — and an ECG test, a urine test, a lot of probing around the abdomen.… There were no ears, eyes and throat exam, no checking of the genitals, nothing," he said. "None of the standard health checks … when you hear that, it is pretty clearly an only-organs test."

Criminal detainees did not go through comparable tests and examinations, he explained. Chinese health officials have said, in the not too distant past, that they sourced their organs from criminal prisoners sentenced to death.

Gutmann also interviewed former security officers and medical professionals with familiarity of transplant practices in China. Among them was Dr. Ko Wen-je, a Taiwanese surgeon and current mayor of Taipei, who told him that organ sources from at least one mainland hospital were not from executed death row criminals but imprisoned Falun Gong prisoners of conscience.

"Organ harvesting was a military hospital initiative in the beginning, certainly in the 80s [and 90s], because they handled the executions," Gutmann said. "When the transplant industry exploded in the 2000s with the influx of Falun Gong [into the prison system] and [improvements in copying Western] anti-rejection drugs, you then start having the armed police become involved. Over time the civilian hospitals jumped in," he said.

There were very high hepatitis B figures among the general prison population but not among the tens of thousands of imprisoned Falun Gong prisoners who were known for their clean living, Gutmann said.

"By and large Falun Gong are the desirable organs," he said. "Hearts kidneys, livers and lungs are the big ticket transplants." Claims surfaced in 2006 that disappeared Falun Gong practitioners were being killed by the state for their body organs which were sold mostly to foreign transplant tourists. (Photo by pixabay.com)

In the West, a patient may wait years for a matching organ to become available from a donor but in China a patient can acquire an organ within the space of a few weeks.

Gutmann estimates that the Chinese transplant industry is now worth somewhere around $7 to 9 billion annually. The Chinese state officially says that its hospitals conduct around 10,000 transplant per year.

"The 10,000 figure is just a throw-away number that has no meaning at all," said Gutmann.

The real figure, he said, is dramatically higher: around 60,000 to 100,000 transplants performed per year in China, with an emphasis on the higher numbers. These figures come from a report released June 22 that Gutmann co-authored with prominent Canadians David Kilgour, a former Canadian Secretary of State (Asia-Pacific), and David Matas, a respected human rights lawyer.

"[The Chinese authorities] will say what they think they can get away with — i.e. numbers of transplants that they do each year — so they say 10,000 or less. But they didn't factor in the possibility that researchers would add up and check on all their hospitals," Gutmann said.

The day after the report's release, Matas told a joint subcommittee of the U.S. Congress that the report's estimates came from studying data derived from 700 plus hospitals throughout China.

"When we look at hospitals and doctors one by one, a number of features jump out," Matas said in his testimony. "One is the sheer volume of transplants. The total number of transplants which officials ascribe to the country as a whole, 10,000 a year, is easily surpassed by just a few hospitals," Matas said.

"That increased discrepancy leads us to conclude that there has been a far larger slaughter of practitioners of Falun Gong for their organs than we had originally estimated," he said.

Matas also added that smaller numbers of other prisoners of conscience such as Uyghurs, Tibetans, and select House Christians, have been killed by the state for their organs. Morning Falun Gong exercises, in the south-eastern Chinese city of Guangzhou sometime prior to the persecution of the practice, which began in 1999. (Photo from Wikipedia Commons)

The Chinese authorities have called the 817-page report titled "Bloody Harvest/The Slaughter: An Update" a fabrication, just as they did similarly about a 140-page report published in 2006 by Kilgour and Matas where they first deducted that the communist state was killing off large numbers of imprisoned Falun Gong practitioners for their organs.

Amidst the growing controversy, Chinese officials over the past decade have made declarations that they have been reforming the country's transplant practices.

In 2014, Chinese officials said that they were moving away from relying on death row prisoners as a source of organs and switching to a voluntary donation-based system with a registry. In 2015 the New York Times reported that prisoners were just being reclassified as "citizens" who were "volunteering" their organs.

Meanwhile for a typical Chinese person, the idea of voluntary organ donation after death, as per in the West, is culturally taboo.

Professor Maria Fiatarone Singh, from the Faculty of Health Sciences/Sydney Medical School at the University of Sydney, told ucanews.com that: "There is no possible way that this number of organs [as stated in the report] could be coming from the new organ donation registry set up in China."

The professor added that there is "no way that executions of criminals could supply this many organs," particularly when their health status is taken into account.

To meet organ demand, Fiatarone Singh said there must be an unnamed and unseen pool of "donors" adding that "there are many indications that these are prisoners of conscience, primarily Falun Gong, but also other religious minorities." An image from p. 308 of "Bloody Harvest/The Slaughter: An Update" of Wuhan Union Hospital which claimed it did the most hearts transplants in China for 2014, said the report. (Screengrab of report)

In light of the report's findings, Benedict Rogers, the vice-chair of the Conservative Party Human Rights Commission in the United Kingdom, said that there now needs to be an independent enquiry into organ harvesting in China.

"An enquiry is needed with a mandate from a government or a group of governmental bodies or ideally by the United Nations," said Rogers.

Such an enquiry was one of the recommendations for the British government put forward in the commission's report "The Darkest Moment: The Crackdown on Human Rights in China 2013 – 2016." Another recommendation was for the UK to initiate legislation that would make it illegal for British citizens to travel to China for an organ transplant. Israel, Spain, and Taiwan already have such laws in place.

Gutmann sees such measures as the banning organ transplant tourism being necessary to address the problem while adding that to solve it requires the medical world — in the form of The Transplantation Society (TTS) — and the political world coming together.

"The TTS has to do the things that are necessary," Gutmann said of the body that describes itself as an international forum for the world-wide advancement of organ transplantation.

"The TTS have to cooperate with political systems across the Western world which simply can't afford to have their own citizens be part of a genocide," he said.

"Western governments can't have their own citizens implicated in a genocide. It is that simple."

During his testimony at the June 23 congressional hearing former TTS president, Dr. Francis Delmonico, did not dispute the findings of the new report but said he was optimistic that a new generation of Chinese surgeons was reforming the country's transplant industry.

But Gutmann said the report's findings reveal that TTS's efforts in China to promote ethical reform have been fruitless.

"Going in with a soft engagement plan has worked for the TTS in other countries which are developing their transplant practices but it hasn't worked in China," Gutmann said.

"When we start seeing transplant hospitals shutting down, then the TTS are being effective. That is not happening now."

The committee hearing and the release of "Bloody Harvest/The Slaughter: An Update" followed the U.S House of Representatives unanimously passing a resolution on June 13 that urged China to stop harvesting the organs of prisoners of conscience and to end the persecution against Falun Gong. The European Parliament passed a similar resolution in 2013.