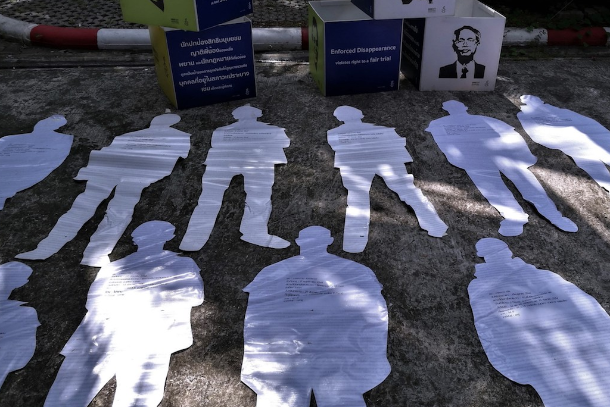 The crime of enforced disappearance is a global problem. (Photo: Amnesty International Thailand)

“Please deliver the dead body to this address — 10/E/Modhubag (Dhaka). The mother is waiting.”

The gruesome message was written on the wall of a building in the central part of Bangladesh’s capital. It was a heartbreaking appeal from a mother to get back her son dead or alive after he became a victim of enforced disappearance, allegedly at the hands of law enforcement agents.

The image, which went viral on Facebook days before International Day of the Victims of Enforced Disappearances on Aug. 30, shocked many.

On the day, dozens of relatives of victims gathered in front of the National Press Club in Dhaka to commemorate the day and demand the state let them know the whereabouts of their loved ones missing for years. It was organized by Mayer Dak (Mothers Calling), a forum representing the families of victims of enforced disappearances.

Jharna Banu, one of the participants, said she has been desperately searching for her husband since 2011, from pillar to post, all in vain.

“This is an unbearable pain. Our son cries every day for his father. Extreme despair has engulfed the family,” she told the rally, in tears.

In recent years, the rally and human chain have become a regular feature on the day, while tragic tales of disappearances and devastation frequently feature in the media. But it has neither moved the authorities to disclose what happened to those missing nor stopped this horrific, abominable culture of enforced disappearances in Bangladesh.

From January 2009 to July 31 this year, 572 people have been reported forcibly disappeared, allegedly by security forces and law enforcement agencies, according to a Human Rights Watch (HRW) statement on Aug. 28. While some were eventually released, shown arrested or discovered killed in extrajudicial shootouts called "crossfire," the whereabouts of many remain unknown.

It noted that the majority of victims are opposition leaders and supporters and the timeline shows all these disappearances happened since the Awami League returned to power after winning the December 2008 national election. The government, however, has repeatedly denied the complicity of state security agencies in forcible disappearances or extrajudicial killings in the South Asian nation. It also failed to respond to calls from families of the victims to investigate disappearances.

Despite recurring calls from rights groups, the country has yet to sign or ratify the International Convention for the Protection of All Persons from Enforced Disappearance (ICPPED) even though it is a member of the UN Human Rights Council.

Apart from expressing some sporadic concerns, UN rights bodies including the Working Group on Enforced or Involuntary Disappearances, the Committee Against Torture and the Human Rights Committee have done too little to press Bangladesh hard for an end to enforced disappearances or to sign ICPPED.

Enforced disappearance is not only a violation of international law but also a crime against humanity. It has devastating effects on victims and causes perpetual suffering for their families and communities.

In Bangladesh, there have been some cases involving the return of people after months of enforced disappearance — abused and traumatized, physically and psychologically. The fear and trauma run so high that they never open their mouths to tell people about what happened when they went missing.

This ugly practice of tormenting people through abductions and disappearances might be utterly deplorable in a modern world, but it is tragic reality in many parts of the globe.

More than a rights violation against an individual, enforced disappearances have frequently been used as a strategy to spread terror within the whole of society, the UN said on Aug. 30.

“The crime of enforced disappearance is rife across the world,” UN secretary-general Antonio Guterres said in his message commemorating the day.

“We see new cases almost daily, including the disappearance of defenders of the environment, who are often indigenous people. Meanwhile, the excruciating pain of old cases is still acute as the fate of thousands of disappeared people remains unknown, making the crime a continuous presence in the lives of the loved ones of the lost.”

This crime against humanity is truly a global problem and not limited to any specific region. From military dictatorships to communist regimes and democratic states, enforced disappearance is a tool of abuse and terror to muzzle dissent, gag freedom of speech and annihilate opposition.

The Catholic Church has maintained its position against the death penalty as well as unlawful and inhuman practices such as enforced disappearance, abuses and custodial and extralegal deaths.

However, in recent times local churches and the Vatican have fumbled in criticizing governments over enforced disappearances, be it in the Christian Philippines or Muslim-majority Bangladesh.

In Bangladesh, there are apparently no cases involving disappearances of Christians in recent times. But this cannot be an excuse for Christians and their leaders to remain silent over such violations of human rights as the minority Christian community is an integral part of society and the nation.

In the Philippines, the Church must do much more than merely issuing statements against the scourge of disappearances that continue to make headlines under the regime of strongman Rodrigo Duterte.

Whether the victims are Christian or non-Christian, it is the moral duty of a good Christian to denounce the horrific culture of forcible disappearances in words and deeds.

The Church and the international community, including UN bodies and powerful democratic states in the West, must take the issue of enforced disappearances seriously. They must use their influence to denounce enforced disappearances, to ensure justice for the families of victims and to bring an end to such a brutal violation of human rights.