There are 3.45 million child workers in the impoverished nation, says survey 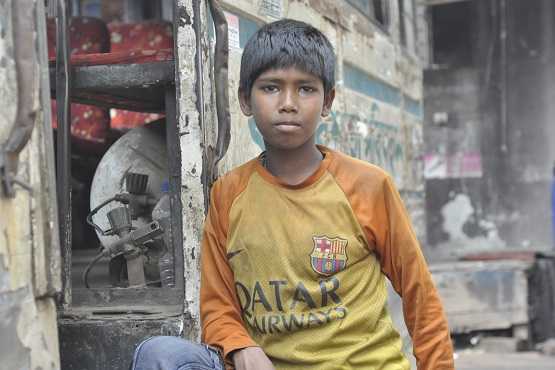 Muhammad Sohel, 13, is a transport worker in Dhaka. He works 17-18 hour days. (Photo by Stephan Uttom)

It's Friday morning in Dhaka and 13-year-old Muhammad Sohel waits inside a public transport van to begin another day's work as the driver's assistant.

Sohel's job is to attract passengers and to their collect fares as the vehicle moves through the streets of Bangladesh's capital.

Friday is a day of prayer for Muslims and considered a day off in this Muslim-majority country. For Sohel it means he will have to deal with fewer passengers but the day will be long like most others.

"I start work at 6 a.m. and continue until around midnight," says Sohel, who has worked as a driver's assistant for three years.

Every month, Sohel earns about 7,000 taka ($90). After paying for his own costs, he sends money to his father and two younger siblings who live in a village in central Bangladesh.

Prior to working in the city, Sohel lived with his family and attended a free primary school run by a non-government organization. His life changed drastically in 2012 when his mother died.

"With my mother's death my schooling came to end and I came to Dhaka with my elder brother to support my family," he says.

Sohel says it hurts to see children his age go to school.

"I had a dream of becoming a sportsman … Now, I've ended up becoming a van helper, possibly forever," he says. Child workers are often physically and psychologically abused and in most cases they are poorly paid. (Photo by Stephan Uttom)

Muhammad Aslam, 14, has been working in a mechanic's workshop in old Dhaka for the past four years.

Aslam's primary job is welding metal and helping to operate a heavy machine that makes auto-parts. His work day begins at 6 a.m. and finishes at around 10 p.m.

Coming from a very poor family, Aslam has never seen inside a classroom.

"Children my age go to school and I also wanted to go to school but my parents couldn't afford it and sent me to work," says Aslam.

Many Bangladeshi children are in a similar situation.

The National Child Labor Survey Report by Bangladesh Bureau of Statistics says that there are 3.45 million active child laborers.

The survey was published last December and it reveals a rise in number of child workers since the last survey conducted in 2003, when there were 3.2 million recorded.

About 1.2 million children are currently engaged in various hazardous forms of child labor including tanneries, mechanical workshops, construction, and warehousing, the survey says. The figure was 1.3 million in 2003.

Over the past decade, the government has managed to make two sectors — the garment and shrimp industries — free of child labor, the report says.

The government in 2012 had aimed to eradicate child labor by 2016. That time frame has been pushed back.

"We must admit that we have failed to fulfill pledges we made. During a regional meeting of South Asian countries in Colombo last December, we reset the goal for eliminating child labor from Bangladesh to 2019," said A.K. Masud, a joint secretary at Bangladesh's Labor and Employment Ministry.

Watch this ucanews.com video for more on the plight of child workers in Dhaka.

Over 30 percent of Bangladesh's 160 million people live on less than $2 per day, making poverty the biggest driver of child labor.

Although primary education is free in state-run schools, poor families who can't manage to reach government facilities, often send their children out to work.

"Families struggle to survive every day and need to find resources for one or two meals a day. Any kind of work, no matter how low the pay, is needed to cover their basic needs," child rights activist Marist Brother Cesar Henriquez told ucanews.com.

"And all members of the family capable enough will work for the family's sake," he says.

Often child workers are badly treated by their employers. Apart from being poorly paid they are at a high risk of physical and psychological abuse. Sometimes the abuse can be fatal.

"Children in the workplace are at the lowest rank of power. They are treated as people with no dignity. Apart from health and safety risks, they face insults, humiliations and physical abuse," says Brother Henriquez.

The government and non-government organizations need to take effective action like providing interest-free loans so poor families can start a small business making it possible for them to send their children to school, Chowdhury says.

"More efforts are needed to enforce the law and more campaigning is needed to educate people against child labor," he added. Instead of school, 13-year-old Sabbir Hossain’s parents sent him to work. (Photo by Stephan Uttom)

To tackle child labor, the Catholic Church and other Christian groups have focused on providing children from poor communities with an education that will provide them with vocational skills.

"Most of our projects focus on economic and livelihood development of poor communities," says Shiba Rozario, senior communication manager at Caritas.

"We incorporate our child protection policies into our projects, encouraging parents to send their children to school, not work," she says.

Caritas Bangladesh has been providing a basic education to over 150,000 unschooled children from disadvantaged and marginalized communities in Bangladesh.

Thanks to funds from the European Union, Caritas is doing this through 1,000 schools set up across the country.