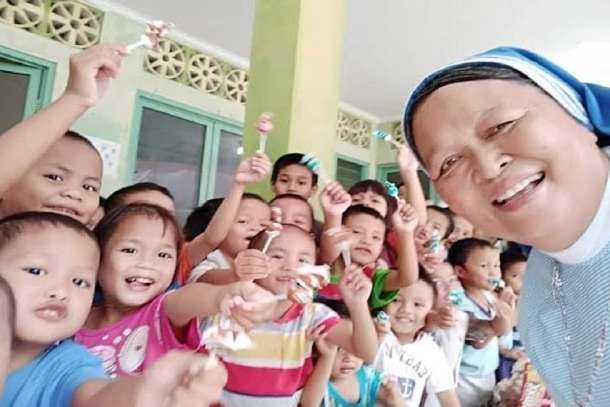 Franciscan Sister Klara Duha with some of the children at Faomasi St. Elisabeth Orphanage in Nias, North Sumatra. (Photo supplied)

For over a decade Franciscan Sister Klara Duha has been the guardian angel of more than 1,000 unattended children in Nias, North Sumatra

Since 2006 she has taken care of children who suffer disabilities, hydrocephalus and malnutrition and whose mothers were mentally ill or divorced. Many of the children were rejected by their families, some even found on trash sites.

“I pity them. I just can’t let innocent children suffer or be abandoned. I must save them,” Sister Duha, 65, told UCA News.

She dreamed of serving humanity from a young age but did not know how to do it. After finishing senior high school in her village, she chose to become a nun to fulfill her dreams. But her parents were against it because she had to help them.

Finally, in 1977 she found the way by joining the Franciscan congregation and her parents supported her.

Her venture into helping children began several years after becoming a nun. She found a one-month-old infant who was suffering hydrocephalus – fluid on the brain – and her family were ashamed to take her to hospital. The parents thought it was a curse and wanted to throw the baby into the sea.

Sister Duha took her to St. Elisabeth Hospital, run by the Franciscan congregation in Semarang, Central Java, to get surgery.

After the child was healed, the nun handed her over to the parents, but they refused to take her because she looked terrible. “I decided to take care of the little girl myself,” she said.

Some priests saw that the child was well cared for, so they asked Sister Duha to take care of other children in their parishes who suffered from disabilities and hydrocephalus. Eventually, more and more children were entrusted to her guardianship.

Sister Duha, who received final religious vows in 1988, said she accepted them because their parents were too poor.

“Many children in Nias suffer from hydrocephalus, hare lip and some are paralyzed. Many parents claim it is a curse, so they don’t treat their children,” she said, adding she had been to villages to take the children into her care.

Because of her passion in taking care of the neglected children, Sister Duha was recognized as a guardian angel.

She is a mother to many children at Faomasi St. Elisabeth Orphanage, which she founded in 2008 with support from the Rotary Club.

She previously planned to build a clinic to help any sick people in Nias, but as many of the sick were children she changed her mind and established an orphanage to accommodate and treat them. Now the center is a home to 85 children aged between two months and 18 years. Some 60 of them attend schools from elementary to senior high level.

“I do not have second thoughts when accepting the children, although I don’t have enough money. It’s a humanity issue that all of us must care about,” the nun said. The power of prayer and support

Sister Duha said taking care of abandoned and sick children brings her joy and such joy overflows from a prayerful life coupled with the generosity of the donors.

“I am as poor as the children but God has motivated donors to help them,” said the nun, who also comes from Nias.

She chose the motto "Love God, love neighbor" (Luke 10, 25-37) for her service. Love for God is shown through prayer, and love for neighbors is shown by helping them. She chose Faomasi, which in the Nias language means love, as the name of the orphanage.

“God brings them to me and I must help them. Several people said that I am crazy because they saw me not having money, yet I can help the children,” said the nun, who is the second child among 10 siblings.

She said the ability to help children was God-given and she accepted it because it was God’s mission through the Church to take of the little ones.

The nun said she only has faith and willingness to help people, and God works the rest such as through donors including a German doctor who contributes monthly for the orphanage, and many other individuals and groups.

A multipurpose building and a clinic were built by Kompas, Indonesia’s biggest newspaper, which enables her to offer a variety of services for poor children.

She has yet to receive any support from the local government.

“I am grateful that many Catholics and organizations help me,” she said, which makes her work easy. One thing that saddens her is that the relatives of the children have not visited them at the orphanage.

Helped by eight people, Sister Duha runs the day-to-day operations of the center.

One of the 85 children at the center is Noverdelina Duha. The 14-year-old girl was saved by the nun when she was one month old and suffered from hydrocephalus.

“I could have died or been thrown into the sea by my parents if it was not for Sister Klara. I survived because of her love,” said the high school student, adding that she helps the nun by taking care of and educating her young brothers and sisters in the orphanage.