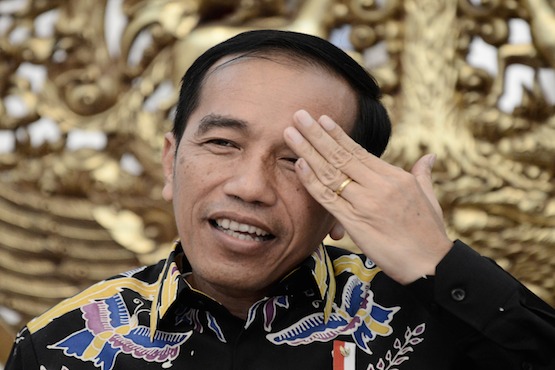 Despite Indonesian President Joko Widodo being popular among voters, his vision of a secular Indonesia has made him some powerful enemies. (Photo by Goh Chai Hin/AFP)

A Muslim woman in her late 60s cracked a joke while serving customers at a small food stall she owns in Jakarta.

“These people are foolish, they think they can beat this skinny man?” she said referring to politicians on a television show criticizing the slightly built President Joko Widodo.

Widodo came to power in 2014 after defeating his rival Prabowo Subianto, a former military commander of forces in East Timor during Indonesia’s occupation.

Three years into his presidency and with less than two years to go before the next election, Widodo is tipped by many to win a second term. Potential rivals include Subianto, Agus Harimurti Yudhoyono, son of former president Susilo Bambang Yudhoyono, and new Jakarta, governor Anies Baswedan.

Some things require more attention, such as human rights abuses, particularly in Papua, unemployment and the still high number of people living in poverty, but in general most Indonesians are satisfied with his performance and want him to seek a second term.

That is bad news for those looking for ways to get rid of him.

So if his approval rating is so good, who is trying to oust him and why?

In a nutshell, they are his political rivals, as you would expect, but also corrupt officials, and — more significantly — Muslim hardliners.

They appear to be a disjointed bunch, but signs have emerged of a loose alliance between them to attack Widodo. In September, some of these hardliners stirred up a hornets nest accused Widodo of cozying up to communists and encouraging the return of communist influence. Merely speaking about communism in Indonesia is taboo following communist purge in 1965 where more than 500,000 people were reportedly killed after what was perceived was a Beijing backed coup attempt.

The accusation tried to undermine Widodo’s closer cooperation with China and discredit the president by trying convince ordinary Muslims that he is pro-communist and extremely dangerous to Islam.

The ire of hardline groups was stoked further on Oct. 24 when parliament passed a law introduced by Widodo allowing the government to ban mass organizations in a move, which was seen as targeting radical organizations. It allowed the complete disbandment of the radical Islamic group, Hizbut Tahrir, which sought a caliphate. Other radical organizations such as the Islamic Defenders Front (FPI), which often resorts to violence to promote its cause, are expected to be next on the hit list.

The passing of this law rekindles a fire left smoldering since the 2014 presidential election. It forces Widodo’s main rival Prabowo Subianto and his Great Indonesia Movement Party (Gerindra), the Islam-based Justice Prosperous Party (PKS) and National Mandate Party (PAN)-to work that much harder against Widodo whom they often claim discriminates against Islam and its clerics.

During this year’s Jakarta governor election, these parties backed former education minister Anies Baswedan, and held nothing back to oust Christian governor Basuki Tjahaja Purnama, popularly known as Ahok, an ally of Widodo. Backed by the opposition and radical groups, Baswedan won the race and was sworn in as the Jakarta governor on Oct.16.

Many have seen this victory, which saw opposition parties and hardliners use anti-Chinese and religious sentiments, as a precursor to ousting Widodo in the next presidential race.

Already, Muslim leaders who led a series of mass protests against Ahok have called on their followers to fight against the new mass organization law, which they attempts to criminalize Islamic preaching.

Boni Hargens, political analyst from the University of Indonesia, said opposition parties and Hizbut Tahrir along other organizations with similar ideologies will use the law to delegitimize the government.

He said attacks on the government will intensify during regional elections in 2018, in more than 100 provinces, districts and municipalities. The anti-Islam issue will be used as a weapon against pro-government parties, especially in East, West and Central Java.

Pluralist concept is a threat to Islam

Accusations that Widodo is an ally of Chinese government, a pro-communist, and anti-Islam, are not true. They are merely desperate expressions of a deep-rooted fear of his strong push for a pluralist society, a concept completely unacceptable to fundamentalists.

Sooner after taking office, Widodo launched his “mental revolution” concept — ways by which Indonesians can improve their way of thinking and behavior.

Fundamentalist Muslims see it as an adoption of Karl Max’s socialist communist concept in Europe against religious rigidity. They also see it as propaganda from China’s Communist Party to brainwash people into turning their backs on religion.

Widodo’s desire for a pluralist Indonesia is a threat because it obliges the Sunni majority to respect the rights of Ahamadiya, Shia, and liberal Muslims.

His efforts while in local government to prevent the introduction of divisive policies, such as introducing Islamic Sharia-style edicts, was also seen by Islamists as an attack on religion. Hardline Muslims see enforcing sharia as a right, but Widodo sees it as undermining his pluralistic goals.

This so-called attack prompted the Indonesian Muslim Clerics Forum to issue an unsuccessful fatwa or edict in 2014 telling people not to vote for Widodo. It is possible a similar edict will roll out sometime soon to pressure Muslims not to vote for pro-pluralism leaders.

Widodo and his supporters must know that even though such accusations are irrational, they have been effective in influencing educated voters in Jakarta, hence Anies Baswedan’s victory in Jakarta this year.

Widodo must also continue to educate clerics on a pluralist and peaceful concept of Islam, and prevent mosques from being used for political gain as what happened in the Jakarta poll as most Muslims believe what they hear from preachers, no matter the level of their education.

There is also a pressing need to educate Muslims as a whole on the meaning of pluralism, and that religion is not merely symbolic but should add value to human dignity.

For Christians and other minority groups, it is time to get more involved in politics, and it is a moral obligation to stand behind the president to ensure society accepts all religious differences.