'The first shall become last, and the last first'

Servants of the poor in front row at pope's installation 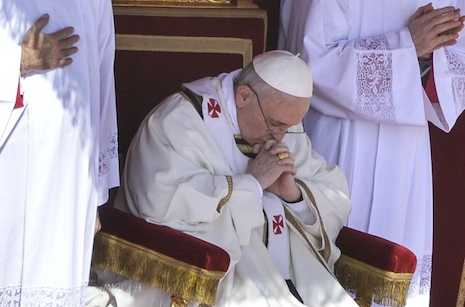 On his inaugural Mass in St Peter's Square on Tuesday, Pope Francis demanded that three people take seats in the front row, ahead of heads of state and princes.

José María del Corral, a teacher who launched an interfaith program for students, Sergio Sanchez, who works with slum dwellers in Buenos Aires to help them recycle waste, and sister Ana Rosa Sivori have all known Cardinal Jorge Bergoglio for decades – and were expressly invited by him to his official installation as Pope Francis.

Of the three, sister Ana Rosa is probably the one who knows Bergoglio the best.

A missionary in Thailand for 46 years with the Daughters of Mary Help of Christians (the female branch of the Salesians), she is actually a distant cousin of the pope and has known him since she was a child.

Since then, they started meeting every time she visited Argentina, and he often gifted her with books.

“We are very familiar, we talk about vocations, religious life and so on.”

Sister Ana Rosa says that when she arrived in Rome and met her cousin, now Pope Francis, he addressed her as he always did in the past decades “What are you doing here?”

She says the new pope is a simple and humble person, almost shy as he doesn't enjoy being in the limelight and showing off. “He always lived as a poor man.”

In 2005, Bergoglio was reported to be the key rival to then-Cardinal Joseph Ratzinger for the papacy. “Everyone told me 'it's gonna be him,” she says.

But this time, according to sister Ana Rosa, Bergoglio had come to Rome feeling “secure,” thinking that he was too old to be chosen by the other cardinals.

“When I heard the news, I was moved and surprised. He wasn't being talked about. But I was also happy because the Church belongs to God and all human predictions had been surpassed.”

After hearing of Bergoglio's election, she asked her Mother Superior if she could come to Rome to be near her cousin – and thus ended up seated in the front row of St Peter's Square during the installation Mass.

In Thailand since 1966, she has lived in Bangkok and is now the vicar of a large community in Udon Thani, in the northeast of Thailand, where she oversees a professional school with over 2,400 students.