The first church for transgenders in Pakistan

Often shunned by mainstream society in the Islamic republic, transgenders say they deserve to listen to the word of God 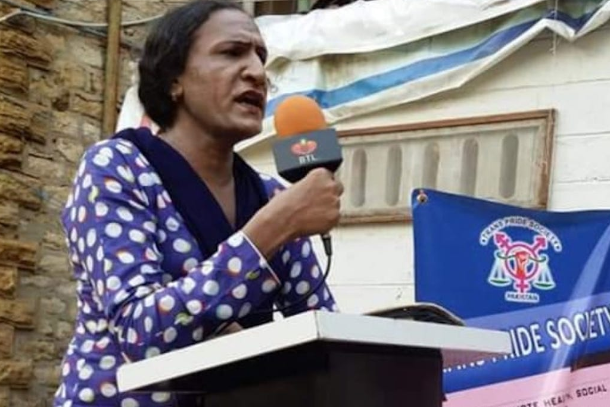 Every Friday at 5pm, Nasira Gul heads to St. Jeremiah Church with her transgender friends.

They join parishioners sitting on a red carpet designed with white flowers and borders. A wooden cross decorates the empty walls of the church in Mehran town of Karachi, Pakistan’s seaport city.

Two female pastors lead a 30-minute Bible study before conducting a service that includes administering Holy Communion to transgenders. The community observed the memorial service of a deceased transgender on Aug. 21.

“We couldn’t get a chance to visit other churches to recite the Bible and worship like other Christians. God is love. He doesn’t discriminate,” Gul told UCA News.

“People stare at us when we visit other places of worship. We feel we are among unknown people. We feel guilty for confusing worshippers. Separate churches can help us in praying easily. Everybody deserves to listen to the word of God.”

Gul is one of 20 transgenders who have been offering weekly prayers at St. Jeremiah Church since last month. Pastor and rights activist Ghazala Shafique initiated the prayers for transgenders at her home. The 56-year-old, an ordained deacon in the Church of Pakistan, has commissioned Gul and another transgender to invite more Christian transsexuals.

She also provides weekly dinner and a stipend of 500 rupees (US$3) to each transgender to hire a rickshaw for visiting the “world’s first church for transgenders.”

“They are mocked on public transport and thus prefer private vehicles. The word of God is very clear but the attitude of people and the Church is different. Friday service suits them due to their busy schedule of attending weekend programs. They trust me for being a female as well,” said Shafique, who plans to establish a Bible school for all including transgenders.

Shafique said her husband has received phone calls from people asking if she would also demand a separate graveyard and a school for transgenders. “Pastors question transgenders for wearing jeans in church, suggest that they should sit like women, avoid lipstick and wear female clothes that must include dupatta (long scarves). They are also rejected for Holy Communion for being unholy,” she said.

“When I accompany them to other churches, worshippers stare at me as well. Churches should open their doors and institutes for them. Long-term planning is needed to educate people and accept them as normal family members.”

St. Jeremiah Church's initiative has drawn a mixed response from many Pakistanis on Facebook.

However, Church of Pakistan Bishop Sadiq Daniel of Karachi rejected the ministry.

“The so-called opportunist pastor has no connection with us. Her husband, a pastor, illegally occupied one of our hostels for 15 years. We fired the couple,” he told UCA News.

“We reject the church for transgenders as well. Shafique is trying to manipulate the challenges of the transgender community in the name of religion.”

Sabir Michael, a lay Dominican, supported faith formation of transgenders but rejected the separate church. The president of the Peace Welfare and Development Association is planning a six-month training course for the transgender community in consultation with Cardinal Joseph Coutts.

“Our ultimate goal is to integrate them in general churches without discrimination. This is crucial for social transformation,” he said.

According to the 2017 census, 12,000 transgender persons are living in Sindh province in southern Pakistan. These include 2,000 Christian transgenders.

In 2009, Pakistan became one of the few Islamic countries in the world to recognize transgender people legally.

In 2018, an NGO launched the first school for the transgender community at the Alhamra Open Air Theatre at the Gaddafi Stadium of Lahore. It offers skills-based training.

Despite the passing of several laws and policies to protect transgender people's rights, they continue to suffer prejudice and violence, say rights groups.

Last week the body of a transgender was found in a flat in federal capital Islamabad after lying there for 10 days. In April, a 15-year-old Christian transgender was gang-raped and murdered in Faisalabad city of Punjab province.

In 2016, the Shemale Association for Fundamental Rights initiated construction of the first LGBT-friendly mosque and madrasa in the suburbs of Islamabad. Following opposition in the neighborhood, the local cleric took over the building a few months later.

Muslim transgenders complain of being insulted and mocked and stopped from entering mosques. Transgenders are questioned about Islamic practices and proclamations, they say.

Gul thanks Pastor Shafique for supporting Christian transgenders. “We thank her for leading us and offering us catechism and Bible study in our own church. Now we can freely recite the Bible. Guidance by such church leaders could have saved our souls. We may have lost our way but can be guided and share the grace of God,” she said.