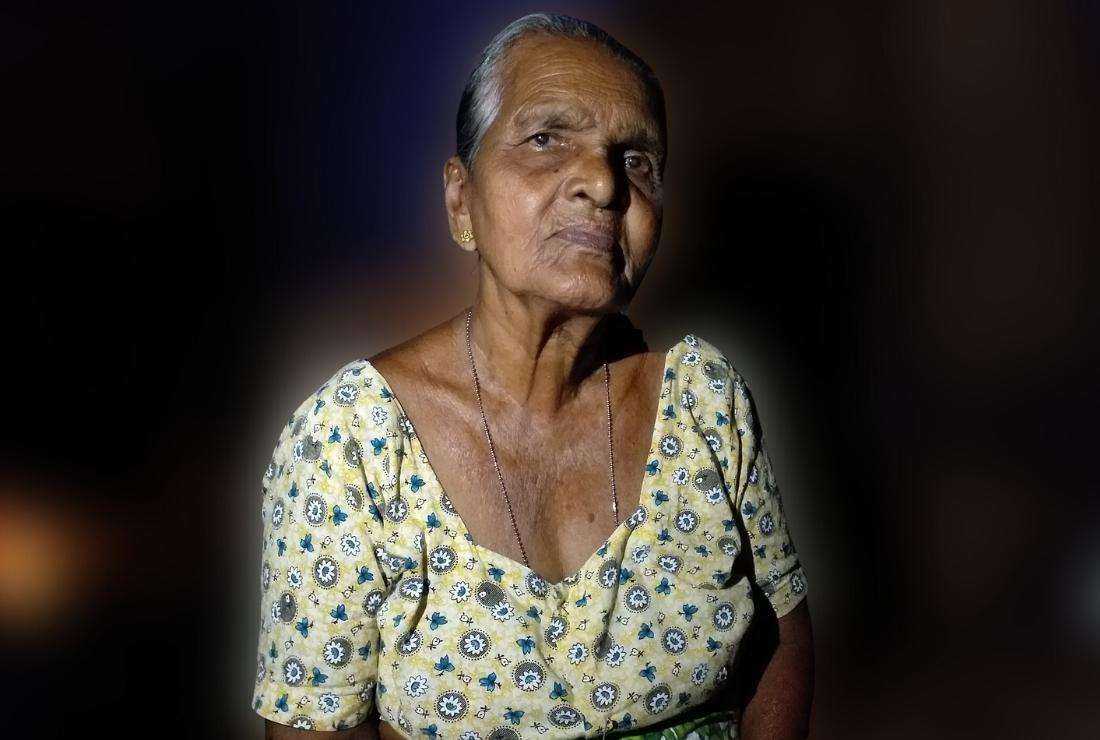 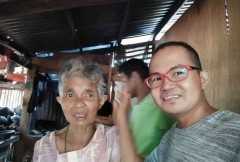 Every day around 7pm, octogenarian Sembuwalage Mary Hariyat faithfully recites the rosary and litany from her old prayer book with lightly frayed edges and irregular-shaped pages.

She is never alone as she settles before the statues of Mother Mary and the saints at home. Among those around her are some of her growing brood of 24 grandchildren and 19 great-grandchildren, not to mention her eight children.

“My prayer book and rosary are my weapons in times of joy and sorrow," says the 82-year-old from the tourist village of Negombo, known as the "little Rome" of Sri Lanka because of its predominantly Catholic population.

The majority of some 150,000 Catholics in Negombo depend on fishing, just like many other coastal communities in the island nation. Despite a life hit hard by poverty, thousands of Catholic mothers like Hariyat are considered important in building up the local Church. Hariyat goes to look after her children and her grandchildren sitting on the back of a motorbike. (Photo: Quintus Colombage)

Hariyat never forgets to neatly arrange a small dish of raw white flowers and light an oil lamp before her prayers at home. On some days, she will burn incense sticks according to traditions passed down from generation to generation.

But above all, Hariyat loves to teach the kids prayer rhythms and styles.

Her son Liyanage Samantha said: "It is our mother who taught us rhythms of all prayers. We learned every prayer from her. Now she is teaching our children and their children too," he said.

Her sons, daughters and their families credit her for teaching them how to live their Catholic faith.

"I stay with one child for a week. That's how I divide my time among all my eight children, week after week. If a family member is sick, I stay longer to help and serve in that house," she says.

Every word she utters hints at how grateful she is to God for everything she’s got.

Hariyat prays with her grandchildren at Kaththara Church, 240 kilometers from Negombo where many faithful experience miracles like her. (Photo: Quintus Colombage)

"God has abundantly blessed me and all the members of my large family," she saiys.

In February 2021, Hariyat suffered a severe heart attack and had to be hospitalized.  She says God and Mother Mary “stayed close to her during the terrible time” and if not for their blessings she would have been long gone.

Like a true Sri Lankan Catholic, whenever she or a member of the family faces a problem, Hariyat takes a vow to visit national shrines on a special pilgrimage.

Most of the time it is Our Lady of Madhu, a Marian shrine located in a dense forest in Mannar district, some 220 kilometers from Negombo. The shrine is considered the holiest Catholic site on the island.

Hariyat has been attending the August festival at the shrine since she was 20 years old. She even visited during the height of the Sri Lankan civil war, when the shrine was surrounded by refugee camps and shelled many times.

After recovering from the heart attack, Hariyat accompanied by the family of one of her sons visited Our Lady of Madhu last June. Sembuwalage Mary Hariyat, 82, recites the rosary and litany in her old prayer book every day around with her grandchildren in front of Mother Mary's statue at home. (Photo: Quintus Colombage)

Her son too had recovered from a major illness even though the doctors had said he could not be cured. He could not stand or do any work and suffered unbearable pain that prevented him sleeping. Doctors said some tissue lining his spine was torn and could not be rectified.

Hariyat recalled praying to Mother Mary for months to heal him. She believes that Mother Mary intervened at her request.

"My son had a major operation and the doctors wanted about 600,000 rupees (US$ 1,715) to carry out the operation. His children decided to hold a lottery to find the necessary amount," she said. "I continued to pray to God, Mother Mary to heal him and vowed to bring my son” to Madhu and Kattara churches in Mannar diocese.

Hariyat said no operation was required and even the doctors were surprised with her son’s miraculous recovery.

"For more than fifty years, I have been going to Madhu and Kattara churches with my children. I have experienced many miracles in my life," Hariyat said.

She remains as enthusiastic as ever about the pilgrimage to Hiniduma Calvary shrine and joins other Catholic faithful in walking around the small hill on which the shrine stands overlooking St. Anne's Church and the Gin River quietly flowing beside it.

Every village has a church and many streets have been named after saints.  (Photo: Quintus Colombage)

Life in a Catholic village

Hariyat’s house is located in a beautiful village called Pitipana nestled between the sea and a lagoon. It is a village of fishers and except for a few families, everyone else is Catholic.

Fishing has been the primary livelihood for people here for centuries. Hariyat’s husband Liyanage Sebastian was a fisherman and for many years she sold fish in the local market.

When Sebastian died suddenly in 2007, Hariyat said she felt alone in the world. It took months of prayer and mourning for her to recover.

He went to sea on his catamaran, and like all hardworking and brave fishermen, even during the most severe storms. The other fishermen in the village considered him strong and pious like St. Sebastian, whose name he carries, Hariyat says. There is a statue of a saint at the beginning of every village road. (Photo: Quintus Colombage)

They both worked hard to raise their family. "I still remember the long waits for him to come home from the sea. It is a dangerous job to fish, especially when there are storms. I use to constantly pray for his safety," Hariyat recalls.

They never had enough money or a bank account. “We lived on whatever money was earned by going to the sea every day,' she adds.

There used to be times when the children would be very sick and they spent sleepless nights. Her husband would still have to leave in the morning to earn some money to buy medicines.

“Until the coronavirus pandemic hit us, I used to go to the fish market to sell fish,” Hariyat claimed.

She still wears a traditional fisher woman’s dress comprising of a simple Hattaya (top) and a Redda, a cloth tied around the waist.  She always keeps her white hair neatly combed and tied back. She begins every week by attending Sunday Mass with the children.

Life in and around Negombo is heavily influenced by the Catholic faith. Over 90 percent of its residents are Roman Catholic — who otherwise make up just 6 percent of the country — and as a result, the church is quite an important building. The architecture is majestic and the church has some nice paintings.

But the peace was shattered and the residents woke up to a violent shock on Easter Sunday in 2019.

Simple folks like Hariyat and her family had never imagined they would witness such death and destruction left behind by the bomb attack on St. Sebastian's Church, Katuwapitiya.

Hariyat regularly visits the church on Thursdays to pray for the victims. She also makes it a point to visit the memorial at the church in Katuwapitiya dedicated to the 269 people, including 32 children, who lost their lives in the attack.

"Our brothers and sisters died because of their faith," she says.

There is a certain amount of rage one can sense among the villagers most of whom believe that the danger is not over yet. But the island nation has been caught up in another disaster, caused by its economic and political troubles. Many statues can be seen in Negombo. (Photo: Quintus Colombage)

Hariyat says she has now joined Kithudana Pubuduwa (Movement for Renewal of Christian People), a charismatic prayer group in her St. Mary's Parish that prays for the wellbeing of society and the country.

During Lent, she visited shrines across the island and joined in the singing of Pasam (Lenten hymns) together with the women of her village.

She was taught to sing Pasam by her late husband and continues the practice, which is not known to many now except by those of her generation.

These hymns are a kind of prayer and a call to repent for sins. Women's groups get together and sing at night during Lent.

In commemorating the passion, death and resurrection of Jesus Christ, Hariyat and the women observe numerous rituals. They sing to deepen the Lenten spirit in homes and in parish churches.

Negombo is heavily influenced by the Catholic faith. The city is fondly nicknamed ‘Little Rome’, where a number of Catholic churches were established. Many churches have some wooden painted ceilings as well as statues of various saints. Over 90% of the population of Negombo is Roman Catholic and as a result, the churches are quite important buildings in the city.. (Photo: Quintus Colombage)

Hariyat makes a cross with coconut leaves and displays it in her home to remember the crucifixion of Jesus.

"I see God in my life and tell others about him. I am committed to him," she said.

Her grandson, Liyanage Chinthaka, says she is no less than a living saint for the entire family.

"She constantly prays for all our extended families and is with us during all our difficult times," said Chinthaka.

She is the one who taught us to pray, shared parables from the Bible and her life experiences to help us understand God's love, he said.

"We all pray for God's protection and good health to her every day," said Chinthaka. “Our Grandma is a great gift from God to us.”

GODFREY DLIMA
everyday saints, not cannonised, real as can be, who's faith is prized, in answering need. God saves the world with simple lives
Reply

DR. THOMAS SCARIA
Really inspiring story from Quintus, UCANews! There are several untold stories of several saintly mothers in Church. Congratulations to UCANews for venturing into such a series of reporting on heroins!