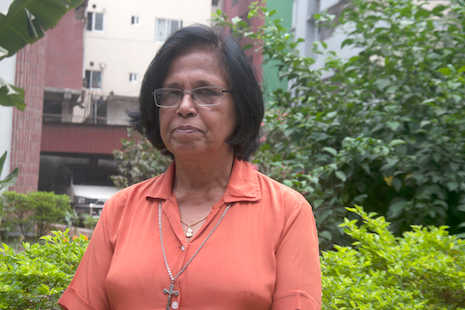 In Bangladesh, the human rights situation is growing worse by the day.

Bangladesh has seen an alarming rise in persecution and human rights violations in 2015, especially among the marginalized.

This year, five bloggers, writers and publishers were brutally killed by Islamic extremists. We have seen a series of barbaric child killings, deadly attacks on religious minorities including foreign volunteers, Shia Muslims, the and the Hindu community.

In a terrible turn of events, a Bangladeshi Protestant pastor and an Italian Catholic priest survived murder attempts recently. More than a dozen Protestant and Catholic priests are living in fear amid repeated death threats from alleged religious fanatics.

For centuries, people of the four major religions have lived side-by-side peacefully. But that co-existence is disappearing and sectarianism is growing while the government fails to identify those behind the deadly violence.

Sectarian terror has inflicted an added sense of fear among progressive people and minorities over alleged links to international jihadist groups like al-Qaida and the group that calls itself the Islamic State (IS).

The government has repeatedly denied accepting the presence and activities of international terror groups like IS in Bangladesh and blamed recent violence on foreigners and minorities on opposition parties. They have failed to prove either of their claims.

There are active local militant groups who might be linked to al-Qaida and the IS and accomplishing their agenda, but the government is determined to accept alternative explanations. This is frustrating and frightening for all of us.

Instead, the government is trying to control and suppress the voice of the media and development organizations, which are critical toward government failings and anomalies.

Last year, the government tried to reinstate a provision of existing media law that would allow the government to shut down a newspaper if accused of sedition or hurting religious sentiments. It also drafted a broadcast media bill, which stipulates that military, civil and public information that could compromise state security and national interests must not be broadcast. Amid criticism, the government refrained from passing those laws, but they have not been removed completely from the government agenda.

Earlier in 2013, the government passed the Information and Communication Technology Act, which makes it illegal to publish any material over the Internet that would "deteriorate law and order," prejudice the image of the state or individual, or defame religion. It also allows police to make arrests without a warrant. This provision goes against constitutional rights of freedom of expression and it continues to haunt journalists, freethinkers and progressive people instead of actual criminals.

After the blogger killings, some top government officials rebuked bloggers for “crossing the limits” instead of punishing the attackers. This shows how apathetic the government can be.

Freedom of thought and expression come from God and is an individual's fundamental right, according to the United Nations.

In 2015, the government drafted a bill to regulate foreign-funded nongovernmental organizations, which is currently being reviewed by a parliamentary committee. If passed, NGOs receiving foreign donations would come under strict government control. This is an attempt to silence the voice of various NGOs and rights groups vocal against corruption and abuse of power.

Security forces are accused of carrying out mass arrests, abductions, tortures and extrajudicial killings, especially against members of opposition parties. A memorial now stands in front of the empty plot where Rana Plaza once stood in Savar, on the outskirts of the Bangladeshi capital Dhaka. (File photo by Stephan Uttom)

Owners oppress and deny workers their lawful rights, especially garment workers who are denied fair pay and treatment. Their abuses culminated in industrial disasters like the Rana Plaza collapse and the Tazreen factory fire, which left more than 1,200 workers dead and scores injured. The tragedies sparked massive public and media outcry, but little has changed for workers as they continue to face abuses including harassment and the withholding of pay.

Despite the signing of a peace accord in 1997, which ended a two-decade bloody bush war between a tribal militia group (Shanti Bahini) and government forces, peace is yet to return to the tracts, because the government is yet to implement most points of the treaty. The region is heavily militarized and sectarian violence is common. In most cases, indigenous people are victims of rights violations.

Despite some progress in education, employment and empowerment of women in Bangladesh over the past decade, many continue to face discrimination and violence at home, at the workplace — wherever they go. The male-dominant society still considers women subordinate, and denies them access to opportunities and rights.

Our legal system is discriminatory; powerful sections of society can easily influence and manipulate the legal process in their favor. Ordinary people don’t have enough clout to influence it. Tahera Begum, 28, seen with her father, jumped from the Tazreen factory fire and hurt her skull and backbone. She has yet to receive any compensation from the Tazreen owner or retailers sourcing clothes from the factory. (Photo by Rock Ronald Rozario)

In 1986, when I started working as a human rights activist, the few rights organizations in the country were pro-people and were trusted. Today, there are more than 100 human rights groups and almost all of them politically labeled. Their work is more centered on protecting the interests of the political group they endorse.

Government and communal apathy, lawlessness, a culture of impunity, a lack of justice, religious and political tensions and nepotism are behind the failing state of human rights in Bangladesh.

Moreover, people just don't get involved when the rights of others are violated. Unlike political issues, they don't line up in their thousands to protest rights abuses.

Unless there is a consensus for greater awareness and effective measures to protect people's rights, human rights will continue to deteriorate in Bangladesh.

Everyone has the right to live in peace with dignity and without fear. Sadly, this is not happening in Bangladesh.

People need to rise up for a greater, common good. Or, they will see that the worst is yet to come.