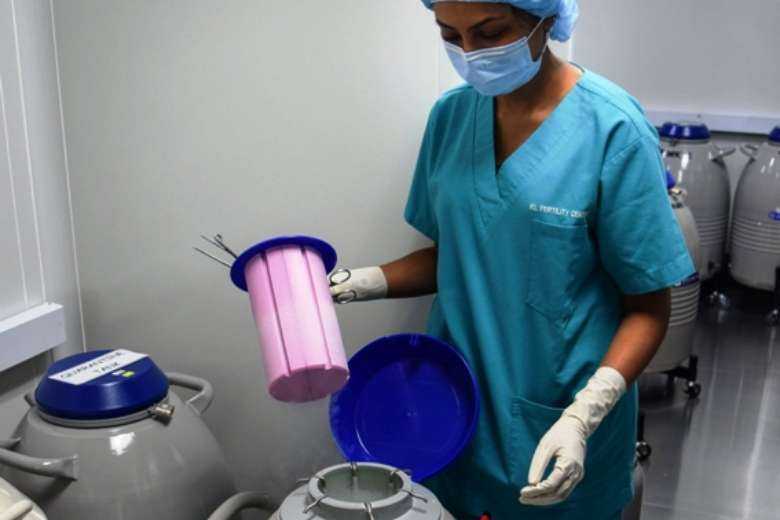 A staff member at the KL Fertility Centre displays an empty canister used to store women's frozen eggs in Kuala Lumpur, Malaysia, on May 11. (Photo: AFP)

In recent years, elective egg freezing by single women to preserve their fertility without medical reason — commonly referred to as social egg freezing — has gained much popularity worldwide. To date, this procedure is banned in only a handful of countries such as Singapore and China, where there is much ongoing debate to permit it.

The high costs of the procedure make it inaccessible to many younger single women with fewer savings, but with optimal egg quality for successful freezing. Hence some big corporations have stepped in to provide egg freezing benefits to their female employees — for example, tech giants such as Apple, Facebook and Google.

Nevertheless, corporate sponsorship of egg freezing may be a violation of good medical ethics, in particular with regards to patient autonomy. This is in fact a key foundational cornerstone of biomedical ethics and can be broadly defined as the right of patients to make key medical decisions involving themselves, in accordance with one's own values, reasons, and motives, without undue influence and coercive pressure from another person or organization.

This is of particular significance for elective medical procedures involving substantial risks to patients, such as social egg freezing. Although unnecessary for the sustenance of either life or health, patients are exposed to substantial risks during egg freezing. For example, besides invasive surgery for egg extraction, patients can also potentially develop ovarian hyperstimulation syndrome (OHS), a medical condition where the body overreacts to injected hormones, the severe form of which may be life-threatening.

It can be argued that company sponsorship of egg freezing is unethical because it interferes with the patient’s autonomous decision-making process to undergo elective egg freezing without a valid medical reason while incurring substantial risks to herself. This is completely unlike employee medical benefits for the treatment of life or health-threatening conditions, which is involuntary and not the result of personal choice.

In a recent post that was published on Women’s Forum Australia, it was stated that “by normalizing and incorporating the practice as an employee benefit into workplace culture, it is not unreasonable to expect that this could create a more subtle pressure on women to take up the offer.”

Added to such concerns is the fact that employers have a conflict of interest in delaying women from having children, as it keeps them in the workforce and is arguably more economically viable than other family-friendly work policies.”

Worryingly, there may be an unwritten rule that if egg freezing benefits are available, then female employees are expected to utilize them to delay childbearing, rather than take maternity leave; or else they will not be promoted or be the first to be laid off if the opportunity arises.

A company offering to sponsor elective egg freezing for their female employees is akin to enticing and abetting them to undergo this risky procedure without a valid medical reason, thereby exerting some degree of undue influence on their decision-making process.

Moreover, the act of sponsoring egg freezing may be tantamount to encouraging and abetting false hope of future motherhood with this elective procedure, due to its low success rates. The American Society of Reproductive Medicine (ASRM) reported that the pregnancy success rate is relatively low, at around two percent to 12 percent per frozen egg.

Similarly, the Human Fertilisation and Embryology Authority of the United Kingdom reported that only about one in five IVF treatment cycles were successful with a patient’s own frozen eggs. The uncertainty of future conception with social egg freezing may be further aggravated by the late age at which the majority of career women freeze their eggs, typically in their mid-thirties to early forties.

In future, if female employees are unable to conceive with their frozen eggs, could their employers be held accountable for encouraging and abetting them to freeze their eggs via company fringe benefits?

Indeed, as bioethics professor Heidi Mertes wrote: “Egg freezing is often misleadingly portrayed as an insurance policy instead of a last resort. Each frozen egg cell represents a small chance of a healthy live birth, and those chances decline fast after a woman’s 35th birthday. Rather than an insurance policy, women are instead buying lottery tickets. If they buy a lot of tickets (that is, if they are able to bank a large number of good quality egg cells), they have a reasonable chance of success, but uncertainty is a fundamental feature of the system. Facebook and Apple are therefore investing in a false sense of security. They are certain to get a return on that investment, but are their employees?”

Mertes also stated that company-sponsored egg freezing created a situation whereby women "owe" their employers. For example, a single woman who freezes her eggs at age 30 and bumps into Mr. Right the next day may want to embark on parenthood the year after. Will she be free from outside pressure to go ahead, or will the frozen eggs be regarded by both parties (employer and employee) as an addendum to the employment contract in which the employee has promised not to get pregnant in the first few years to follow? Also, what happens when she changes jobs?”

As such, company sponsorship of egg freezing should be viewed as a trespass on a patient’s autonomous decision-making process

Lawyer Lauren Geisser postulated that instead of refashioning the corporate norms of female employees sacrificing their youth and peak childbearing years for their employers, companies may find it in their best interest to offer egg freezing sponsorship at the expense of finding a long-term solution to sustaining long-term work-life balance and equality in the workplace.

Similar views were voiced by the journalist Nitasha Tiku, who wrote that women may feel pressured to use the egg freezing benefit to delay childbearing, “just like everyone feels pressured to always be on call to the office, always check email, always have a smartphone in hand.” If such coercive pressure exists, then this would be a clear violation of the patient’s autonomous decision-making process.

As such, company sponsorship of egg freezing should be viewed as a trespass on a patient’s autonomous decision-making process, thus contravening good medical ethics, and should therefore be strictly regulated or even prohibited by health authorities worldwide.

Dr. Alexis Heng Boon Chin is an associate professor of biomedical science at Peking University, China. He previously worked in the field of human clinical assisted reproduction research in Singapore and has authored 50 international journal publications on ethical and legal issues relating to new reproductive technologies in addition to publishing more than 250 scientific journal articles. The views in this article are those of the author and do not necessarily reflect the official editorial position of UCA News.