Volunteers at the Protestant Muen Church in Shanghai attend a seminar to study the revised regulations on religious affairs. (Photo courtesy of Gospel Times)

It is a matter of great concern that China's revised regulations on religious affairs violates the country's constitution and fails to protect religious freedom.

Before the regulations came into effect on Feb. 1, authorities asked religious organizations for their reactions to the revised rules, which were announced by Premier Li Keqiang last year.

Were there any voices of objection?

Authorities' close monitoring of reactions betrays their lack of confidence. The regulations not only violate the constitution but, more importantly, do not protect the rights of religious groups and individuals. In fact, they tighten controls on them.

For example, last Christmas, both on the internet and in society, remarks and behavior defaming and opposing the Catholic Church and Protestant Church caused great trouble for Christian religious groups and even opened fractures in society.

Their inaction proved that the regulations merely serve as a tool to tighten the state's grip on church groups or individuals without any meaningful protection.

The churches were demolished only about a month before the revised regulations came into effect, providing further proof that religious groups and individuals are not protected by rules that do little to prevent them from being attacked and persecuted.

However, the regulations are an effective tool for Chinese authorities to control the Catholic Church and to restrict religious groups and individuals. 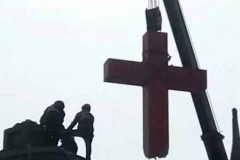 In chapter one about general provisions, article 1 stipulates that citizens have religion freedom but article 4 notes that "religion must not be used by any organizations or individuals to engage in any illegal activities that would endanger national security; disrupt public order; impair citizens' health; obstruct the education system; harm public interests, society and citizens' lawful rights."

By stipulating that organizations and individuals are not allowed to use religion to obstruct the education system, students' religion freedom is removed, excluding them from being classed as "citizens."

The rules allow schools to use the regulations and relevant education laws to deal with students who have religious beliefs and hold religious activities in schools, even asking students to reject theism and accept the atheism promoted by Chinese authorities.

This not only violates citizens' religious freedom but also infringes on their right to obtain a fair education.

Merely instilling students with atheism is no different from the Nazis' brain-washing education in Germany nearly a century ago.

The reason why Chinese authorities monitored reactions to the revised regulations after they were proposed is that they were afraid of facing rejections and protests once they were implemented.

The talks conducted by the State Administration of Religious Affairs were just to let religious groups and individuals know that it was necessary for them to accept the regulations.

Although President Xi Jinping repeatedly stresses the importance of rule of law, China's rulers appear to be looking after their own interests and implementing the law to suit influential people.

When the inconsistent regulations on religious affairs are taken as a basis for law enforcement, those victimized are ordinary people who have no power and influence.

However, the damage will ultimately be borne by the state alone.

Hai Ou is a Catholic in Hebei in northern China.