The eight worst countries in the world to be religious

US State Department report places four of the eight in Asia 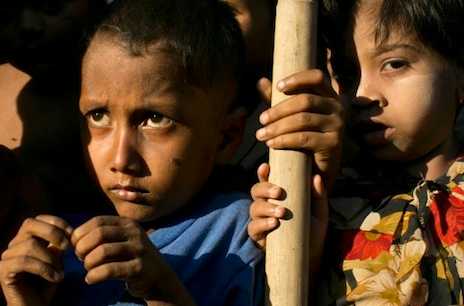 Rohingya children in Myanmar. The stateless Rohingya are ampng the world's most persecuted minority. Picture: CNN

Since 1999, the U.S. State Department has tracked the world's worst abusers of religious rights. As the most recent report notes, it has never lacked for material. Persecutions of people of faith are rising across the globe.

Among the most worrying trends, according to the State Department, are "authoritarian governments that restrict their citizens’ ability to practice their religion."

In typically bland bureaucratic language, the State Department calls these "countries of particular concern." But the designation can come with some teeth.

Sudan, for example, where a Christian woman was sentenced to death this week for leaving Islam, is ineligible for some types of foreign aid.

In addition to Sudan, here are the State Department's "countries of particular concern." You might call them "The Worst Places in the World to Be Religious."

Burma: The Burmese government puts a stranglehold on every religion except Theravada Buddhism, says the State Department.

Some government officials even enticed non-Buddhists to convert, and Muslims in the state of Rakhine, particularly Rohingya Muslims, are subject to discrimination and lethal violence, according to the State Department.

China: "The government harassed, detained, arrested, or sentenced to prison a number of religious adherents for activities reportedly related to their religious beliefs and practice," the State Department says.

That includes jailing Uyghur Muslims, one of whom was sentenced to 10 years in jail for "selling illegal religious material," and Catholic clergy who were arrested for not belonging to the state-run Catholic Patriotic Association.

That pales compared with the persecution of Tibetan Buddhists, according to the State Department, who suffered through "an intense official crackdowns at monasteries and nunneries resulting in the loss of life, arbitrary detentions, and torture."

Eritrea: Just four religious groups are officially allowed to openly practice their faith in this African nation; the rest are out of luck, subject to jailing or worse.

So if you're not an Eritrean Orthodox Christian, a Sunni Muslim, a Roman Catholic or an Evangelical Lutheran, life could be tough for you here. Harsh detentions for religious dissenters are the norm, according to the State Department.

Iran:  This Muslim-majority country's respect for religious rights has actually declined in recent years, according to the State Department.

"There were increased reports that the government charged religious and ethnic minorities with moharebeh (enmity against God), 'anti-Islamic propaganda,' or vague national security crimes for their religious activities," says the department's report.

Specifically, the government has imprisoned numerous members of the Baha'i faith and Saeed Abedini, an Iranian-American pastor who has been physically and psychologically abused, according to the State Department.

The authoritarian nation has jailed as many as 200,000 political prisoners, according to the State Department, many on religious grounds. The country discourages any religious activity not sanctioned by officially recognized groups.

Kenneth Bae, a Korean-American reportedly accused of spreading Christianity in North Korea, has sentenced in 2013 to 15 years of hard labor.

Saudi Arabia: The oil-rich monarchy doesn't even pretend to respect religious rights for any faith other than Islam.

Sunni Islam is the official religion, and the country's constitution is based on the Quran and the teachings of the Prophet Mohammed. The public practice of any other religion is prohibited, according to the State Department, and Arabian authorities beheaded a man in 2012 for engaging in "sorcery."

Sudan: This country has been on the State Department's naughty list since its inception in 1999.

Sudan penalizes blasphemy and conversion from Islam, sentencing a Christian woman to death this week. It has also arrested and deported Western Christians suspected of spreading their faith.

But in practice, the Central Asian nation maintains strict control of its majority-Muslim population, according to the State Department.

"The government continued to imprison individuals based on charges of extremism; raid religious and social gatherings of unregistered and registered religious communities; confiscate and destroy religious literature, including holy books; and discourage minors from practicing their faith," the department said in its 2012 report.

People jailed on charges of "religious extremism" have been beaten, tortured and even killed, according to the State Department.

Full Story: The 8 worst places in the world to be religious