The ecclesiology behind 'Amoris Laetitia' 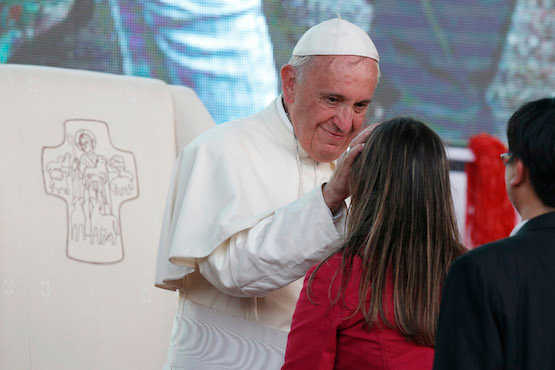 Pope Francis greets a young woman during a meeting with youths in Asuncion, Paraguay, in this July 12, 2015, CNS file photo. Pope Francis' postsynodal apostolic exhortation on the family, Amoris Laetitia was released April 8. The exhortation is the concluding document of the 2014 and 2015 synods of bishops on the family. (Photo by CNS)

Pope Francis’ apostolic exhortation on love in the family, Amoris Laetitia, is a landmark document in the history of modern papal teaching in how it approaches the hot-button issues of marriage and sexuality and, even more so, in its vision of the church.

It marks a further development in his ecclesiology; that is, his theology of the church.

First of all, the ecclesiology that underpins Amoris Laetitia is collegial and synodal.

And then he makes reference to 10 different documents issued from just as many bishops' conferences from around the world. This is all consistent with the 79-year-old pope’s already well-known ecclesiological method.

But what's new in this exhortation is the extensive use Francis makes of the documents that the Synod of Bishops produced at their assemblies in 2014 and 2015. He quotes from those texts 136 times. Previous popes also quoted synod documents. But those papers did not come from a "synodal process" such as the one Francis opened up with two distinct gatherings at the distance of 12 months apart, both distinguished by real freedom of debate.

Moreover, this pope’s ecclesiology is not limited to episcopal collegiality alone, but seeks to expand the notion of synodality beyond just the formal gathering of bishops in the synod proper. This entails a radical new understanding of the role of the Bishop of Rome, as he suggests in the opening lines of the exhortation:

"I would make it clear that not all discussions of doctrinal, moral or pastoral issues need to be settled by interventions of the magisterium.

"Unity of teaching and practice is certainly necessary in the church, but this does not preclude various ways of interpreting some aspects of that teaching or drawing certain consequences from it."

Francis quotes several times from Evangelii Gaudium in order to remind us that "time is greater than space." This is an invitation to take a close look at reality. In paragraph six he sets out to “examine the actual situation of families, in order to keep firmly grounded in reality.” (A.L. 3)

In paragraph seven he invites all of us to see ourselves in the weaknesses of families and says: “Everyone should feel challenged by Chapter Eight (Accompanying, Discerning and Integrating Weakness).”

The historical and existential ecclesiology of Francis is clear also in the key paragraphs 35-38 — the church cannot try to “impose rules by sheer authority” (35); it is a church that is “humble and realistic” (36); a church “called to form consciences, not to replace them” (37); a church that cannot be “defensive, wasting pastoral energy on denouncing a decadent world without being proactive in proposing ways of finding true happiness.” (38).

This is the ecclesiology of Vatican II, but also an ecclesiology humbled by the 50 years that have transpired since the council. It has been humbled by a radical change in the role of religion and the church in society, but also by the church’s own tragic mistakes, such as the sex abuse scandal, which is mentioned in Amoris Laetitia in the paragraph on the sexual exploitation of children:

"The sexual abuse of children is all the more scandalous when it occurs in places where they ought to be most safe, particularly in families, schools, communities and Christian institutions."

Third, the ecclesiology in Amoris Laetitia is inclusive and radically nonsectarian. It sees the church and society in constant dialogue and communication.

Pope Francis' experience in his native country is not normative but formative and leads him to build a very inclusive ecclesiology.

Francis invites families to be part of a larger society (par. 182) and to reject all forms of exclusion (par. 186). It is a church that integrates all people. The church is like a field hospital (an image he used first in the interview with the editor of Civilta Cattolica, Antonio Spadaro SJ, in September 2013) and “like the beacon of a lighthouse in a port or a torch carried among the people to enlighten those who have lost their way or who are in the midst of a storm” (par. 291). It is an ecclesiology of the parable of “the shepherd of the hundred, not just of the 99.” (par. 309)

Francis is blunt in pointing out the temptations of embracing an exclusive ecclesiology.

“There are two ways of thinking which recur throughout the church’s history: casting off and reinstating. The church's way, from the time of the Council of Jerusalem, has always been the way of Jesus, the way of mercy and reinstatement …” (par. 296).

The reference to the Council of Jerusalem, when the early Christian community chose to include gentiles who believed in Jesus Christ (Acts of the Apostles, chapter 15), is an implicit statement about the situation of the church today and about the need for a change of paradigm.

Besides all this, what is lacking is a direct ecclesiological appreciation of the ministerial dimension of married couples (families) in the church. This is something Francis would do well to further develop in his ecclesiology, based on a sacramentality that is deeply connected to an understanding of the human person that is very concrete and not idealized.

This pontificate has been a reality check for a church that, for quite some time, believed in a flawless, philosophical view of itself as well as of love and sexuality. A reality check is probably something to which real families are more accustomed than the clergy.

And so we see that Francis' view of the family reveals much about his view of the church.