The division on Christian divorce in Pakistan “The Catholic Bishops’ Conference of Pakistan isn’t satisfied about sanctioning Christian divorce directly through civil courts. Many priests are not happy about such separations. The faithful should turn to canon law. Our priority at parish level is to keep the serenity of the marriage bond. It is not our job to separate couples,” he told UCA News.

On Oct. 27, the parish priest of St. Thomas Church prepared proceedings of a divorce case for referral to Archbishop Benny Travas of Karachi, the lone canonist in the southern archdiocese.

“It’s the second case in two years in my parish. The divorce rate is higher among the English-speaking Goan community than in the Punjabi community. We also involve community elders for reconciliation between couples,” Father Arbaz said.

Christian personal laws are a thorny issue that has created a divide between human rights groups and the Catholic Church. Activists advocate amendments to the Christian Marriage Act of 1872 and Christian Divorce Act of 1869 which legalize marriages between 16-year-old boys and 13-year-old girls, thus conflicting with regional customs.

Two of Pakistan’s five provinces — Sindh and Punjab — have passed laws prohibiting child marriage, although Punjab allows girls to be married at 16, while Sindh has a minimum age of 18. Section 10 of the Christian Divorce Act allows husbands to prove adultery as the only reason for dissolution of a Christian marriage.

An inability to attain legal proof and documentation on marital and personal status provides difficulties for several religious minorities, especially their women

However, the Christian wife could petition for divorce if her husband changes religion, marries another woman, becomes guilty of incestuous adultery, or rape, sodomy or bestiality, or deserts without reasonable excuse, for two years or upwards. Furthermore, a non-Muslim marriage can be invalidated if one of the two parties converts to Islam.

Both government and church committees have been negotiating for decades to update the laws relating to Christian conjugal conflicts. In February, Human Rights Minister Shireen Mazari announced that the draft of a new bill to address laws governing marriage and divorce had been finalized.

The draft law was completed after 150 rounds of consultations conducted by the Ministry of Human Rights with various churches and Christian leaders. It has been with the Ministry of Law and Justice for more than two years. In July, the National Lobbying Delegation of minority activists urged government to submit it to parliament for consideration and adoption.

The absence of a cohesive, codified personal law system for minorities in Pakistan leaves members of these communities vulnerable and without adequate legal relief for many family and marriage-related matters, claims the Karachi-based Legal Aid Society. Debate on Christian divorce heats up in Pakistan 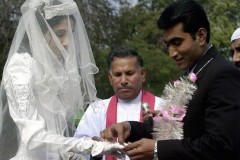 “There is also ambivalence regarding the divorce and dissolution laws, with many women from non-Muslim communities explaining how men from their community are afforded more rights through this colonial-era legislation than they are.

“Women must overcome all these legal and institutional disadvantages and obstacles to seek the legal recourse they need for domestic issues so that they can receive sufficient alimony to simply survive in an economy that does not value divorced women, much less divorced women from non-Muslim communities.”

On Oct. 26, Archbishop Joseph Arshad blessed the new Ecclesiastical Tribunal (for Nullity of Marriage Cases) in Islamabad-Rawalpindi Diocese. A team of five priests, three of them canonists, took oaths as the tribunal’s personnel.

“This is the first time we have had an office and a proper set-up in the diocese, which is celebrating its platinum jubilee. Many cases were delayed and people used other tactics, such as converting to Islam, creating a negative impression of the Church. Our aim is to save family life, which is a gift of God, and facilitate people,” said Father Kamran Younas, the tribunal’s notary.

“Christians should give priority to the laws of the Bible. Using them for personal benefits results in disaster. Even in cases of adultery, we prefer bringing them back to goodness. Our office is still a new concept. We plan to educate catechists and priests about how to file the petitions and get quick information.”

Marriage tribunals existed in six dioceses and the apostolic vicariate before the recent shortage of experts on canon law. Multan Diocese lost its last canonist in 2020.

Father Arbaz appreciated the initiative. “Such an office is still lacking in Karachi, the largest city of Pakistan. Archbishop Travas deals with such cases alone or delegates other priests. We prefer the term separation,” he said.

Peter Jacob, the Catholic director of the Centre for Social Justice, urged other dioceses to set up tribunals.

“It’s a welcome step and a good beginning. Competent people, including at least one lay competent lawyer, should be part of the tribunals to avoid unnecessary delays and complications in civil courts. It will also clear the road on reconciliation more than the ordinary courts can do,” he said.

“The draft law on Christian personal laws should have large ownership. It is a matter of justice and law above theological interpretations. Different interpretations can’t cultivate a consensus. It should be done in accordance with universal principles of justice.” Archbishop Joseph Arshad (center) with personnel of the Ecclesiastical Tribunal (for Nullity of Marriage Cases) in Islamabad-Rawalpindi Diocese. (Photo supplied)

RANJIT YAWU
GOAN COUPLES MAY BRING THIS UP IN THE UPCOMING SYNOD...Father Anthony Ibraz was prohibited from attending consultations on Christian marriage and divorce law in Karachi Archdiocese. “The Catholic Bishops’ Conference of Pakistan isn’t satisfied about sanctioning Christian divorce directly through civil courts. Many priests are not happy about such separations. The faithful should turn to canon law. Our priority at parish level is to keep the serenity of the marriage bond. It is not our job to separate couples,” he told UCA News.
Reply