The debate begins: in Argentina's dark days, whose side was Pope Francis on?

From The Telegraph, March 15 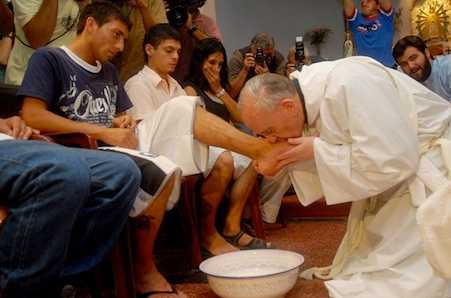 While he was seen as an archbishop of the people, who would eat alongside the poor in Buenos Aires’ biggest slum, accusations that he colluded in the human rights abuses of the 1976-1983 military junta taint his reputation.

In an article in 2006, Horacio Verbitsky, a prominent Argentine investigative journalist and one-time Leftist guerrilla, said of the new Pope: “Bergoglio is the most overwhelming and conflicting personality of the Argentine Church in decades, equally loved and detested.

“Depending on the source, he’s either the most generous and intelligent man who ever said Mass in the country or a Machiavellian felon who betrayed his brothers and had them disappeared and tortured by the military in the name of an insatiable ambition.”

The human rights group HIJOS, which represents children of the estimated 30,000 people kidnapped and murdered by the regime, yesterday renewed claims he was complicit in stealing victims’ babies and turned in priests, who were then tortured.

The longest-standing accusation is that in 1976, as a high-ranking official in Argentina’s Jesuit order, Pope Francis allowed two priests to be kidnapped.

Orlando Yorio and Francisco Jalics were taken to ESMA, an infamous Buenos Aires detention centre, where they remained for five months.

In his book The Silence, Verbitsky alleged that Yorio and Jalics refused to stop working in a Buenos Aires slum.

Subsequently, Pope Francis stopped protecting them from the military and paved the way for their capture. He has denied the allegations and no charges have ever been brought.

“Yorio and Jalics were kidnapped in a raid,” Pope Francis told his biographer, Sergio Rubin. “That same night I found out and I started to act. I didn’t throw them out of the church and I didn’t want them to be unprotected.”

Adolfo Pérez Ezquiel, the Nobel Peace Prize-winning human rights activist, who was detained by the dictatorship, said Pope Francis, like many clerics of the time, may not have spoken out but could not be accused of being complicit in its crimes. Others praised him for coming to the rescue of members of the Church who were being hunted by the regime.

“He helped the persecuted,” Toberto Musante, a Salesian who knew Pope Francis in the 1970s, told La Nación newspaper. “He took in church students when the dictatorship started threatening people and priests in [the northern] La Rioja province.”

Rubin also claims Pope Francis regularly hid people on church property and gave his identity papers to a man so he could escape across the border.

Alicia Oliveira, a former judge and secretary of Nestor Kirchner’s Human Rights Ministry, told Clarin newspaper that he was fully involved in the protection of those persecuted by the regime and had always attended the farewell suppers for those fleeing the country to escape it.

“After they fired me, Jorge sent me a marvellous bunch of roses to cheer me up,” she said.

Offering a different view of the Pope was Estela de la Cuadra, whose sister, Elena, was pregnant when she was kidnapped in 1977. The baby was born in captivity and given away to a family.

She claimed Pope Francis lied during a trial of military dictators when he said in a statement that he only found out that victims’ babies had been stolen after the dictatorship ended. Ms de la Cuadra claimed documents from 1979 showed he had knowledge of her sister’s case.

Original story: Pope Francis: saviour of the poor, or traitor who betrayed his fellow priests?