One reason for the silence may be a national environment influenced by feudalism, which also affects religious culture Silence is a blessing but some people consider it a weakness and some even call it dangerous. Some people are naturally silent and they are considered fools in Pakistani culture.

It is said that 16 years of Jesus’ life were very quiet; no one knows what Christ the Lord had been doing in those years.

It is very important to understand silence and its power, so let’s find out what it really means. There are different kinds of silence.

An irrelevant silence is one where you prefer to remain silent because the conversation or dialogue is meaningless.

In defensive silence, you quietly shut yourself off and force yourself to remain silent. This can be a serious mistake because emotions are not to be controlled but to be understood.

In weak silence, you consider yourself weak and think it is better to remain silent. You use silence as a weapon

This type of silence can lead to many dangerous diseases such as depression, headaches, heart problems, stomach ailments, etc. We must understand life and its challenges to make our life easier.

In weak silence, you consider yourself weak and think it is better to remain silent. You use silence as a weapon.

But then there are those who protest silently, using silence to express their feelings and emotions. It is called protest silence.

Finally, there is a kind of silence you adopt knowingly and try to convey a very important message through your silence. This is wise silence. Trends of priestly calling in Pakistan 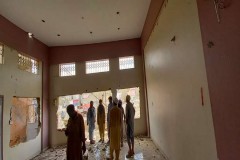 Such silence can be seen in Christ the Lord, the Blessed Virgin Mary and the Blessed Joseph.

Once there was a technical problem on a plane on which Nelson Mandela was flying. The others panicked but Mandela quietly read his newspaper. Later, when his friends asked if he was not afraid, Mandela said, “Of course I was afraid. But as a leader, you cannot let people know.”

A scared leader could have created a very frightening situation on the plane. Mandela was quietly trying to convey an important message. A message can be conveyed even in silence without uttering a word.

There is a dearth of good listeners in the world because we are not accustomed to silence. Jesus Christ took time out and spent time in silence, meditating and contemplating.

We all want to attain wisdom, peace and tranquility but that is not possible without silence. Until man learns to remain silent, he cannot live a meaningful life.

If you want peace, learn to keep quiet.

But in developing societies, especially Pakistan, a majority of people, especially in ecclesiastical circles, prefer silence to speech. Asking questions is considered disrespectful in Pakistani society.

To understand obedience, it is necessary to understand the life of Jesus Christ. He was very obedient to his heavenly Father but also talked and complained to him

One of the reasons for this may be the national environment in which Pakistani religious leaders and local church communities exist. The strong influence of feudalism on Pakistani society can be seen in our religious culture as well.

Under feudalism, speaking up or raising questions is considered disrespectful. Most leaders of the Pakistani Church come from poor families. Many priests and nuns come from villages and are familiar with the influence of local feudal chiefs.

So, when they become religious leaders, they start considering themselves as feudal chiefs. Their body language and speech are living proof of their feudal ways of thinking. This is doing great damage to the evangelical culture in Pakistan.

However, the Gospel culture promotes meaningful silence over meaningless silence. Obedience is a very important value of the Church. But it should not be blind obedience. Only a correct understanding of obedience can introduce us to Gospel culture.

To understand obedience, it is necessary to understand the life of Jesus Christ. He was very obedient to his heavenly Father but also talked and complained to him.

Christ on the cross said to his Father in Gethsemane: “Father, if it is possible, let this cup pass from me.”

Obedience does not teach silence. It encourages questioning. Is asking questions a part of obedience? The disciples of Christ Jesus were obedient but also raised questions.

If you obey your superiors to please them, then such behavior cannot be called obedience because it is flattery. The same can be said of obedience for the sake of personal or family interests, or to gain favors.

This silence is causing problems in the Pakistani Church.

Naeem Harry is a hospice chaplain in New Jersey in the United States. The views expressed in this article are those of the author and do not necessarily reflect the official editorial position of UCA News.