Islamic State seeks foothold in Asia, but measuring its reach is a slippery task 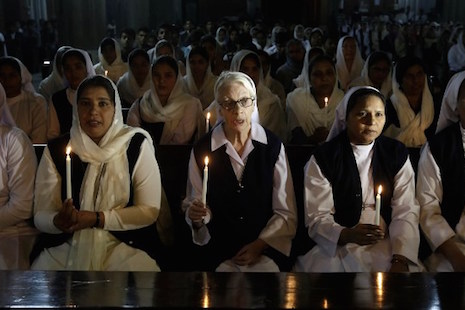 Pakistani Christians hold candles in tribute to victims of the Nov. 13 Paris attacks, at a church in Lahore on Nov. 16. (Photo by Arif Ali/AFP)

When the Islamic State group issued its latest aspirational map in August, there was an inherent warning for Asia. The militant group had not only captured large areas of Syria and Iraq and gained footholds across the Middle East and North Africa in just 18 months. By 2020, its jihadi fighters also planned to swallow the Indian subcontinent, wide stretches of the Philippines, Malaysia, and Indonesia, and march into western China.

In the days following the bloody chaos in Paris, the Islamic State group has shown that its violent designs on this region — home to nearly two-thirds of the world's Muslims — remain all too real.

Philippine security forces declared no-fly zones and blocked ships from entering port in Manila as world leaders, including Barack Obama, began talks at the Asia-Pacific Economic Cooperation Summit Nov. 18. In the hours after the Paris attacks, masked gunmen appeared in a new online video in front of the Islamic State flag, warning of an imminent attack.

"The dark days are coming to you … We will terrorize you even in your sleep. We will kill you and defeat you," it said.

In Kuala Lumpur, a Malaysian counterterrorism official announced on Nov. 16 that the threat of the Islamic State group was "real" as authorities spoke of a plot to kidnap senior Malaysian officials. 'Small but active' support for Islamic State in Indonesia: officials China calls for end to 'double standards' on global terrorism In the southern Philippines, where a patchwork of Islamic militants has been fighting the government for decades, at least six groups are considered to be aligned with the Islamic State, said Rommel Banlaoi, director of the Center for Intelligence and National Security Studies in Manila.

Malaysia has arrested more than 100 people with suspected connections to the Islamic State group, Minister of Home Affairs Ahmad Zahid Hamidi told the U.N. Security Council in May, when it was estimated 25,000 foreign fighters worldwide had joined the group.

In countries like Indonesia, there are fears the few hundred people who have flown to Iraq and Syria will come back radicalized. The Islamic State's key driver so far, however, has been existing militant groups that had been on the wane, said Sidney Jones, director of the Institute for Policy Analysis of Conflict in Jakarta.

"They have been given a new sense of purpose by the establishment of the 'caliphate' in June 2014," she told ucanews.com.

Those seeking to join jihad in Iraq and Syria must be approved by cells within Indonesia and then passed over to contacts on the Turkish border. Interest generated by watching propaganda on the Internet is typically the first step, said Jones.

"The [Islamic State] network is already in Indonesia. It is small but very active," he said.

There may be as many as 20,000 supporters in the country, including those who have returned from fighting in Afghanistan, said Ansyaad Mbai, former director of the Indonesian counterterrorism agency.

"This is very alarming," he told ucanews.com. In this Nov. 15 photo, Filipino activists light candles to express solidarity with the victims of the Nov. 13 terror attacks in Paris. (Photo by Clemente Bautista)

In most of mainland Southeast Asia, there are fewer signs to suggest militants may be making headway — Thailand declared itself "ISIS free" following the Paris attacks. But on the subcontinent, fears are growing the group may be on the brink of gaining a decisive foothold.

On Oct. 24, jihadists bombed a Shia festival in Dhaka, killing two and injuring dozens. Weeks earlier, unknown assailants gunned down an Italian aid worker and a Japanese man. The Islamic State group has taken credit for the killings.

The Bangladeshi government's response has followed the familiar tactic of blaming the opposition, including the hard-line Islamic party Jamaat-e-Islami. Relations with the ruling Awami League remain at an all-time low after recent fighting between the country's main political parties.

"In the absence of dialogue between the ruling and opposition parties, fundamentalists are trying to revive their activities," said Father Albert Thomas Rozario, a Supreme Court lawyer. "Paris is a wake-up call for dialogue to tackle the rise of Islamic fundamentalism, and put aside our differences."

In neighboring India, the risk is that going after the militants will upset a delicate religious balance, said former military commander Gagandeep Bakshi.

Prime Minister Narendra Modi has faced accusations of Hindu nationalism and targeting Muslims for decades. Critics, including Christians, say he has not done enough to protect everyone else outside of the Hindu majority that propelled him to power.

"The jihadi elements ought to be brought to justice but the government also needs to ensure that human rights are protected. This makes things difficult," said Bakshi.

India has fought a slow-burning war over Kashmir since independence, creating a base of disaffected young people. It's these people that are most likely to sign up, said a federal Home Ministry source in New Delhi, who spoke on condition of anonymity.

"Though it's a snail's pace, global jihad has been seeping into Indian society for several years, only its true face is emerging now," the source added.

Neighboring Pakistan and Afghanistan remain the key battlegrounds for hearts and minds — and land — in the fight against the Islamic State group, analysts say.

As the United States withdraws its troops from Afghanistan, fears remain that hard-line Islamists will fill the void, as was the case in Iraq. The Islamic State group has declared all-out war on the Taliban, the main hard-line Islamist contingent.

As a result, there's a complex web of interrelated, inter-warring jihadi groups in motion like never before. Many of these also operate across the border in Pakistan. Getting a true picture of where the Islamic State group fits remains difficult amid propaganda and a lack of information on the ground. Pakistan's top diplomatic official, Aizaz Chaudhry, told a recent press conference in Islamabad that the militant group has no presence in the country.

"Pakistan is capable of confronting any threat from the group," he said.

It was a claim full of bravado that appears inaccurate, said Imtiaz Gul, a security analyst and director of the Center for Research and Security Studies, an Islamabad think tank.

He called it a "sweeping statement," but added: "The [group] doesn't have an organized network in Pakistan."

Still, given its previous propensity for supporting Islamic militants in the past, and the porous nature of its borders, other countries remain wary of the threat posed by Pakistan — not least China.

Senior military figures from both countries coincidentally met on the same day as the Paris attacks to agree to yet further cooperation to secure the border with Xinjiang, China's largest region and home to 12 million minority Muslim Uighurs.

Beijing's claims that Uighurs were linked to international terrorism were largely derided in the past. But recent events mean that other countries are starting to listen — not least Thailand, which deported more than 100 Uighurs back to China in July. The following month, 20 people were blown apart when a bomb blamed on Uighurs detonated at the Erawan shrine in Bangkok.

The danger is that fighting the Islamic State group is going to lead to the persecution of entire minorities like the Uighurs, said Seyit Tumturk, vice-president of the World Uighur Congress, which represents the group in Turkey.

"They [Beijing] always try to link Uighurs to groups like al-Qaida and ISIS," he said. "But we always hope the Western world never believes communist China's claims."

Reporting by Siktus Harson in Jakarta, Joe Torres in Manila, Swati Deb in New Delhi, and ucanews.com reporters in Dhaka and Beijing.