The cop will decide your faith and fate in India

Anti-conversion laws, including the latest one in Karnataka, presume no person has the intellect to profess a faith other than Hinduism 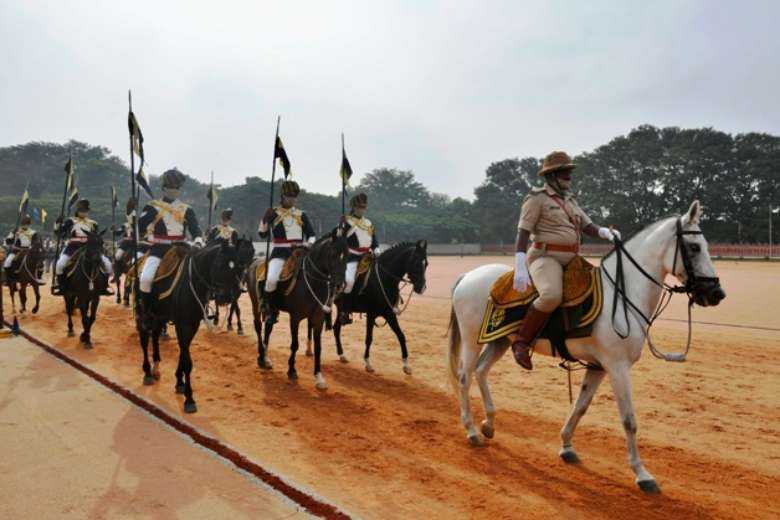 A mounted unit of the Karnataka police take part in a service parade at the State Reserve Police Grounds in Bangalore, India, on Oct. 29. (Photo: Manjunath Kiran/AFP)

In the Indian state of Karnataka, it is the neighborhood policeman who will decide if the faith of a new Christian is genuine or if there is something fishy about his conversion.

It is for him to report to the district magistrate if the person has been paid money, lured by a marriage trap or threatened with divine fury to agree to be baptized a Christian. The pastor could spend up to 10 years in jail, even more, if he has been indicted in several such cases.

In real life, local police often accompany hate mobs, look on as churches are attacked and, more often than not, take the pastor into custody.

As in other Indian states, conversion to Hinduism does not attract any penalties whatsoever as it is deemed to be the “original religion” of the land.

Rajasthan has a similar law but it has not yet been signed by the governor. In Tamil Nadu, then chief minister J. Jayalalitha passed such a law but faced public outrage and an electoral defeat before she withdrew the law.

In an arrogant snub to society and the Indian constitution, all these laws — inspired by the Hindu right wing cutting across political parties — style themselves as “freedom of religion acts.”

But it is the Rashtriya Swayamsewak Sangh and its daughter groups such as the Bajrang Dal who are most active, and its political face, the Bharatiya Janata Party (BJP) in power, that ensure the law gets weaponized.

The BJP rules the federal government in New Delhi and has control of 15 of the country’s 30 states, including Karnataka.

At their core, all such laws are similar. They presume that no person, much less if a woman, an indigenous Adivasi, or one who was once deemed in Hinduism to be an untouchable and now called a scheduled caste, has the intellect to profess a faith other than Hinduism unless someone else has offered an inducement by way of money, education, medicare or social change, or has been coerced by a show of force.

In recent years, with the rise in Islamophobia, and the fear that Muslims are increasing in numbers in the country, states have modified the law to all but outlaw interfaith marriages, also listing change of religion for marriage as a crime.

Scores of Muslim young men are in jail in Uttar Pradesh and other states for marrying Hindu women in what is called in mass media and political slogans as "love jihad."

Himachal Pradesh, then ruled by the Congress, was the first one to demand that a person and the clergyman give prior notice to the district magistrate before a change in religion. The high court struck down this requirement. The government later modified the wording.

The Supreme Court some decades ago upheld the basic premise of the law. It had also upheld Article 341 (3), which in fact is the most punitive law against conversion from Dalit communities who risk losing all political and economic reservations and affirmative action if they chose to profess Islam or Christianity.

But in recent years the Supreme Court has upheld an individual’s right to privacy, an omnibus right that covers the way of life and several other civil issues. The constitution guarantees freedom of faith, including the propagation of one’s religion.

The Supreme Court has not yet been asked to take a fresh look at all such anti-conversion laws in light of its ruling on the right to privacy. Senior constitutional and human rights lawyers such as Dr. Colin Gonsalves have said the laws, including that of Karnataka, can be successfully challenged in the Supreme Court, more so because they beget targeted hate and, in turn, violence against Christians and Muslims.

By the time 2021 ends, human rights activists say the number of violent attacks on Christians in the country may cross the 400 mark. It was variously recorded from 340 to 360 by the end of November. Catholic nuns, novices, clergy, itinerant small pastors, home churches and brick and mortar edifices have been attacked, congregations wounded. The police routinely arrest the Christian but ignore the attacker.

A major nationwide campaign against the Karnataka bill has been mounted by civil society activists, including the National Solidarity Forum, the All India Catholic Union, United Christian Forum and United Against Hate with Bangalore Archbishop Peter Machado as its visible leader.

Their major concern is the bill’s provisions to jail “those who indulge in mass conversion” for terms from three to 10 years, and a fine of 100,000 rupees (about US$1,330). A “mass conversion” could include just a husband and wife becoming Christian or Muslim.

Of churches and pastors, the warning is even more clear. Any institution or organization which violates the law will have its registration canceled

The bill says the "religious converter" shall give one month's prior notice to the district magistrate or an office designated by him. Marriages done for the sole purpose of unlawful conversion or vice versa will be declared void.

The mischief in this is clear as it empowers “any aggrieved person, his parents, brother, sister, or any other person, who is related to him by blood, marriage or adoption” to lodge a complaint with the police. The couple seem not to have any say in the matter.

The law also takes away agency from Dalits and Adivasis. "Whoever contravenes the provision of section 3 in respect of a minor, a woman or a person belonging to the scheduled caste or scheduled tribe shall be punished with imprisonment for a term, which shall not be less than three years, but which may extend to 10 years and shall be liable to fine, which shall be not less than 50,000 rupees," the bill says.

Notice for conversion must be given two months in advance. The district magistrate should conduct an inquiry through police "with regard to real intention, purpose and cause of the proposed religious conversion."

Of churches and pastors, the warning is even more clear. Any institution or organization which violates the law will have its registration canceled.

But targeted violence by politically empowered mobs is the immediate fear.

Aakar Patel, former head of Amnesty India, has a graphic description of how the Sangh mobs are formed. “An organized group often numbering in the hundreds intrudes and begins chanting bhajans — hymns — and slogans inside the church and prayer hall while the service is on. They shout accusations of ‘forcible conversion’ without defining what this is or any evidence that it is happening. They are often violent and assault those gathered for prayer. The mob prevents the worshippers from recording the violence, leaving little or no visual record of the offense. Often the result is that worshippers stop coming to the Mass, and perhaps that’s what is intended.”

Who, and how, will the empowered mob and its paymasters be held to account remains the question before civil society and the Church in India.