The “controversial” Anglican Catholics of Pakistan 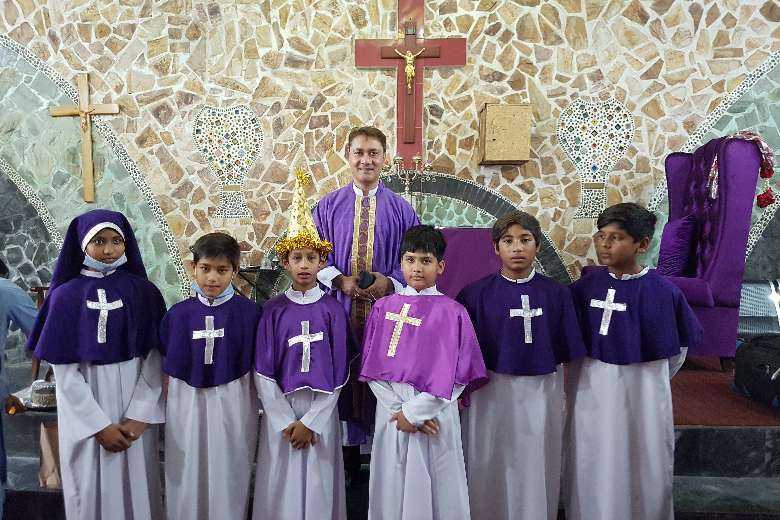 Every Sunday, Father Sajjad Anjum faces the altar for the communion rite while his wife sits gracefully in the section reserved for female parishioners.

The property, which sits on a 505 square meter block of land, includes a church, a school - in ruins - and a house formerly used as a catechist’s residence.

The 46-year-old Anjum is among 21 priests of the Anglican-Catholic Church in Pakistan, which a former Catholic priest of Lahore archdiocese started in the Muslim majority nation.

The Anglican Catholic Church, which began in the United States in 1977, is neither part of the Anglican communion or accepted by the Catholic Church. But its members claim their world-wide church continues both Anglican and Catholic traditions.

ACC Pakistan web claims that their church “accepts the teaching of the undivided Church of the first millennium which makes it Catholic. Its worship is rooted in traditional prayer and Holy Liturgy in the Church of England and its Book of Common Prayer.”

The ACC claims to have nine dioceses in neighboring India too.

But the ACC’s growth divides the Christian community in these nations, where Christians are a tiny minority and face harassment and violence at the hands of Hindu or Muslim radicals.

For example, Anjum, his St. Paul’s church, and most members of the community were once Catholics.

In 1972, local Christians funded the construction of St. Paul’s Church and Lahore Archdiocese managed the church and associated buildings 15 years ago.

Anjum and his group of people, who began to control the property, had a tussle with the archdiocese over its management.

“Ultimately we gave up on Roman Catholics. But remained almost identical in rituals including prayers for Pope Francis,” Anjum told UCA News explaining his reason to join the ACC.

Besides serving as the parish priest of St. Paul and a Vicar General of the ACC, he is also teaching science in a government school. His wife also teaches in a Catholic school.

The school, which was part of the disputed property remains closed since 2017.

“The school was a great source of education for more than 2,000 Christians of the 40 Quarters. Sadly, it’s gathering dust due to clashes with the Roman Catholics,” said Anjum.

The Pakistan government only recognizes five churches — the Catholic Church, Protestant Church of Pakistan, Presbyterian Church, Seventh Day Adventist and the Salvation Army. The others, that are not registered with Auqaf Department, are deemed illegal.

Father Francis Gulzar, Vicar General of Lahore Archdiocese rejected the ACC as “an attempt to corrupt the faithful. We can only pray for their enlightenment.”

“They are not Catholics. For us, they don’t exist,” he said.

Kamla Munir, a Catholic living in 40 Quarters, was estranged from the Lahore Archdiocese before the death of her husband, a former Member of the Punjab State Assembly, in 2019.

“We organized protest gatherings with Catholic priests and fought court cases to save their properties but the Church ignored us over a personal dispute. I also feel weird worshipping with a married priest. But at least they also worship God,” she said.

She said they are working with an NGO to revive the community school as a sewing or computer learning center. “Presently the building is simply being used to dump the household items of parishioners facing emergencies like a collapsed roof,” she said.

Bishop Irfan Jamil of the Church of Pakistan also denied any ties with ACC.

“Catholics should be more concerned about this group. They never reached out to us. We run a separate church in the same area,” he said.