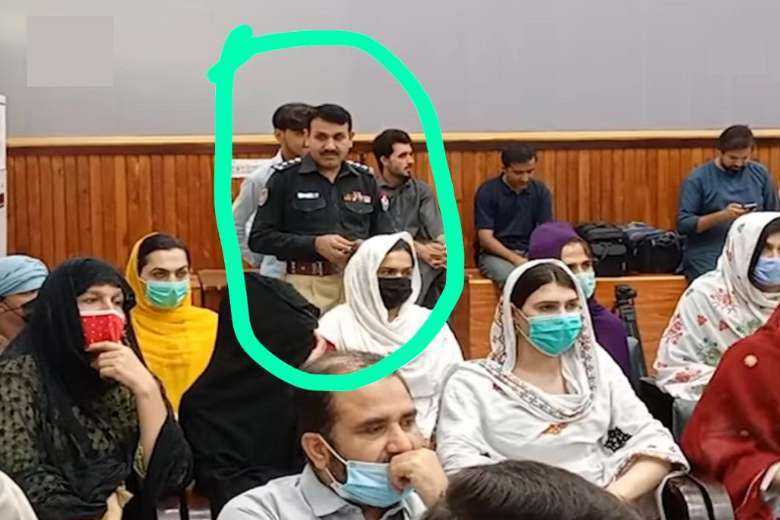 Farzana and her transgender “sisters” were holding a press conference when police raided the main hall of Peshawar Press Club.

Ihsan Shah, deputy superintendent of police, and his guard were stopped by the cabinet members of the club. “Stop this event. You don’t know me. I will see you,” he threatened the resisting journalists. The club governing body later boycotted all police ceremonies in Khyber Pakhtunkhwa (KP), the most conservative province in Pakistan.

Covering their faces in dupattas (long scarfs) and masks, Transgender Alliance KP later protested outside the press club on Oct. 12. More than 50 journalists demanded the resignation of Shah in a demonstration the next day.

“We reject this hooliganism and police terrorism. Terminate the raiders of the press club. The press club is an open platform. The suffocation and narrow approach is increasing in so-called democratic government,” they stated. Politicians and civil society, including Freedom Network, supported them.

“Freedom Network condemns a senior police officer’s naked violation of the sanctity of Peshawar Press Club and threatening to stop transgenders from addressing a press conference to voice concerns over local police indifference towards them. #journalismisnotacrime,” the group stated in a tweet.

Shah has been suspended but Transgender Alliance KP members continue to receive death threats. According to Farzana, the provincial president of the alliance, 80 transgender people have been murdered in the northern province since 2015.

“More than 100 have left Peshawar, the provincial capital, after receiving death threats. We have registered about 1,700 first information reports in different police stations but the culprits are released in less than two months,” Farzan told UCA News.

In January, Pakistan’s first transgender model, Rimal Ali, led a protest outside parliament in Islamabad after she accused Jahanzeb Khan of Attock in KP of shaving her eyebrows and hair and burning her with cigarettes.

Muslim transgender people complain of being insulted and mocked and stopped from entering mosques. They are questioned about Islamic practices and proclamations, they say. The number of transgender people recorded in Pakistan's census in 2017 was 10,418.

However, Farzana rejects the national data, arguing that 50,000 transgender people live in KP province alone. Last year the provincial Social Welfare Department proposed a draft policy securing a 2 percent quota for government jobs for the transgender community. It is awaiting approval from the law department. In 2019, the KP government designated separate wards for transgender persons in all public hospitals.

Father Nasir William, director of the commission for social communications in Islamabad-Rawalpindi Diocese, condemned the police raid on the press club.

“This is the first time a police team has raided the press club, desecrated its sanctity and held the organizers of press conference hostage. We condemn this attitude and demand our freedom of speech and to protest. Transgenders openly perform at functions organized in Punjab province but remain hidden in Peshawar,” said the priest who has served in Peshawar for more than three years.

Those born as shemales used to be respected, especially in villages. However, many have become gays to earn easy money

“I even held funerals for their community members and visited their houses. They feel uneasy praying with regular parishioners and continue living in secret societies. Those born as shemales used to be respected, especially in villages. However, many have become gays to earn easy money. The dual standard has complicated their issue,” he said.

Qamar Naseem, program coordinator of Blue Veins, a Peshawar-based NGO that advocates for women's rights and transgender empowerment, was in agreement.

“In most of the cases of violence against transgenders, the culprits are their intimate partners. They become jealous after the victim prefers a richer partner. Karachi, the most populous city, is top for such crimes,” he said.