Perhaps, thanks to Pope Francis, the surgery has begun with the recent Amazon synod The Catholic Bishops’ Conference of Japan invited me to be its representative in the journalists’ pool that accompanied Pope Francis on his Nov. 19-26 apostolic journey to Thailand and Japan.

It was a precious opportunity to encounter the heart of the Catholic Church in Asia: believers from Thailand with its various ethnic groups, from Vietnam, Cambodia and other countries of Southeast Asia, Chinese Catholics waving their red national flag, Koreans, Filipinos, Japanese and others. Since in their own countries they are usually religious minorities, and often oppressed minorities at that, the pope provided them with an excuse and an opportunity to know and show that they are part of the larger community of Christ’s disciples.

In fact, most of the world’s Catholics know little about the pope or what he does or says. He is a name in the Eucharistic Prayer but, without access to news of or instruction in his actual teaching, he is a semi-mythical figure. But he provides a symbol to identify with the larger community.

On the return flight from Tokyo to Rome, I realized how little the Vatican and its activities actually have to do with the Catholic Church. The pope and his retinue of cardinals, archbishops, bishops and priests to carry the briefcases are an entertaining sideshow, but the real Church was in the sparse crowds standing in the sun of Thailand or the rain of Japan along the routes to and from events or in the various stadiums where they could take part in a Eucharistic celebration led by the pope.

As I was en route, I read of a 16-year-old boy in the United States whose lungs had been destroyed by vaping. The lad needed a double lung transplant in order to survive. Thanks be to God, due to his youth and athleticism his prognosis is as good as can be expected.

The thought of a double lung transplant brought to mind the oft-repeated declaration by Pope St. John Paul II that the Church breathes with two lungs, the West and the East. “The Church must breathe with her two lungs!” (Ut Unum Sint, 54).

The West of which he spoke is the largely Catholic and Protestant part of Europe; the East is largely Orthodox. Together, they are the fading remnant of Christendom.

Together they are lungs that have absolutely failed. Replacement is as urgently needed as it was for that boy.

Granted, the two lungs have produced prodigies of theology, spirituality, liturgy, art, music, mission, pastoral care, service and even fashion over at least 1,500 years. But that was in the past. The lungs are now diseased beyond restoration.

The disease has two names: Holocaust and, as a shorthand for the various outrages of Soviet communism, Gulag. 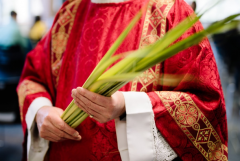 If after more than a millennium and a half of Christendom in East and West, horrors taking millions of lives were both thinkable and doable, obviously the lungs have failed.

Granted, the perpetrators were often, though not often enough, people who professed to not be Christians of either the East or the West, but their horrid actions were still conceivable and took place in the realms of Christendom and were supported by Christians. If the lungs had been inhaling the Holy Spirit, the exhalations after more than 1,500 years should have made such actions inconceivable to anyone.

After Auschwitz, after Magadan, neither the Western nor the Eastern lung can claim to be healthy or even viable.

A transplant is overdue. Perhaps, thanks to Pope Francis, the surgery has begun.

The recent Synod of Bishops for the Pan-Amazon Region, coincidentally or providentially focused on a part of the world often dubbed the lungs of the planet, may have marked the beginning of the replacement of the moribund lungs of Western and Eastern Christendom.

The synod initiated the development of a new style of church leadership, with direction provided not by Western precedent but by the lived reality of Christians in that part of the world. It was only a beginning but may show how the necessary transplant can begin and grow.

Recent popes — John Paul, Benedict and Francis — have spoken of Asia as the future of the Church. For John Paul and Benedict, that apparently meant new fields where Western Christianity could be transplanted as it withered in its homeland.

Francis seems open instead to looking to Asia and the southern hemisphere to see where new growth may be occurring among the Christians who look to Christ to guide them in faithfulness amid poverty, oppression, violence, discrimination and un-understanding — the sort of situation in which the old lungs first drew breath.

There is no need to look to the West or East, to either Rome or Constantinople (or Moscow), for models or approval. They do not offer the one and have no right to decide on the other. They can remind us of the larger body to which we all belong and can provide some examples of what must be done or must be shunned.

But their time has passed. They failed and can only look humbly to what Pope Francis calls “the periphery” to see where Christianity will draw breath and vigor for exhaling the breath of the Spirit on the world.

Father Bill Grimm is the publisher of ucanews and is based in Tokyo, Japan. The views and opinions expressed in this article are those of the author and do not necessarily reflect the official editorial position of ucanews.