After UN resolution, church leaders must insist on justice to promote reconciliation 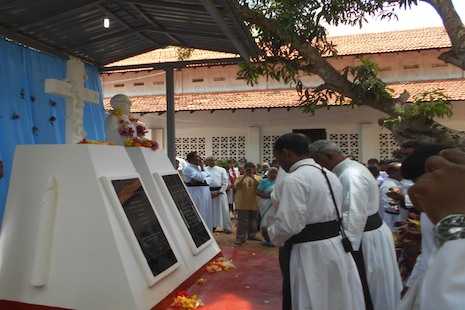 This May file photo shows Father Manuelpillai Sarathjeevan being honored. He died of a heart attack as he was accompanying Tamil refugees out of the conflict zone during the final days of Sri Lanka's civil war in 2009. (Photo by Quintus Colombage)

After four contentious resolutions on Sri Lanka, the U.N. Human Rights Council in Geneva on Oct. 1 adopted a "consensus resolution" for foreign judges and prosecutors to help Sri Lanka try those accused of serious crimes during the decades-long civil war.

This resolution came as a response to a report by the U.N. Office of the High Commissioner for Human Rights, which the previous Sri Lankan government had aggressively opposed — going to the extent of threatening, intimidating and arresting Sri Lankans who supported it, including my own detention.

There were many Sri Lankans — civil war survivors and their families and activists — both inside and outside the country who braved government threats to testify to the U.N. investigation team. Their stories in the U.N. report reveal a long list of unlawful killings, disappearances, arbitrary arrests, torture, sexual and gender-based violence, forcible recruitment of children, restricting fleeing war-affected areas, attacks on civilians and hospitals, food convoys, churches, etc.

The report says these are systemic crimes that may amount to crimes against humanity and war crimes if proven in a court of law that both the Sri Lankan government and the rebel Tamil Tigers are culpable. It emphasized that Sri Lankan laws and judiciary were incapable of dealing with such crimes and that human rights violations still continue in Sri Lanka. It recommended a "hybrid court" with international judges and lawyers working with Sri Lankans.

The resolution doesn't appear to have recognized the serious nature of the violations detailed in the U.N. human rights office's report. It has "balanced" its findings and recommendations to accommodate political and ideological considerations of the Sri Lankan government that co-sponsored the resolution.

An example of a glaring omission in the resolution is justice for those detained for up to 19 years under the draconian Prevention of Terrorism Act, without having their cases concluded.

A few days before the resolution, a local court declared a Tamil mother "not guilty" after being in detention for more than 15 years. There has been no apology or redress for her. Some detainees of the Prevention of Terrorism Act recently began a hunger strike calling on authorities to expedite their cases. But nothing has happened.

The investigation against me also still continues, restrictions on my freedom of expression are still in place and my confiscated equipment still not returned.

In my travels in Jaffna, Kilinochchi and Mullaitivu recently, I saw no signs of a reduction in military involvement in civilian affairs despite a commitment to this in the resolution. The military continues to run farms, shops, restaurants, resorts and preschools. When I was traveling from Jaffna to Allaipiddy to visit a church that was shelled in 2006, resulting in the deaths of many civilians, I was stopped at a checkpoint by a policeman and armed soldier who wanted to know where I was going and for what purpose.

There are no signs that things are changing on the ground, even after the U.N. resolution.

In principle, the transitional justice mechanisms proposed by the Sri Lankan government through the resolution are positive. But the devil will be in the details. Who will be appointed to run these proposed mechanisms? How will they be appointed? What will be their mandate and way of operating? Answers to these will be key to its success.

The government has stressed consultations with all parties — but there is nothing to indicate that insights and inputs will be taken into account, especially by victims and their families, the majority of whom are Tamils.

The commitment to pay serious attention to crimes by Tamil Tiger rebels is welcome, although there will be skepticism on this front too, given the obvious reluctance to try self-proclaimed Tamil Tiger leaders now in government ranks.

Hopeful signs include the recent convictions of soldiers for a massacre that happened 15 years ago, as well as a separate conviction for the rape and sexual abuse of two Tamil women five years ago. Military officials have also been arrested for the killing of Tamil parliamentarians and the abduction of a Sinhalese cartoonist. But these should be looked at in the context of thousands of similar cases, some detailed in the U.N. report, often with complicity at the highest level and whose perpetrators enjoy total impunity.

The government's several consultations with the military are of serious concern, since the military stands accused of some of the most serious crimes. The government's public statements try to appease the majority Sinhalese community by emphasizing the protection of the military, instead of trying to convince them of the importance of justice for the mostly Tamil survivors and victims. The government simply doesn't seem to have the political and moral vision and courage to take a principled position and do the right thing.

Media, civil society and religious leaders appear to be more focused on the international dimension of a judicial mechanism and paying less attention to mechanisms for missing persons, reparation, truth and reconciliation and other practical and important commitments that can make a difference to survivors and victims' families.

Church and religious leaders should help their communities face up to the stories of their brothers and sisters crying out through the report, and reflect about what we have done to each other. They should move away from silence and inaction, especially from defending war criminals as "war heroes" or "martyrs." They must insist that truth, justice and accountability are a must to guarantee reconciliation and non-recurrence of what Sri Lankans have suffered.