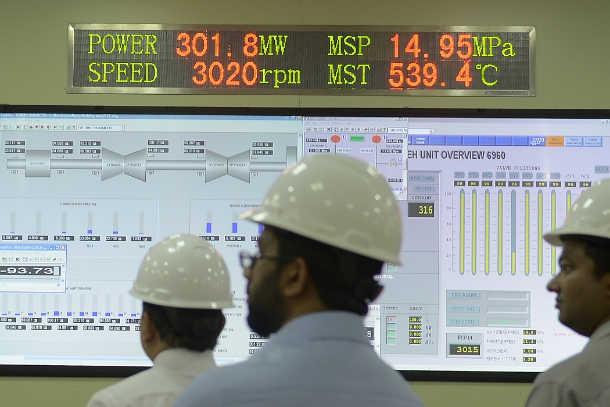 Men stand in the control room of Sri Lanka’s only coal-powered electricity generating plant in the northwestern town of Norochcholai in this file photo. (Photo by Lakruwan Wanniarachchi/AFP)

Sri Lanka was heavily dependent on hydro-electric power until the 1970s,  a time when the country's rulers even spoke of supplying electricity to India as well.

But with industrialization and an open economy initiated in 1977, Sri Lanka realized it could not rely on hydro-electric power alone to meet the needs of its people and industries.

What was proposed was the introduction of fossil fuel and having power through diesel power generation as a supplement which proved expensive with the fuel going up in price thanks to hikes initiated by OPEC nations.

Other alternatives were discussed in the 1990s with coal being favored as it was cheaper. Possible power plant sites proposed were in Hambantota, Trincomalee and Norochcholai. In 2000, it was agreed a plant would be built in Norochcholai.

The Catholic Church in Chilaw Diocese opposed it vehemently because it would affect the famous St. Anne’s Shrine at Talawila.

Environmental hazards were also raised concerning poor farmers and fishermen in the Kalpitiya peninsula, whose livelihoods would be affected.

Then in July 2000, President Chandrika Bandaranaike Kumaratunga abandoned plans for the Norochcholai power plant due to opposition from Catholics.

Credit for the anti-Norochcholai campaign went to just one prelate, Bishop Frank Marcus Fernando, as well as his clergy and flock.

Other prelates of the bishops’ conference had remained silent, saying it was a local problem.