The ashes of a police motorcycle lay buried in the rubble of a security post at a century-old shrine following a mob attack in Pakistan. Melted ceiling fans hung lifeless inside the charred ruins that once housed the grave of a Hindu mystic.

Police are occupying the compound after the Dec. 30 attack by the 1,000-strong mob at Teri, a hill settlement deep in Karak district of Khyber Pakhtunkhwa province. The crowd gathered after a local mosque made appeals to stop Hindus from extending the temple.

According to a police spokesman, the protesters had earlier called for a peaceful gathering.

“A house near the samadhi [mausoleum] was secretly bought by Hindus to extend the temple. Four people have been arrested. Others have been traced but it’s a difficult mountainous region,” he said.

“It was a small samadhi. The visitors from around the country faced challenges as locals objected to parking vehicles. The extended portion was for the lodgings of the pilgrims. The mob left after posting a jihadi flag on the demolished building,” he said on Dec. 31.

“Last week some miscreant clerics warned the shrine caretaker to organize prayers without hurting their religious sentiments. No worship was held yesterday that could hurt any feelings. The peaceful Hindus of Pakistan are suffering from the actions across the border [with India]. Both Islam and our constitution guarantee the safety of minorities. What are these teachings of Islam?”

Lal urged parliamentarians to reconstruct the shrine. “It is your responsibility. The government should take action as per blasphemy laws. This is tyranny. I request the majority to stand with us so that we can freely worship. Such extremists are dangerous for our country, which gets a bad reputation,” he said. 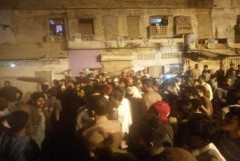 In 1997, the shrine was dismantled in a similar attack after a local cleric claimed to own the property. The Auqaf Department supervises important religious monuments and holy places in Pakistan. In 2015, the Supreme Court of Pakistan ordered the Khyber Pakhtunkhwa government to get the temple in Karak restored and reconstructed.

“Pakistani Hindu Council filed an appeal in the apex court after the cleric refused to leave the shrine despite receiving 375,000 rupees (US$2,338) as the cost of the land by a former Hindu member of the provincial assembly,” added Lal.

Hindus make up around 2.5 percent of Pakistan's 220 million population. More than 90 percent of Hindus live in Sindh province.

According to media reports, four Hindu temples have been vandalized in Pakistan since October.

Last month hundreds of people surrounded a Hindu neighborhood in Karachi and attacked the Sheetal temple at Lee Market in the city’s impoverished Lyari town. The mob also broke idols of Hindu gods and relics and defaced the temple following allegations of blasphemy against a member of the minority community.

Earlier this month, the US State Department designated Pakistan among “countries of particular concern” for severe violations of the International Religious Freedom Act.

Human Rights Minister Shireen Mazari announced the registration of a first information report about the shrine attack in a tweet.

“Strongly condemn the burning of a Hindu temple by a mob in Karak, Khyber Pakhtunkhwa. KP govt must ensure culprits brought to justice. MOHR also moving on this. We as a govt have a responsibility to ensure safety & security of all our citizens & their places of worship,” she stated.

Kamran Bangash, the special assistant to the chief minister on information, termed it an ugly act.

“The whole of Khyber Pakhtunkhwa was saddened over the attack on a Hindu temple as people believe in interfaith harmony. Extremist elements will be dealt with iron hands and will be brought to justice,” he said in a statement.

However, Khyber Pakhtunkhwa’s minister for labor and culture described it as a small incident.

“It’s an old dispute. At least three committees have been made and both parties had agreed to stop the extension, but the court orders changed the situation. But it was wrong,” Shaukat Ali Yousafzai said.

“It is hard to control a charged crowd. Now the dispute is being highlighted as a religious one. The villagers of Teri are willing to fix the building. Small incidents like these create big embarrassment for the country.”