The Buddhist monk who preaches apartheid 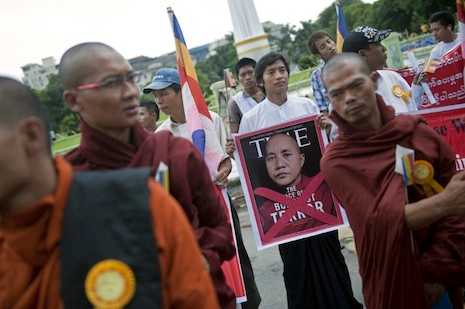 “Every Muslim should panic the moment they see Burmese or members of other ethnic groups,” said Ashin Wirathu, the virulently Buddhist radical monk, in a speech in Mandalay last week.

This is a typical sample of Wirathu’s rhetoric. Accused of fuelling the sectarian unrest that simmers constantly in the country, he and his anti-Muslim movement make frequent and often provocative calls for a social and economic boycott of Muslims.

His stance finds favor with many. In a gathering of more than 1,500 monks late last month in Yangon, several prominent monks declared support for the movement which they described as timely and necessary to prevent the growth of Islam in the country.

On that occasion, the monks also vowed to stage a campaign for a marriage bill to be passed into law, which would prevent non-Buddhist men from marrying Buddhist women. Last week, supporters of Wirathu set up tents on the streets of Mandalay, collecting signatures endorsing the bill.

“This bill is important to protect Buddhist women from having to convert to Islam against their desire if they get married to Muslims,” said Tin New Oo, one of the campaign organizers. “We wholeheartedly support Venerable Wirathu’s activities. Otherwise, Muslims will be dominating our country in the future.”

It was reported that members of National Democratic Force, a political party which splintered from the main opposition National League for Democracy, were involved in the campaign. But party leader Khin Maung Swe was eager to amend that.

“Some NDF members took part in the campaign, but I did not order it,” he said, while offering qualified support. “We don’t agree with the idea of preventing members of one religion from marrying into a different religion,” he said. “But I think a protective measure is necessary for Buddhist women.”

In a recent interview with Reuters, minister of religious affairs Sann Sint has denied allegations that the state covertly sponsors and approves of Wirathu's movement. He claimed instead that the monk’s sermons are about “promoting love and understanding between religions.”

But there are many Buddhists in Myanmar who are strongly against Wirathu and believe his activities have seriously tarnished the image of Buddhism.

“This anti-Muslim campaign has some militant aspects and is increasingly dividing our society,” said Than Than Nu, general secretary of the United Democratic Party. She also voiced a suspicion that Wirathu has friends in high places. “It is totally impossible to conduct these campaigns without strong backing from the authorities,” she said.

According to Kyaw Tun, a Yangon-based author on Buddhist philosophy, the sectarian violence in the country will continue, not just because the government is not doing enough to enforce the rule of law, but also because public figures and local media are not being sufficiently critical of the hate speeches which Wirathu and others continue to make.

“The politicians seem to be wary of the fact that if they criticize this movement, they will be in a confrontational position with the majority of the monks,” he said.

“The media has also deliberately failed to criticize it because it is fearful of offending the Buddhist public and damaging its own business. But I strongly denounce this campaign which has no ideological basis in Buddhism and is instead destroying the good reputation of  Buddhism in our country.”