The betrayal of Vietnam's forgotten Christians 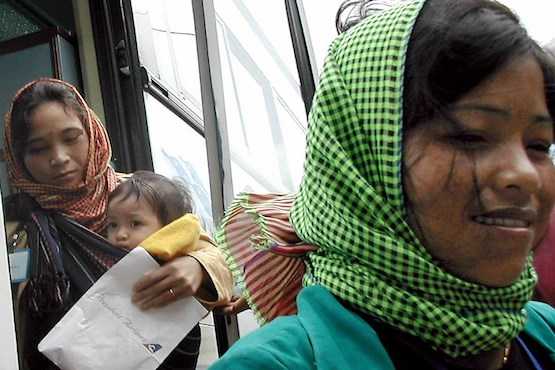 A file photo of a Vietnamese Montagnard family being moved to a United Nations safe house in Phnom Penh on July 26, 2004. The Cambodian government is currently reportedly threatening to return a group of Montagnards to Vietnam where they would face severe persecution. (Photo by Suy Se/AFP)

Exasperated after violent interrogations and round-the-clock intimidation at the hands of the Vietnamese government, Christian Montagnard Y-Man Eban escaped into the forests of eastern Cambodia on July 7, 2015.

"The reason I ran away from my country was because the Vietnamese police interrogated me four or five times and put me in jail for a week. They beat me a lot," Eban, 30, said from Dak Lak province.

When asked why he was arrested, Eban said it was because he sought "the freedom and independence for Dega people."

Eban was one of more than 300 Montagnard Christians, the indigenous peoples of the Vietnamese Central Highlands, also known as Dega, who three years ago started fleeing into Cambodia with tales of oppression at the hands of the Hanoi government. It was the first exodus in around a decade, when thousands fled amid crackdowns on protests in 2001 and 2004.

Persecuted for decades due to reasons including their support for America in the Vietnam War and their faith, there have been widespread accusations of human rights abuses and land grabs in the rolling hills of the Montagnards' homeland.

Virtually all have since been returned by the Cambodian authorities and just 20 have been granted refugee status. Eban said the persecution and surveillance back in the Central Highlands had continued unabated since he was sent back in October 2015 after being denied asylum.

"Since I came back to Vietnam, the authorities have viewed me as a criminal," Eban said.

He said he didn't feel secure back home and was anxious. Although Eban had not been physically abused, he said he had been verbally attacked. "They despise us, they hate us so much. I can see it in their eyes whenever they come to my house," he said.

Recent returnees to the Central Highlands have spoken of being subjected to renewed spying and intimidation, while others have been forced to give confessions on state television apologizing for fleeing while claiming they were sold false promises by the United Front for the Liberation of Oppressed Races (FULRO) — a Montagnard separatist group that laid down arms in 1992.

Eban said he had been regularly harassed by Vietnamese authorities, who also warned him to stay away from the defunct separatists.

"When I'm at home, they come to my house, asking me the reasons why I went to Cambodia," Eban said.

"When I go to work they call me on the phone and urge me to go back to meet with them — they say there is a government order," he said.

"Just a few days later they call me to met at a cafe but I do not respond to them. They've come to my home and interrogated me four or five times," he said.

He said they asked questions trying to implicate FULRO such as "who led the way?" and advised him not to "listen to the bad guys."

The situation for the vast majority of the remaining 36 Montagnards in Phnom Penh is also looking bleak.

A leaked email from a U.N. refugee agency (UNHCR) official in August said that 29 would be deported despite the agency arguing that they should "by all means, be recognized as refugees" and that a "valid alternative" had been offered to the Cambodian government to take them to a third country. All are currently in Phnom Penh.

The Interior Ministry could not be reached for comment and a UNHCR spokesperson said that there were no updates. But Sister Denise Coghlan, head of the Jesuit Service, which has been providing assistance to the Montagnards in Phnom Penh, has not yet given up hope.

"No new update, but feeling hopeful that the Cambodian government will allow UNHCR to transport them to a safe country for humanitarian reasons," said Sister Coghlan.

One of those, Y Rin Kpa, 47, spoke of his fear in messages sent from his police-guarded accommodation on the outskirts of Phnom Penh last week.

Kpa fled to Cambodia in 2015 over fears he would be arrested once more after serving a 10-year sentence for taking part in the anti-government demonstrations of 2001. He claims his daughter, who is currently in Vietnam, was recently "coerced" by Cambodian and Vietnamese officials into writing a letter to him in an attempt to persuade him to return.

"I'm afraid because the Vietnam government will continue to discriminate and they may arrest me and send me to prison again," Kpa said.

Family friends had informed him that their children had been turned away from local schools by Vietnamese teachers because they were recent returnees from Cambodia.

The Cambodian government has been accused of flouting its international obligations to refugees over the past three years for deporting Montagnards back to its more powerful neighbor. Vietnam has long been seen as wielding strong influence over Phnom Penh after it installed Prime Minister Hun Sen in the 1980s following the overthrow of the Khmer Rouge.

The UNHCR has also come in for criticism over its involvement in repatriating the Montagnards, due to its claims the asylum seekers were leaving Cambodia "voluntarily" — something strongly refuted by some of the Montagnards who claim they were told they would not be offered follow-up visits in Vietnam if they refused.

Despite criticizing the UNHCR in the past over its involvement in the returning of Montagnards, Phil Robertson, deputy Asia director of Human Rights Watch (HRW), said he believed the Cambodian government had "backstabbed" the agency.

The Interior Ministry had reneged on an agreement to allow the UNHCR to take asylum seekers that had clear and strong claims for refugee status upon appeal and resettle them in a third country, Robertson said.

"Cambodia's betrayal of its obligations under the U.N. Refugee Convention are matched only by its crass lies to a U.N. agency. Cambodia has made a total mockery of its claims that it will protect refugees, leaving its reputation in tatters," Robertson said.

"So, this is really make or break time for both Cambodia and the UNHCR," he added.

"Sending the 29 Montagnards back over UNHCR's objection would be the end of the road that indicates the Cambodia government doesn't give a damn about refugees."

In Phnom Penh, Kpa said he's still holding out for an eleventh-hour turnaround, but was mostly seeking solace in his faith.

"l regularly read the Bible and pray to God to bless us," he said.

Back in the Central Highlands, Eban had little doubt as to why the Cambodian government appeared so eager to prevent his people finding a safe haven from the wrath of Vietnamese authorities.

"They have a very strong relationship between the two countries," Eban said.

"As we all know, the Cambodian government is under the control of the Vietnamese government."

George Wright is a freelance journalist based in Phnom Penh.