The beginning of the end game

Thailand after the funeral of venerated 'people’s king' 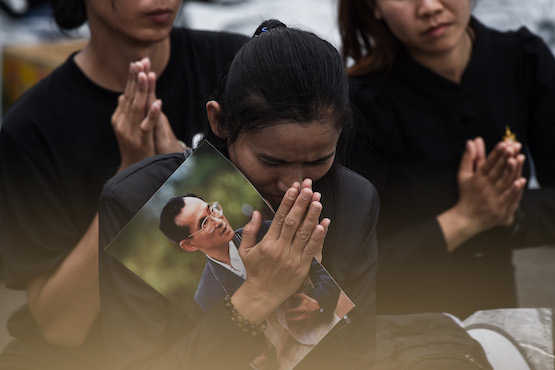 Mourners attend the funeral procession for the late Thai king Bhumibol Adulyadej in Bangkok on Oct. 26. (Photo by AFP)

By  ucanews.com reporters in Hong Kong

The late Thai monarch Bhumibol Adulyadej was cremated in Bangkok on Thursday in an elaborate funeral service fit not just for a king, but for the beloved father of a nation's people who consider him a demigod.

Hundreds of thousands of mourners dressed in black crowded Sanam Luang square as the 50-metre-high golden funeral pyre was ignited by his son and successor King Maha Vajiralongkorn Bodindradebayavarangkun.

The pyre, adorned with images from mythology and the life of the late king, represents Mount Meru, the centre of the Hindu and Buddhist universe where it is believed Thai royals return after death.

The ruling junta, which seized power in May 2014, set aside US$90 million for the five-day cremation ceremony, with major business shuttered and strict etiquette rules imposed for public participation. International dignitaries from scores of countries attended the service including royals from Bhutan, Japan, the United Kingdom, Sweden, the Netherlands, Belgium and Spain.

For many in this strongly Buddhist nation of 70 million people, King Bhumibol, who reigned for seven decades, is the only ruler they have ever known. A year of official mourning has passed since he died on Oct. 13, 2016 aged 88 in Bangkok's Siriraj Hospital after a long illness.

But the shadow King Bhumibol's reign has cast is a long one. The question now is how his son will shape the monarchy and whether he will try and maintain the legitimacy and authority King Bhumibol so assiduously built.

That King Bhumibol’s eventual passing and the succession issue underpinned virtually all of Thailand’s politics in recent years is no secret to the country’s political observers.

He was admitted to Siriraj Hospital in September 2009 and released almost four years later in August 2013. The official reason given by the palace was "respiratory problems" but it was widely believed he had suffered a debilitating stroke during that period or shortly afterwards. Concerns amongst the elites over the prince's fitness for ascending the throne due to "personal behavior" were also long-standing.

"Everything has been about the king (Bhumibol) dying and what will come next," one editor said. "Everything has been in the context of that eventuality and what plans will be in place to ensure the continuation of interests that have flourished over the past 70 years."

King Bhumibol was an astute builder of alliances with the military, religious leaders and Bangkok elites. Projecting the image of a humble "people’s king" he re-established the monarchy’s authority and aura, becoming arbiter in coups and times of political chaos. The king, after all, was above politics.

But after Thailand emerged from years of authoritarianism and re-invented itself as a middle-ranking country in the early 1990s, a domineering political figure in the form of telecoms billionaire Thaksin Shinawatra emerged. He first won government in 2001 and in a landslide four years later, creating a real threat to the established nexus of power.

Thaksin, who oversaw strong economic growth in Thailand, whether as a result of his policies or the booming regional economy, was changing the rules of the game.

He was ousted in a military coup in 2006 and forced into exile, but his proxy, populist parties were still unbeatable at the polls, winning favor with disenfranchised rural voters in the north and northeast.

But even more worrying for the establishment was the perceived cozy relationship developing between then Prince Vajiralongkorn and Thaksin. Prince Vajiralongkorn, who has been married three times and spent long periods of time overseas, was unpopular with the public. He also had a strained relationship with Privy Council president Prem Tinsulanonda, who served as prime minister in the 1980s and is regarded by many as the true power behind the throne.

The possible long-term scenario was unthinkable to sections of the military and the Bangkok elite; Vajiralongkorn on the throne and Thaksin in power.

After the 2014 coup, Prime Minister Gen. Prayut Chan-o-cha vowed that the military "would not waste the opportunity" as they did when Thaksin was ousted in 2006.

Critics were silenced, conveniently under the country’s Draconian lese majeste laws which make criticism of the monarchy a jail-able offence, and, Thaksin's political machinery was carefully dismantled. A not-so-subtle push back to conservative values in religion, culture and education was also embarked on.

But the junta's choice of which royal successor to support was a trickier issue. Would it be the popular Maha Chakri Sirindhorn — the sexagenarian, childless, 'Angel Princess' – or the aloof and unlikeable Prince Vajiralongkorn who had fathered an acceptable heir?

In August 2015, Prince Vajiralongkorn organized the mass-participation Bike for Mom cycling event in Bangkok to mark the 83rd birthday of his mother Queen Sirikit. The event, which was broadcast on national TV and received saturation media coverage, was interpreted as healing a rift between the pair as Queen Sirikit was a clear supporter of the anti-Thaksin "yellow shirt" movement. It also marked the beginning of the rehabilitation of the prince's image as a credible, caring, public-spirited leader.

The choice had been made.

So what next for King Vajiralongkorn who in a month will officially ascend the throne?

During the year of public mourning he has remained low-profile, ostensibly out of respect for his father's passing and the genuine sorrow felt by the nation. His 65th birthday in July passed with barely any fanfare.

But in those 12 months King Vajiralongkorn has been quietly making major changes little reported in the complacent, if not fearful, local press.

He has demanded constitutional changes, reshuffled the royal household and appointed a new Buddhist supreme patriarch from a fraternity close to the monarchy, rather than the candidate recommended by the religious council.

Prem Tinsulanonda, now 97, remains as head of the powerful Privy Council, but half the other members are new with increased representation of the King’s Guard.

"His majesty has proven himself to be very adept at managing the junta and the military,” academic Paul Chambers at the Institute of Southeast Asian Affairs in Chiang Mai said in February.

In July, the Crown Property Act was amended so that "management and making benefits" of royal properties are subject to "the king's will" and managed by his personal appointees.

Earlier this month he became a major shareholder in the Siam Commercial Bank (SCB) following the transfer of shares held by the Crown Property Bureau (CPB) valued at about $500 million, Nikkei Asian Review reported.

The CPB manages assets owned by the Thai crown, including prime real estate and shareholdings in major listed companies such as SCB and Siam Cement Group (SCG).

According to a report posted by the Securities and Exchange Commission the CPB's stake in SCB was reduced to 18.14% from 21.47% as of Oct. 2.

In a separate report filed with the SEC by the Crown Property Bureau, it was stated that the 3.33% holding had been transferred to King Vajiralongkorn, but there was no indication as to whether there was any payment for the stake.

After reneging on his promise for a return to democracy several times, Gen. Prayut recently vowed that general elections will go ahead in November 2018.

A junta-instigated rewriting of the country’s constitution has strongly stacked the odds against political parties winning power in their own right, and ensured the military has control over the choice of the next prime minister.

Many analysts believe that after King Vajiralongkorn is sworn in, pressure will increase on the military to expedite a return to democracy. Thaksin’s proxy party, Pheu Thai, is cynical about a vote going ahead. But the country’s other major political party, the conservative Bangkok-based Democrats, is hopeful it is a step in the right direction in returning to democracy.

The public has remained largely subdued over the past year due to the official mourning period which has bought the junta extra time.

"Prayuth wants to delay the election but he knows that after the king’s cremation, there will be pressure for an election," said Kan Yuenyong of the Siam Intelligence Unit think-tank.

"This announcement for the election in November next year will act to reduce that pressure, because if not, there could be chances for protests," he told Reuters.

For King Vajiralongkorn urging a swift return to democracy could be in his and the country’s best interests.

He has shown he is willing to use his royal authority to stake his ground. How effectively he uses his authority for the betterment of the country as well will prove crucial to Thailand's future.