Pope Francis takes part in an ecumenical meeting at the World Council of Churches (WCC) in Geneva, on June 21, 2018. (Photo: AFP)

In St. John’s Gospel (ch.17), Jesus prays that his disciples may all be united in mission. Unfortunately, the history of the Church has not borne him out.

In 1054, the Christian Church split into two — the Roman Catholic Church under the pope, and the Orthodox Churches under various Patriarchs.

Later, in 16th-century Europe, the Catholic Church was further divided into various ‘Reformed’ or Protestant churches.

In addition, there are various ‘Pentecostal’ or revivalist groups, each claiming to be guided directly by the Spirit (whence ‘pentecostal’). Today they are the fastest-growing segment of Christians.

Sadly, each of these traditions has been antagonistic to each other, a counter-witness to church mission everywhere.

However, in 1908, Father Paul Wattson, an Episcopalian priest in the U.S.A.,  with Mother Lurana White, founded the Society of the Atonement and introduced a Prayer Octave for Christian Unity.

Reverend Wattson strongly believed that Jesus’ atonement for mankind’s sins demanded unity — or “at-one-ment” — from his followers. In other words, Christians should be re-united as Christ wished. The first Church Unity Octave took place on Jan. 18-25, 1908.

In 1936, a pioneer of ecumenism in French Catholicism, Abbé Paul Couturier, brought in a new interpretation of the Unity Octave.

Couturier perceived that the idea of "return" made it difficult for many Christians to join with Catholics in prayer.

So he began what he called the "Universal Week of Prayer for Christian Unity," keeping the same dates of Jan. 18-25, but urging people to pray for the unity of the Church "as Christ wills it."

Today, the Church prays for the unity, the full communion, of all the baptized, in a way and at a time that the Lord, through the work of the Holy Spirit, will arrange.

In recent times, it was Pope John XXlll who gave a major push to Church unity at the beginning of Vatican II. It was he who introduced the word “ecumenical” into Catholic vocabulary, meaning by this, a communion of Christian churches united by baptism and the Eucharist, in discipleship with Christ.

The Vatican Council also introduced us to ecumenical dialogue, that is, to speak to and to listen to those others belonging to the vast Christian oikumene (universe).

The way is long and arduous, for the churches have to overcome the prejudices of the past and the many historical wrongs which each group inflicted on the other.

Our challenge in Asia, however, is slightly different. It is inter-faith dialogue: reaching out to appreciate the world religions, and understanding their different ways of approaching God and society.

In India, for example, much has been done by way of understanding and adapting to Hinduism, Islam and even tribal religions, but the rise of fundamentalism everywhere threatens these precarious relations.

In fact, dialogue with Islam has become more urgent than ever. This is because so many Muslims identify the West with a Christendom which exists only in their fantasy, and also because so many Western Christians will not ask forgiveness for their exploitation of Muslim societies in the past.

But there remains yet another area of dialogue, “dialogue with the world.”

This is the saeculum — secular values and beliefs which have become a whole system of values for our contemporaries, independently of religion.

"To engage in dialogue with secularism means confronting the social evils of caste, communalism, gender discrimination and violence"

Like the great religions, secularism too has positive and negative aspects. To be ‘of this world’ is to live rationally, to embrace the scientific spirit and its technological outreach, to overcome prejudice based on gender, caste and race.  All these are positive.

But there is a darker side to the saeculum:  its godlessness and hubris; its practice of injustice, oppression, violence and hatred; its lust for financial power and contempt for the deprivation of millions across the globe.

To engage in dialogue with secularism means confronting the social evils of caste, communalism, gender discrimination and violence, the displacement of peoples, consumerism and ecological crime.

Such dialogue cannot be the work of a single uniform community, but a larger “communion of communities” which may be religiously, ethnically and linguistically diverse, but is united and focused in seeking an equitable and peaceful society.

Take gender issues for example, we need to see how from time immemorial all societies have discriminated against women, kept them poor and dependent, and have practiced violence against their bodies, and all in the name of God and family honor.

And finally, is there yet another dialogue called for today?  There is. It is the dialogue — or reconciliation if you will — with Mother Earth and all creation.

When the World Council of Churches prayed for “peace, justice and the integrity of creation,” it is this which was in mind. And in Laudato si', Pope Francis decries humanity’s ‘sinful’ treatment of Mother Earth, and of those who dwell upon it.

Earth’s multiple crises — air pollution, climate change, water scarcity, acid rain, biodiversity loss, inequality, continuing poverty, disease and alienation (a “deep and melancholic dissatisfaction”) — are stated with clarity in Pope Francis’ exposition, but most of us are too caught up with the short-term benefits of our industrial civilization to pay much heed.

Pope Paul VI used to say, “Dialogue is the new way of being Church”.

No longer must Christians go out “to conquer the world for Christ” as it used to be said, but rather go out to listen — to other Christians, to men and women of faith and goodwill everywhere, to the cries of the Earth itself as seen in climate change — and to learn from all creation how to establish new relationships. 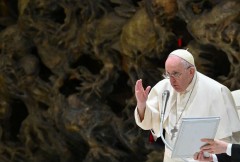