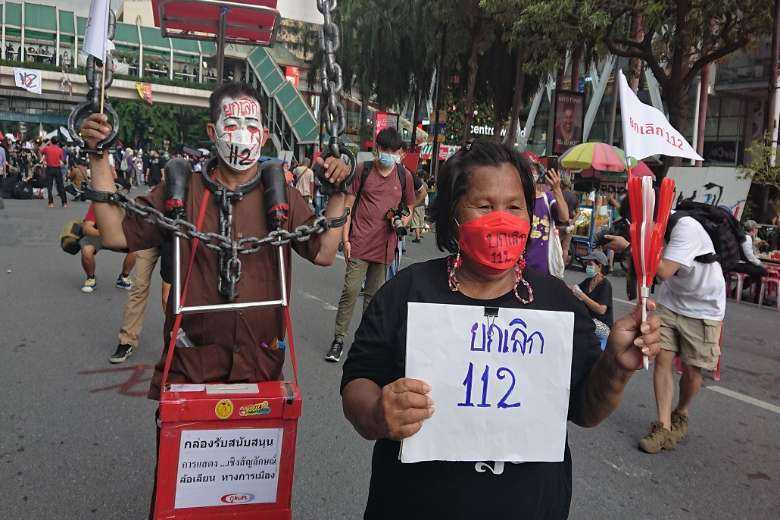 Two protesters demand that Article 112 of the Thai Criminal Code, also known as the lese majeste law, be abolished during a street protest in Bangkok on Oct. 31. (Photo: UCA News)

Thousands of Thais gathered at a major intersection in central Bangkok on the afternoon of Oct. 31 to demand “free speech for all” by calling for the abolition of the country’s controversial lese majeste law.

In a street fair-like atmosphere of the kind that has become a trademark of mass demonstrations in the Buddhist-majority nation, groups of protesters engaged in live performance art, busking and speeches from an impromptu stage amplified through loudspeakers.

Despite the easy-going festive atmosphere, however, the message of the protesters to Thai authorities was serious: abolish Article 112 of the Criminal Code, also known as the lese majeste law.

The law prescribes up to 15 years in prison for making critical comments about the monarchy or members of the royal family.

Although technically it covers only the king, queen and heir apparent, routinely it is broadly applied by the country’s courts to shield all royals, including past ones, from any criticism.

We are not allowed to say what we think because Thailand is not a free country. Basically, Article 112 is like a blasphemy law

Even calling for a reform of the monarchy or abolition of Article 112 can be deemed by the authorities to be in violation of the law.

“We are not allowed to say what we think because Thailand is not a free country,” a Bangkok-based university student, who is a Catholic, told UCA News at the protest.

“Basically, Article 112 is like a blasphemy law,” she added, explaining that citizens have been charged with lese majeste even for innocuous criticisms of the royal family or jokes about the monarchy.

During speeches delivered at the rally, student protesters called for several leaders of the student-led pro-democracy movement to be released from prison where they are being kept on lese majeste and other criminal charges pending their trials.

The demonstrators also collected signatures asking the government to abolish Article 112 with numerous people appending their signatures to the petition.

In one symbolic gesture, protest leader Panusaya Sithijirawattanakul, a university student turned prominent democracy activist, cut herself on the arm while calling for all political prisoners held on lese majeste charges to be released.

Panusaya, who has herself been charged with several counts of lese majeste for comments at earlier street rallies, was imprisoned earlier this year but has since been out on bail.

In all, some 150 predominantly young Thais, including several children, have been charged with lese majeste over the past year by the government of Prime Minister Prayut Chan-o-cha, a former army chief who seized power in a coup in 2014.

“This is an illegitimate government and we will never accept it,” a young protester told UCA News.

Prayut’s government has also been widely faulted for mismanaging Thailand’s Covid-19 crisis, which has caused economic hardships for millions of Thais

The determination of young Thais to continue calling for sweeping political reforms despite frequently violent police crackdowns on street rallies and numerous criminal charges having been filed against a large number of protesters appears to have stumped the country’s authorities.

Many of the young protesters come from middle-class backgrounds in Bangkok, a social milieu that was until recently seen as a key pillar of support to royalist and often anti-democratic political movements.

However, during more than seven years in power the country’s military-allied regime has been mired in a series of controversies, including persistent allegations of graft.

Prayut’s government has also been widely faulted for mismanaging Thailand’s Covid-19 crisis, which has caused economic hardships for millions of Thais, including middle-class families in Bangkok.