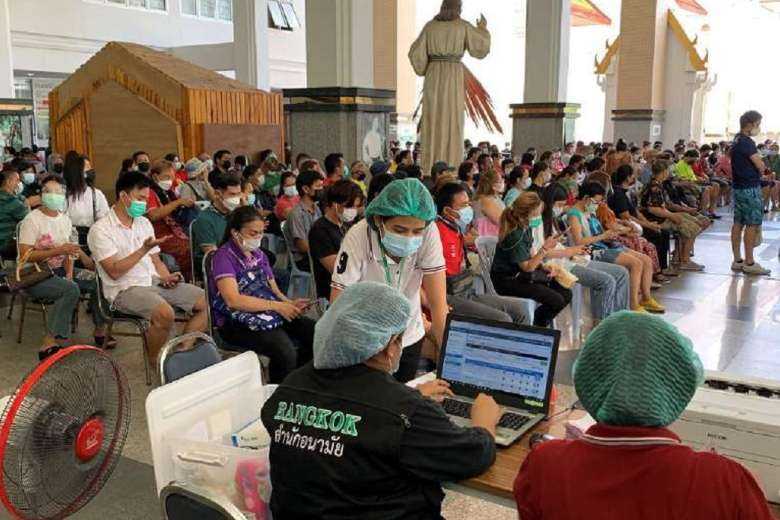 People wait to receive doses of the Sinovac vaccine at Holy Redeemer Church in Bangkok on May 30. Millions of Thais are forced to keep on waiting for jabs as Covid-19 continues to take its toll. (Photo: AFP)

Barely a week into it, Thailand’s mass Covid-19 vaccination program has hit a roadblock as a shortage of doses has left numerous elderly Thais and people with underlining conditions in the lurch.

Several hospitals in Bangkok canceled appointments indefinitely on June 14 for prospective recipients of vaccines, saying they had not received the adequate number of doses from the Health Ministry.

Health Minister Anutin Charnvirakul in turn blamed Bangkok’s municipal officials for the fiasco, saying that the ministry had already supplied half of the promised 1 million doses in the first batch of vaccines to the Bangkok Metropolitan Administration (BMA).

“So it cannot be said that they haven’t received the vaccine from the ministry, and saying so only shows a lack of responsibility,” Anutin said.

“The BMA’s health and medical departments should have tried their very best in managing the given vaccine supplies as they now have full control of everything there.”

Regardless of who is to blame, millions of Thais are forced to keep on waiting for jabs as Covid-19 continues to take its toll around the country.

Just when we thought this [vaccination drive] would finally get going, it’s turning into a mess

To date, nearly 200,000 Thais have been infected with the potentially deadly disease, the vast majority of them in the past few months.

The hardest-hit places include inner-city slums in Bangkok as well as prisons around the country with thousands of inmates having tested positive in overcrowded and unsanitary cells.

So far only 2 percent of the country’s 69 million people have received vaccines and continued shortages are threatening to derail the Thai government’s plan to vaccine half of the population within two to three months after several months of delays.

“Just when we thought this [vaccination drive] would finally get going, it’s turning into a mess,” Suchada, a small business owner in northern Bangkok who asked that only her first name be used, told UCA News.

“I am very concerned about my parents because they are elderly and have underlining health conditions.”

As millions of Thais continue waiting for vaccines, the economy continues to suffer, forcing millions of people to while away their time without any income.

Thailand’s crucial tourism industry has been moribund for more than a year, having left millions of locals without jobs.

The vital export sector, which accounts for 45 percent of GDP, is also facing increased challenges as some 130 factories have had outbreaks of Covid-19 among their workers, including those that produce goods for international brands.

“If [the outbreak among workers] continues, the damage will increase, so factories have to be fully vaccinated,” Kriengkrai Thiennukul, chairman of the Federation of Thai Industries, told Reuters news agency.

However, a chronic shortage of vaccines means that millions of Thais, especially those already economically disadvantaged, may have to wait for several more months before they can get their jabs.

“We keep on waiting [for jabs] every day, and that’s all we can do — wait,” Suchada said.