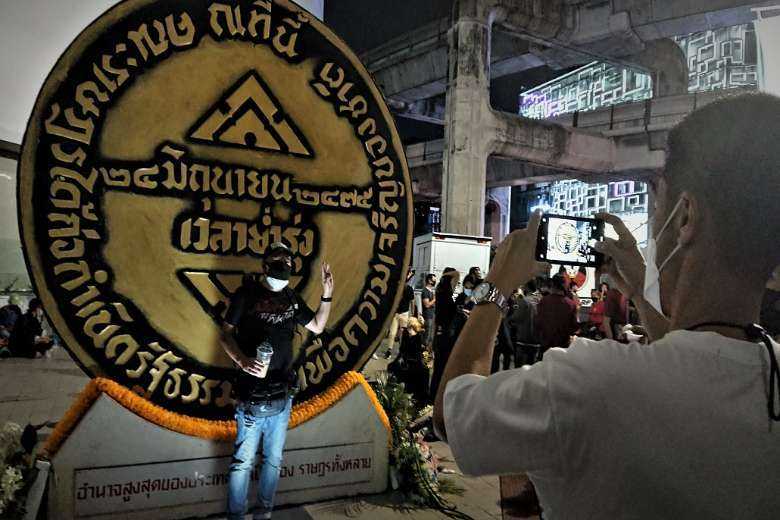 A protester stands in front of an installation bearing an emblem in memory of the uprising in 1932 that overthrew the absolute monarchy in Thailand (Photo: UCA News)

Thousands of young Thais defied a Covid-19 emergency decree that prohibits large gatherings and took to the streets of Bangkok to resume calling on the military-allied government to return democracy to the people.

After a hiatus of several weeks in street protests as a third wave of the coronavirus had largely emptied Bangkok’s streets, young pro-democracy demonstrators showed up en masse on June 24, converging on three strategic sites around the capital including Democracy Monument and Parliament House.

“Why do we have to love the monarchy? We are free to love anything we want,” a young woman shouted through a loudspeaker to cheers from the crowd at one protest site.

Student protesters, who have staged numerous street rallies for a year, have openly criticized Thailand’s monarchy, breaking a long-standing taboo as the royal institution is officially portrayed as worthy only of reverence as a key pillar of the nation.

In response, authorities have charged more than 80 pro-democracy activists, including numerous college students and several minors still in high school, with royal defamation, a crime punishable with up to 15 years in prison per count.

The revolution of 1932 has remained unfinished to this day. After all these days, we still don’t have democracy in Thailand

Poignantly, the protest yesterday took place on the 89th anniversary of a popular uprising that overthrew absolute monarchy in Thailand in 1932.

“The revolution of 1932 has remained unfinished to this day,” a protester in his early 20s told a UCA News reporter.

“After all these days, we still don’t have democracy in Thailand,” he added, before posing for a photo at a large portable installation showing an emblem in memory of the uprising in 1932.

Although Thailand is officially a constitutional monarchy, many young protesters have been calling for new constitutional limits on the influence and privileges of the royal family, whose members they accuse of wielding too great an influence in Thai life and politics.

The demonstrators also demanded that a new, more democratic constitution be drawn up to replace the current constitution, which was passed after a group of generals with Prime Minister Prayut Chan-o-cha, then the army’s chief, ousted an elected civilian government in 2014.

“A constitution must come from the people, not from a small group of people who seize power,” a Catholic university student told UCA News.

The vehemence and dogged determination with which young Thais have taken to the streets regularly over the past year to demand democratic reforms appear to have surprised the government.

Despite lodging numerous criminal charges against protest leaders such as sedition and detaining several of them in prison without bail, Prayut’s administration has not managed to quell brewing discontent among a large section of young Thais who want to see him and his entire government gone.

In the past riot police have repeatedly used violent crowd-dispersal methods, including shooting tear gas at peacefully demonstrating students, but the latest mass demonstration passed without any major incidents.