Anti-democratic forces, although vastly outnumbered, have all the power in the Southeast Asian country 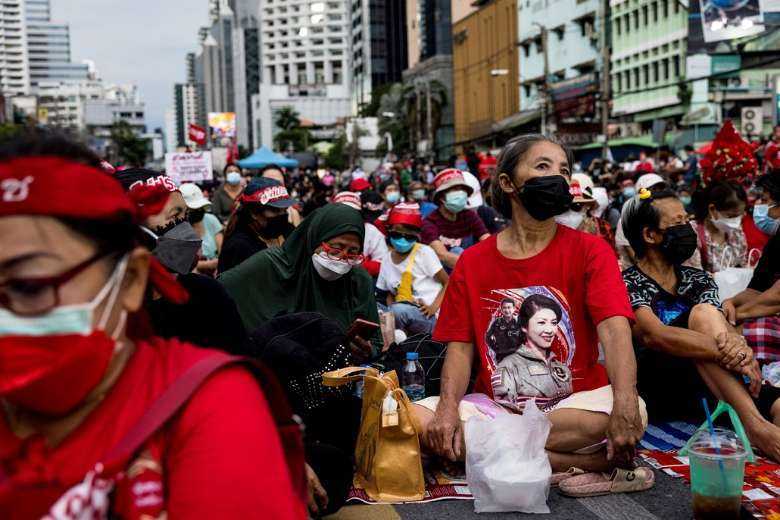 A Thai protester wears a T-shirt featuring former prime ministers Thaksin and Yingluck Shinawatra during a demonstration in Bangkok on Sept. 2 calling for the resignation of Prime Minister Prayut Chan-o-cha over the government's handling of the Covid-19 crisis. (Photo: AFP)

A call by a former prime minister of Thailand on his fellow citizens to have faith in the country’s democratic system has been met with ridicule among young Thais who have been demanding democratic reforms. And rightly so.

In a speech late last week, Chuan Leekpai, 83, who served as prime minister twice in the 1990s, urged the citizens of his nation, which has been ruled by a military-allied government since 2014, to “have confidence in the democratic system.”

“Don’t let problems and obstacles destroy the country’s main system. We must not lose heart,” Chuan, a conservative politician who is currently president of parliament, said in an address on Thailand’s Constitution Day on Dec. 10.

“The mandate belongs to all Thais who play a crucial role in promoting a democratic system free of corruption,” Chuan said.

That may sound like a fine sentiment except that Chuan was an odd fellow to express it.

“Tell that to the military, courts and your PDRC-supporting friends and their earlier incarnations,” one commenter aptly noted, referring to the People’s Democratic Reform Committee, a rightist anti-democratic movement that staged raucous street protests in 2014 against a democratically elected government, precipitating a coup by the military the same year.

The PDRC was supported by Chuan’s own Democrat Party, which despite its name is a conservative party with a history of anti-democratic tendencies. Back in 2014, seething from losing a series of elections to Thaksin Shinawatra — a billionaire turned politician — and his proxy parties, the Democrat Party allied itself with the PDRC, which was itself led by a one-time secretary-general of the Democrat Party, Suthep Thaugsuban.

The movement’s stated aim, encapsulated in its slogan “Reform before elections,” was to kneecap the government of Yingluck Shinawatra, Thaksin’s sister, through civil disobedience during rowdy street protests while calling on the military to step in and “restore order.” A junta led by Prayut Chan-o-cha, the army’s then chief who remains prime minister, then staged a coup in May that year before proceeding to tear up the constitution and roll back basic freedoms.

“The military dictatorship rammed through the current anti-democratic constitution by making it illegal to campaign against it,” one commenter pointed out apropos Chuan’s speech on Constitution Day. “Unelected Senate appointments by the military. Courts routinely disband any reform-minded party. What ‘democracy’ is he talking about?”

In the wake of the widespread ridicule occasioned by Chuan’s comments, numerous democratically minded young Thais have taken to social media to point out that since the overthrow of absolute monarchy in 1932, Thailand has been a democracy in name only for most of its history. Since 1932, there have been 18 coups and as many constitutions in the Southeast Asian nation where the country has been run by a succession of generals, tycoons and influential political powerbrokers.

Others have noted that the current rulers of Thailand, a powerful group of army generals and business tycoons, have created a deeply undemocratic system, which makes it virtually impossible for liberal parties to gain power through elections.

One brand-new progressive party, which garnered more than 6 million votes in an election held in 2019 in a result that shocked the military and its allies, was disbanded by the courts early last year over a legal technicality. Disbanding popular parties has been a tried-and-tested method of undermining democracy in Thailand over the past two decades.

“How can 6 million disenfranchised voters have trust in the ‘democratic system’? Sorry, but we are effectively ruled by the military and their partners, who have no interest in democracy because it would spell the end of their monopoly over Thailand,” one commenter rightly observed.

During the military’s latest tenure since 2014, the prospects of democratic governance, once fairly robust in Thailand, have dimmed. Prayut’s government is deeply unpopular over its heavy-handed suppression of criticisms and mishandling of Thailand’s Covid-19 pandemic, which has seen nearly 2.2 million infections in a nation of 69 million and brought the country’s tourism-dependent economy to its knees.

Since June last year, tens of thousands of young Thais have been taking to the streets of Bangkok calling on Prayut to resign and for democratic governance to be restored

The military-led government has also failed to tackle endemic corruption, which it promised to do, even as the divide between rich and poor has widened further still in one of the world’s most economically unequal countries. Yet it holds on to power through the might of security forces and their conservative allies.

Since June last year, tens of thousands of young Thais have been taking to the streets of Bangkok calling on Prayut to resign and for democratic governance to be restored. In response, the authorities have charged hundreds of them, including key protest leaders, with various crimes from sedition to royal defamation, a vaguely worded law that prescribes 15 years in prison per charge in Thailand.

And so it goes.

The same day that Chuan uttered his remarks, a group of democracy activists gathered outside a cultural center in central Bangkok discussing the flaws of the latest military-drafted constitution and calling for a new one. From the perimeters of their gathering, police officers watched the proceedings.

The young demonstrators made plenty of sense in decrying the current state of affairs in Thailand, yet one had to wonder whether they have any chance of succeeding in their aim of unseating Prayut’s government. Even if they did, it remains in doubt that the country’s next government would be much better because anti-democratic forces, although vastly outnumbered, have all the power in today’s Thailand.

ALAN RAYMOND
When I despair about the situation in Thailand, I also think there has never been a time such as this when so many people have started upon the journey to gain real democracy. It won't come easy, they know that. " Each time a man stands up for an ideal or acts to improve the lot of others, or strikes out against injustice, he sends forth a tiny ripple of hope, and crossing each other from a million different centres of energy and daring those ripples build a current that can sweep down the mightiest walls of oppression and resistance" Robert F Kennedy.
Reply