Founded in 2007 by Father Oleg Cherepanin, its main churches have opened doors to tourists and those affected by conflict 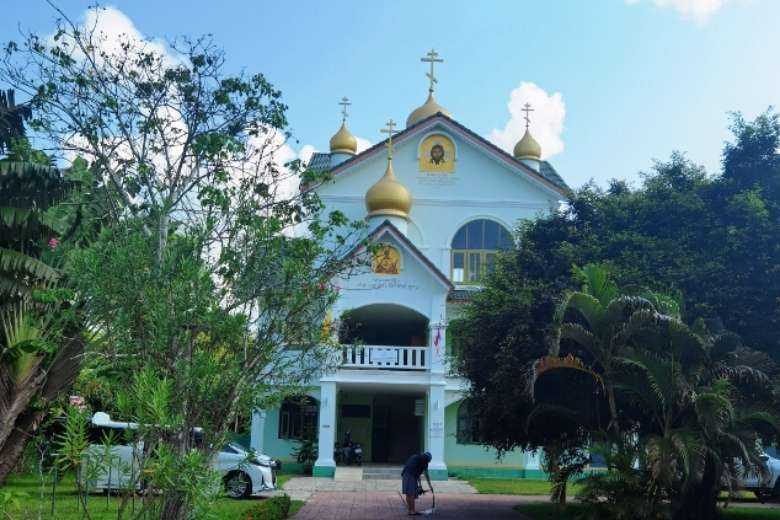 Holy Trinity Orthodox Church, on the northern side of Phuket island, is a beautiful building with apple-green walls topped with three golden domes that local Thais call "the mosque."

Since the beginning of the conflict in Ukraine, Archimandrite Oleg Cherepanin, head of the Orthodox Church in Thailand, has opened the doors of his places of worship to Ukrainian families affected by the conflict, as well as to Russian tourists.

"We don't differentiate between our parishioners," says Father Oleg. "In Phuket, Ukrainians and Russians are one big Orthodox community."

Behind the church, rooms and offices accommodate several Ukrainian families, originally from Kiev and Kharkiv, whose homes disappeared in bombings. "Without an apartment, without work, with the war raging, we prefer not to return for the moment," explains a mother of two. "Here, at least, the children are safe."

In the next room is Nikita, a Russian tourist from Irkutsk: "My return ticket was canceled overnight," he says. "But the airline didn't refund my money, and I don't have enough money to buy a new ticket. At first, I thought the embassy would help me, but they advised me to turn to the church instead."

European sanctions on several Russian banks, disconnected from the international payment system, have made the situation even worse for some Russian tourists, unable to pay for their hotel rooms or basic needs.

The two priests, Russian and Ukrainian, sing and celebrate together. The faithful, mostly Russians but also Ukrainians, Kazakhs and Uzbeks, pray for their loved ones, their families and for the end of the war

Nikita, who has been staying here for the past month, has been doing minor electrical and gardening work around the church and does not miss any of the daily religious celebrations.

A Ukrainian priest, Father Roman from the Diocese of Kiev, is also being hosted by the church while waiting for the situation to improve: "I hope to be able to return to my parishioners as soon as possible; they need hope.

One Sunday, about 50 people are present at the church. The two priests, Russian and Ukrainian, sing and celebrate together. The faithful, mostly Russians but also Ukrainians, Kazakhs and Uzbeks, pray for their loved ones, their families and for the end of the war.

Towards the middle of the liturgy, an anonymous request by a faithful suggests praying "for the health of Vladimir Putin."

"We do it, of course," Father Oleg justifies himself, "we are religious, we pray for the health of all.”

The bias in the community is to avoid discussing the war that is raging: "It's too painful, there's no point in discussing it, it risks dividing the community," he says. "As believers, we should help, not debate."

Collections of money and non-perishable goods are made and sent every week to Ukraine on behalf of the Russian community in Phuket, via the network of personal contacts of parishioners.

The Orthodox Church in Thailand is relatively new, founded in 2007 by Father Oleg Cherepanin. It already has five main churches, in Bangkok, Phuket, Koh Phangan and Pattaya, to meet the growing needs of the large Russian community in the country.

"It is hard to understand how this is possible. My assistant is Ukrainian, I have many Ukrainian friends here. We are like brothers and sisters. Many Russians have roots in Ukraine"

All the churches also have annex buildings where clergy, volunteers or choir members — an important part of the Orthodox liturgy — reside, often coming from Russia or Ukraine.

All the churches were built in the last 15 years, entirely thanks to donations from the community's faithful.

After the Sunday liturgy, a small group gathers for lunch in Father Oleg's apartments. During this period of Lent (Orthodox Christians celebrated Easter Sunday on April 24), there was no meat, mostly vegetarian soups and pastries.

The parishioners discuss the life of the community, the education of the children, and the affairs of each other. The war is only mentioned reluctantly: "It is hard to understand how this is possible," says Janna Sviritoka, director of a real estate agency. "My assistant is Ukrainian, I have many Ukrainian friends here. We are like brothers and sisters. Many Russians have roots in Ukraine."

This is especially true among religious people like Father Oleg, himself of both Ukrainian and Belarusian descent. "During the period of the Soviet Union, under communism, the pressure against religions was very strong," he recalls, "and few young men from the central regions dared to become priests."

So priests often came from the peripheral regions, especially from western Ukraine, which has always kept the faith alive. That's why even today many Russian clergy are actually of Ukrainian origin. The choir members, residents of Bangkok, are also all Ukrainian.

The conflict in Ukraine has caused great tension within the Orthodox Church. While Patriarch Kirill in Moscow reaffirmed his support for the operation by Vladimir Putin's troops, Patriarch Bartholomew of Constantinople condemned the "horrific invasion" and recognized the independence of the new Ukrainian Church under Metropolitan Epiphanius.

More than 100 Ukrainian churches have now distanced themselves from Moscow. But, unlike their leaders, priests and parishioners in Phuket want to remain united and hope for an end to the war soon.

*This is an adapted version of an article that appeared in Eglises d'Asie (Churches in Asia), a publication of the Paris-based Missions Etrangères de Paris (MEP) or Paris Foreign Missions Society.