Demotion to lowest level is 'unfair' says spokesman, but observers doubt it will change 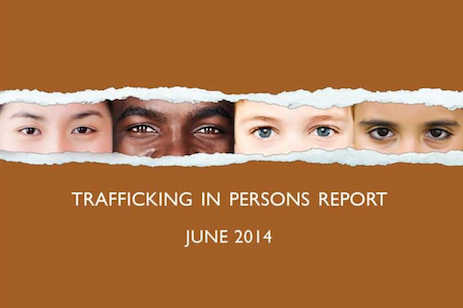 Picture: US Department of State

Thailand's military-led government characterized as unfair a US report that downgraded the country's human trafficking record, while observers said the junta will do little to prevent modern day slavery.

Thailand was downgraded last week to Tier 3, the lowest level in the US State Department's annual Trafficking in Persons report - a designation that could trigger sanctions.

Foreign Ministry permanent secretary Sihasak Phuangketkeow told a press conference in Bangkok on Saturday that Thailand had made strides in tackling human trafficking. He said the junta had made the fight against human trafficking a top priority.

However, a seasoned Thai observer said the statement could be little more than "a fig leaf effort to appease Washington".

"There have long been reports that individuals belonging to Thailand's military, police and paramilitary have over the years profited from human trafficking. With members of the Thai security sector benefiting from human trafficking, civilian governments were hard pressed to clamp down on it," said Paul Chambers, director of research, Institute of Southeast Asian Affairs, affiliated with Chiang Mai University.

"Now that a military junta rules Thailand, I seriously doubt that there will be any genuine or long term enforcement of anti-human trafficking measures," he told ucanews.com.

Chambers said that while Thailand's law enforcement sector has the capacity to tackle human trafficking, the country's efforts fall short.

"Indeed, the Thai government does not even train soldiers destined to join UN peacekeeping forces about human trafficking," he said.

"There is not yet sufficient evidence that the Thai state has sufficient intention to want to effectively seek to counter the problems.

"Human trafficking will never be wiped out. But in Thailand, state officials have long been unable to make words match deeds."

Thailand's downgrade followed several months of revelations of forced labor in the country's seafood industry and reports of government officials selling refugees from Myanmar to human traffickers. It is now ranked on the same level as North Korea, Iran and Saudi Arabia. Also downgraded to the lowest tier in the US report was Thailand's neighbor, Malaysia.

In December, a report by Reuters alleged Thai government officials were profiting from the sale of Rohingya refugees to human traffickers. Instead of prosecuting those alleged to have been involved in the scheme, the Thai government instead pressed charges against reporters covering the story.

"Washington will never be able to stop this pattern. But the downgrading might persuade Thailand to at least try harder to reduce the practice," he added.

Avoiding being labeled as the "worst of the worst" is a major reason Southeast Asian governments try to avoid a Tier 3 designation, Phil Robertson, deputy Asia director for Human Rights Watch (HRW), said in his Twitter feed.

Robertson noted that little has improved since a 2010 HRW report that detailed widespread abuses of migrant workers in Thailand.

Thailand's relegation to Tier 3 on the US list was automatic after spending four years on the Tier 2 watchlist, receiving repeated warnings to improve its human trafficking prevention and prosecution efforts.

"Anti-trafficking law enforcement efforts remained insufficient compared with the size of the problem in Thailand, and corruption at all levels hampered the success of these efforts," the report said.

The report, which was carried out before the military coup, said tens of thousands of the world's trafficking victims end up in Thailand as migrants from neighboring countries "who are forced, coerced, or defrauded into labor or exploited in the sex trade".

Good Shepherd Sister Jantana Jantorn, who manages the Fatima Center, a Bangkok-based agency that provides housing, education and emergency services to trafficking victims, said it is a struggle to provide services to victims rescued from the system.

"Trafficking is a very big problem; we know this. But the migrant worker is often in a place where no one can see them. We need to find them and help them," she said.