Without a systematic overhaul of the Buddhist clergy, rogue monks will be here to stay 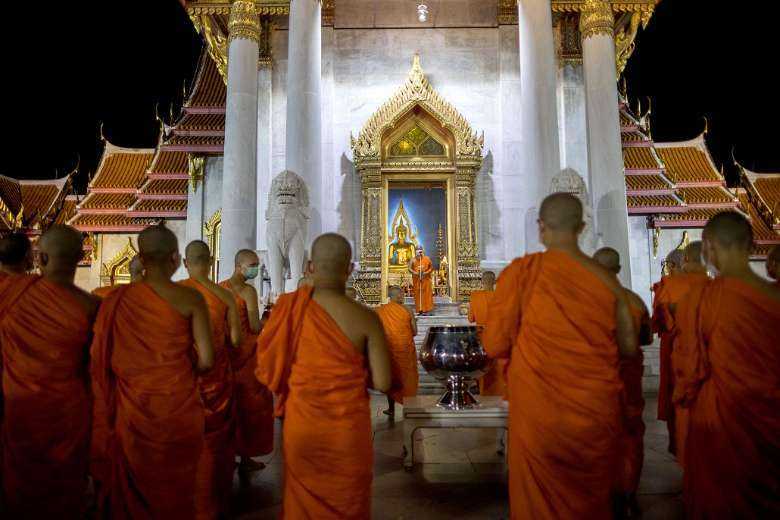 Buddhist monks gather at Wat Benchamabophit Dusitwanaram, also known as the marble temple, in Bangkok on May 15, to celebrate Vesak Day, marking the birth, enlightenment and death of Gautama Buddha. (Photo: AFP)

In Thailand Buddhist monks are expected to be paragons of virtue and so various scandals involving clergymen acting in ways that violate their faith’s tenets come as a shock to believers.

Yet long is the litany of wrongdoings that men of the cloth, including the abbots of some monasteries, have been accused of perpetrating across this Buddhist-majority nation where most locals accord automatic respect, usually bordering on reverence, to saffron-robed monastics.

In recent months alone numerous Buddhist monks have been caught engaging in inappropriate and criminal acts in violation of their monastic vows from fornication to rape, from substance abuse to drink driving, and from theft to embezzlement.

Some monks have gone even further and committed murder despite their faith prohibiting them from harming living creatures.

In one especially unsettling case that shocked Thais, Phra Aum Deeruenrom, the 59-year-old abbot of Wat Ban Nong Bua in Buri Ram province in Thailand’s agricultural northeast, murdered a young, heavily pregnant woman in cold blood in the summer of 2020.

The monk drove his minivan head-on into a pickup, driven by a municipal official and his wife, Lampai, who was eight months pregnant. When she got out of the badly damaged pickup and tried to flee, the monk gave chase with a machete and proceeded to murder her.

Villagers told police that the abbot had been having an affair with Lampai, who had threatened to reveal their relationship unless he sent her money, which may well have prompted the monk to try and silence her.

Last year, meanwhile, a 41-year-old monk called Phra Sitthikorn Yankhrue, who ran a meditation center in the province of Phitsanulok in northern Thailand, shot a 67-year-old man to death during a heated argument.

Allegations of massive corruption involving monks have also been common.

In one case, Wirapol Sukphol, a popular and widely revered monk who solicited donations to construct a giant replica of the venerated Emerald Buddha statue in Bangkok’s Grand Palace, turned out to have been engaged in massive embezzlement for years.

The monk, who was later defrocked and jailed for his crimes, owned a luxury mansion in California and another one in his hometown in northeastern Thailand in addition to 22 Mercedes Benz cars and 200 million baht (US$5.75 million) in 10 bank accounts. In addition, he stood accused of conducting illicit affairs with various women and impregnating a 15-year-old girl in a case of statutory rape.

Such incidents, which get widely publicized in Thailand, have done much to harm the image of the Sangha, the community of monks in Thailand where some 300,000 men are ordained as monks for short or long periods at any one time in a country of 70 million, according to official statistics.

Upon their ordination all men who don saffron robes and officially become bhikkhus, as monks are known, pledge to abide by 227 strict monastic rules, which prohibit them from engaging in sexual relations, consuming intoxicants, stealing and telling falsehoods.

Earlier this month, in an attempt at damage control, Prime Minister Prayut Chan-o-cha ordered the National Office of Buddhism to strengthen supervision at monasteries to ensure that all monks follow the rules.

“The main duty of the monks is to maintain and propagate the teachings of the Buddha as well as studying Buddhist doctrines. Whatever they are doing must not neglect the Buddhist principle of ‘Brahmacharya,’ whose purpose is to enable practitioners to achieve enlightenment,” a spokesperson for Prayut said.

“The Prime Minister ordered the [government agency] to coordinate closely with communities of monks in all areas to monitor the monks’ behaviors and discipline in order to regain people’s trust and make sure Thai Buddhism will prosper once again.”

It remains to be seen, however, if this initiative from the top down will be successful and some prominent commentators are skeptical.

“In a seemingly endless string of sex scandals in the Thai Buddhist clergy, one involves a 23-year-old monk Phra Pongsakorn Papassaro, better known as Luang Pi Kato [Elder Monk Brother Kato].  He commanded a large following outside his temple, Wat Pen Yat in Nakhon Si Thammarat, thanks to his good looks, comical dhamma talks, and social media savviness,” Sanitsuda Ekachai, a social commentator noted last week in an op-ed, apropos of one of the latest scandals.

“Though in the monkhood for only three years, his popularity brought his temple an avalanche of visitors — and donors. So financially crucial was his presence to the temple that the young monk was made an acting abbot.”

So far so good. It turned out, however, that even as he was preaching abstinence and moral conduct by day, the young monk would sneak out at night from his monastery to conduct a liaison with his lover, who ended up exposing him after he failed to give her money.

“Had his sex life not been exposed, he would have soon become the youngest abbot in the country with total legal control over the temple’s donations and assets,” Sanitsuda observes.

The commentator stresses that it is the rigidly hierarchical and autocratic system of Thailand’s Buddhist clergy that is partly to blame for this sorry state of affairs because it emphasizes rote learning and obedience over spirituality and moral conduct.

“Money, power, and sex often come together when [a monk] plunges into the world of worldly desires. Sex scandals and corruption in the clergy will never cease when temple money is up for grabs,” she argues.

“In a fiercely materialistic society that constantly spurs greed and lust, monks without strong spiritual training have little chance of winning,” she explains. “Without a systematic overhaul of the clergy, the system will continue to rot. And rogue monks will be here to stay.”