Up to 300,000 sex workers have been left jobless after a nationwide lockdown to stem the coronavirus

A tourist takes a tuk-tuk ride along a street in Nana, Bangkok's famed red light strip of bars and clubs. (Photo: AFP)

An estimated 200,000 to 300,000 sex workers have been left jobless for months as a result of a nationwide lockdown, which has forced the closure of all bars, nightlife venues and massage parlors since March.

Many Thais who work in the country’s thriving, if largely illegal, sex industry have fallen on hard times economically, experts and social workers say. Yet sex workers are ineligible for the monthly handouts the government has initiated for millions of newly unemployed people so as to cushion the economic blow to their lives.

“Sex workers in Thailand are facing a loss of income and becoming increasingly vulnerable as a result of the restrictive measures put in place to respond to the coronavirus pandemic,” UNAIDS, a relief agency of the United Nations, has warned in a statement.

“Most Thai sex workers are not eligible for the social protection measures included in the government’s stimulus package, while non-Thai sex workers don’t have access to any support.”

“The government is not doing enough to support this group of people and their immediate needs,” concurs Suparnee Pongruengphant, project manager for gender equality and social inclusion at the United Nations Development Program in Bangkok, who spoke at an online media event for foreign journalists last week.

“They are denied support because they are not categorized as laborers and legalized in Thailand, [yet they should be] entitled to the same protections and welfare services as [people in] other professions,” Suparnee stressed.

Hundreds of thousands of locals, particularly women and transwomen, work in Thailand’s sex industry, which helps underpin the country’s key tourism sector that accounted for nearly a fifth of GDP last year.

Yet Thai authorities have long been ambivalent about their country’s image as a notorious global hub of sex tourism. Although prostitution is technically illegal in Thailand, the practice is widespread, especially at popular nightlife and tourist venues such as massage parlors and go-go bars.

Police routinely turn a blind eye to prostitution, and there have long been allegations that senior police and military officers directly benefit from Thailand’s sex industry by receiving cuts from takings at nightlife venues as a form of “protection money.” 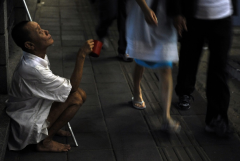 “I don’t think this government will even [acknowledge] the existence of the sex industry,” observes Chalidaporn Songsamphan, president of the Service Workers In Group Foundation, which promotes and protects the health, human rights and dignity of sex workers.

Sex workers who revealed their real occupation when applying for the monthly government handout “didn’t get any support. There is no place for sex workers [in the government’s relief program],” Chalidaporn added.

The rights advocate, who is an associate professor of political science at Thammasat University in Bangkok, emphasized, however, that sex work should be accepted as a legitimate occupation.

Thailand’s sex industry, experts and insiders say, employs hundreds of thousands of people, many of whom would be hard-pressed to find better-paying jobs elsewhere because they lack employable skills and adequate education.

“Most of the women who come to work for us hail from poor rice-farming villages. They come to Bangkok in the hope of a better life but realize that only low-paid jobs are open to them,” a business owner who runs several nightlife venues at a popular tourist hub in Bangkok told UCA News on condition of anonymity.

“Sex work is widely seen as degrading, but many people who work in the industry don’t see it that way. They see it as just another way of earning a living.”

Yet most sex workers aren’t earning any living at all at the moment.

Although the government-decreed lockdown of nightlife venues, massage parlors and bars is slated to be lifted next month, an absence of foreign tourists means that a return to a pre-pandemic level of normalcy in the industry will likely take months, if not years.

With all local establishments shuttered, normally lively nightlife hubs have stood deserted for more than two months, while sex tourism hubs such as the seaside resort town of Pattaya have seen all foreign tourism disappear overnight owing to a closing of international borders.

“I haven’t had a customer for a long time,” laments Pim, 29, who supplements her income as a hairdresser by moonlighting as a freelance sex worker in a famed red light district of Bangkok.

A single mother who has left her young daughter in the care of her parents in a farming village in the northeastern boondocks of Thailand, the young woman has not made any money for months. She normally sends a large part of her monthly income to her parents to help them make ends meet as they look after her child. She hasn’t had any money to spare for sending home since earlier this year.

Hair salons were allowed to reopen last week but business at her establishment has yet to pick up for want of customers, she says.

She hasn’t had any more luck in her other line of work, either. Her regular customers, most of whom were foreign men from Europe, the Middle East and India, have been AWOL since March as they returned to their home countries as a result of the pandemic.

“This situation is very bad for me,” Pim laments. “I don’t know how much longer I can survive like this.”