A 22-year-old woman has become the latest victim of Thai authorities’ strategy to charge political dissidents with royal defamation and other crimes that could land the accused in prison for decades.

The young woman, who has been identified only by her first name Phonphimon, was arrested last week after she was reported to police for a Facebook post in which she allegedly expressed views critical of the country’s king.

Phonphimon is being detained by police in her hometown of Chiang Mai in northern Thailand, according to Thai Lawyers for Human Rights.

In Thailand, criticism of the monarchy, known as lèse majesté, is a crime punishable by up to 15 years in prison for each count.

Phonphimon has denied the charge, yet she remains detained in a small, badly lit cell with no window where she is suffering from intense stress, according to her lawyer.

“This law is not fair. It’s like people who are accused are being bullied, like their lives [are] taken away, like they’re dead,” the young woman said, according to her lawyer. 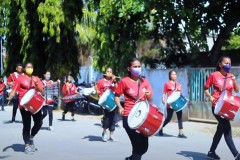