Royal noble consort Sineenat Bilaskalayani greets royalist supporters outside the Grand Palace in Bangkok on Nov. 1, 2020. Criticism of the monarchy is punishable by long jail sentences in Thailand. (Photo: AFP)

Thai Prime Minister Prayut Chan-o-cha has instructed several government agencies to expedite their investigation of suspected cases of royal defamation made by citizens in public or online and bring charges against the alleged culprits.

Prayut’s call comes after numerous members of a youth-led pro-democracy movement have already been charged with allegedly insulting the monarchy, which could land them in prison for decades if convicted.

In a directive issued by Prayut this week, four government agencies, including the Department of Special Investigation, the Technology Crime Suppression Division and the Ministry of Foreign Affairs, were instructed to step up their campaigns to stamp out all criticisms of Thailand’s royal family.

Lese majeste, or royal defamation, is a serious crime in Thailand where royals have long been portrayed officially as inviolate, supremely gifted and impeccably virtuous. Any criticism of them is punishable with up to 15 years in prison per count.

However, members of the royal family, particularly King Maha Vajiralongkorn, have been openly criticized by numerous leaders of a grassroots student movement that staged a series of mass rallies last year to call for sweeping political reforms, including newly imposed constitutional limits on the powers of the monarchy.

At the same time, thousands of Thais took to social media to openly mock and criticize King Vajiralongkorn for his lifestyle choices and alleged political alliance with the government of Prayut, a former army chief who seized power in a coup in May 2014.

In response, Thailand’s government has brought numerous charges of lese majeste, on top of other charges such as sedition, against at least 42 pro-democracy activists and student demonstrators, including a 16-year-old minor and a 17-year-old.

Several prominent rights bodies followed suit in condemning Thailand’s military-allied government for charging numerous pro-democracy activists, most of whom are in their twenties and early thirties, with various crimes for simply protesting and demanding political reforms.

“An estimated 220 individuals, including children, are facing criminal proceedings. At least 149 of them are being charged for alleged violations of the restrictions on public assembly under the Emergency Decree and 53 are facing charges of sedition,” Amnesty International said in a statement in December, adding that many of them were also facing lese majeste charges. 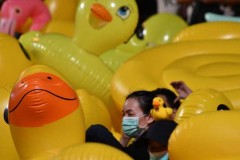 Since the statement was issued, several more pro-democracy activists have been charged.

Amnesty International has called on Thai authorities “to drop all charges against all peaceful protesters and those expressing support for them.”

Some political observers have stressed that the widespread use of the lese majeste law by authorities could further harm the image of the monarchy among many young Thais.

“Resorting to the law to shut down critical discussion of the [royal] institution is a sign of desperation,” James Buchanan, a visiting lecturer in politics at Bangkok’s Mahidol University International College, wrote in an op-ed published on Jan. 13.

“[It is] a misjudgment that will backfire,” Buchanan argued.