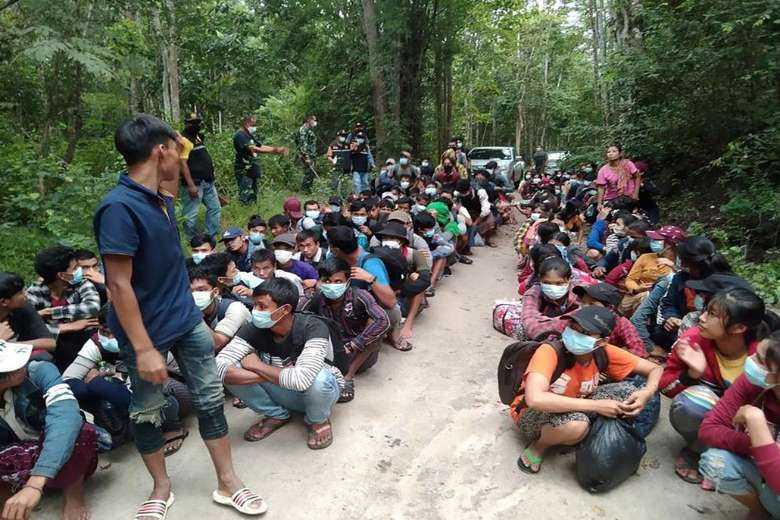 Thai authorities are stepping up their campaign against human traffickers who continue smuggling large numbers of migrants from neighboring countries.

Thy are issuing arrest warrants for people smugglers whose assets will be seized if they are convicted of human trafficking, money laundering and other crimes, according to Labor Minister Suchart Chomklin.

In addition, the Ministry of Labor is seeking to make it easier for migrant workers to enter Thailand legally in order to discourage migrants from relying on people smugglers for entry.

“Migrant workers should not have to wait longer than three weeks before they can enter the country legally under new memorandums of understanding [between Thailand and its neighbors],” Suchart said at a press conference this week.

Under these pacts with Myanmar, Laos and Cambodia, up to 80,000 migrant workers from these nations will be allowed to work in Thailand in the first phase, especially in sectors such as construction and food processing that are experiencing severe labor shortages.

At the same time, however, large numbers of migrants continue streaming illegally into Thailand through porous national borders despite stepped-up border patrol measures.

Migrant workers, who often face discrimination once in Thailand, end up having to pay high recruitment fees just to get a job

Last week alone, nearly 3,000 illegal crossings were detected, though many more are likely to have managed to stay undetected.

Border patrol units of police officers and soldiers in the western Thai province of Kanchanaburi, which borders Myanmar, arrested 218 migrants from Myanmar on just one day, Nov. 9, as the migrants were waiting in a palm plantation to be picked up by agents of their prospective employers.

The migrants told police that had each paid either 25,000 baht (US$760) or 26,000 baht to job brokers before entering Thailand with the help of smugglers.

Most migrants from Myanmar are smuggled into Thailand by human trafficking networks, which usually require payment up front from financially disadvantaged migrants who then become indebted to brokers who set them up for jobs in exchange for a percentage of their earnings.

In the process, migrant workers, who often face discrimination once in Thailand, end up having to pay high recruitment fees just to get a job, according to labor rights advocates such as Finnwatch, a Finnish civic organization advocating for responsible corporate practices worldwide.

“This means migrants seeking legal employment might find themselves deeply indebted before [their] work begins — buried in debt that often takes years to repay,” explains Darian McBain, director of corporate affairs and sustainability at Thai Union.

Complicating the matters of law enforcement in the Thai government’s crackdown on human traffickers is that some senior police and military officers as well as government officials are suspected by experts and labor right advocates of being behind certain smuggling networks or receiving financial benefits from their operations.

Thai authorities have been faulted by the United States State Department in its latest report, published in July, for failing to do enough to stop the trafficking of migrant workers into key labor-intensive industries. The shortcomings of Thai law enforcement prompted US authorities to downgrade the status of Thailand to a Tier 2 Watch List nation.

Despite the scale of Thailand’s human trafficking problem, there were significantly fewer trafficking investigations in 2020 than the year before when there were only 194 trafficking-related convictions, down 17 percent from 2018, according to the State Department.