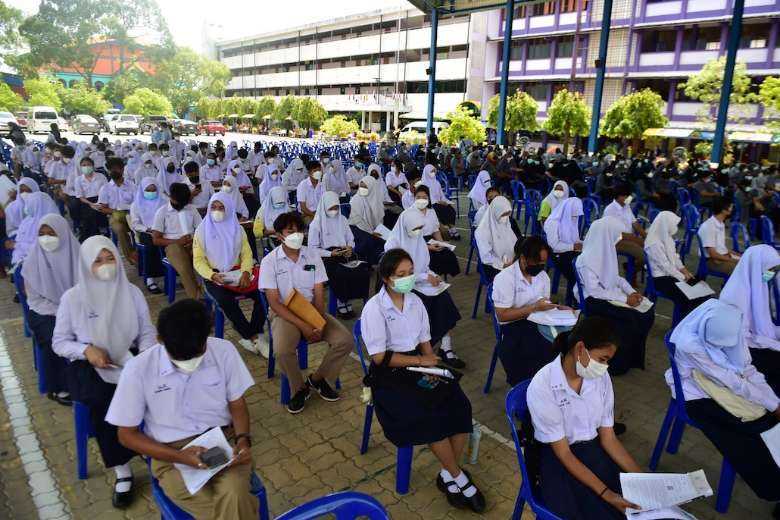 Students wait to receive doses of a Covid-19 vaccine at Narasikalai School in the southern Thai province of Narathiwat on Oct. 15, 2021. (Photo: Madaree Tohlala/AFP)

Some 1.2 million children have dropped out of school in Thailand as a result of poverty, family issues and other factors that make it hard or impossible for them to study, the Education Council said.

In all, 16 percent of school-aged children are not studying in any formal settings, with the rate especially high in economically and socially disadvantaged communities, according to experts.

Throughout last year and 2020 during the Covid-19 pandemic, which battered the Thai economy and kept schools closed for prolonged periods, many students dropped out permanently as many were required to start working to support their families, experts said.

“The situation of students dropping out of schools is still severe,” Attapol Sangkwasi, secretary general of the Education Council, warned this week.

In addition, low-quality teaching in many schools, especially in rural areas, prompted many youngsters to turn their backs on receiving a formal education.

“[A] UNICEF report states that the abilities of students to read and write have dropped by 30 percent,” Attapol said.

Teachers are told to pass students even though they have failed, and a blind eye is turned to serious problems like plagiarizing

By law, Thailand mandates nine years of basic education free of charge for all children in the country in what is seen by education experts as a progressive policy.

However, educational attainment in Thailand has been notoriously low by regional and international standards in key subjects such as literacy, mathematics and English as a foreign language.

Several factors have been highlighted as the reasons behind the poor quality of tuition in government-run schools, which have caused generally low levels of educational attainment among students.

“Plagued by inadequate funding, huge class sizes (more than 55 students to a class is normal), terrible teacher training, students that seem to have little motivation and a system that forces teachers to pass students even though they have actually failed — there doesn’t seem to be much hope education in Thailand will improve any time soon,” a teacher who taught at Thai schools for a decade noted in an essay published online.

“Rules change every semester, new guidelines are handed down to teachers regarding course content, lesson plans, testing etc. at the beginning of each new semester, then change again the following one. Teachers are told to pass students even though they have failed, and a blind eye is turned to serious problems like plagiarizing.”

Despite such conditions, however, many students from disadvantaged background do want to acquire an education but are unable to do so for economic and other reasons.

Many youngsters, particularly in remote rural areas and ethnic minority communities, need to start working early on to help their families, which leads them to drop out of school without acquiring basic skills such as literacy.

As a result, these youngsters often end up becoming permanently marginalized and at risk of being exploited by unscrupulous employers who may require them to work long hours in grueling conditions for little pay, especially in such notoriously exploitative sectors as fishing and food processing.

“The prevalence of forced labor in the Thai fishing industry reflects a longstanding lack of respect for basic rights in the sector,” Human Rights Watch has noted.

In addition, many youngsters with little or no formal education are at risk of becoming sex workers in an industry where they may be subject to maltreatment and degrading conditions.