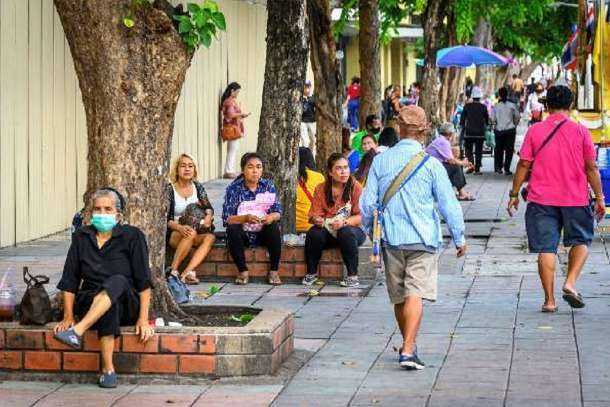 Pedestrians walk along a street in Thai capital Bangkok. Rising economic hardships for millions during the Covid-19 pandemic may have caused a marked increase in Thailand's already high rate of domestic abuse. (Photo: AFP)

Mounting economic hardships for millions of Thais during the Covid-19 pandemic is thought to have caused a marked increase in the already high rate of domestic abuse and violence against women, the Thai Health Promotion Foundation says.

Reported cases of domestic violence have increased by 66 percent nationwide since March when the pandemic began to make itself felt in the country, according to a survey by the foundation.

In Bangkok the rate of domestic violence has grown by a quarter this year over the same period last year, while in southern Thailand it has surged by nearly a half in recent months.

The foundation attributes these increases to higher rates of alcoholism and substance abuse driven by lower household incomes as the economy has taken a hit during the global pandemic.

The finding is especially disconcerting as even before the pandemic Thailand was already listed by the United Nations as one of 38 countries in the world with the highest rates of domestic violence against women.

On average there have been four reported cases of domestic violence against women in Thailand every day for years, according to available statistics.

“The home, which should be a safe place for women and children, can be a terrifying place where they are subjected to beatings and verbal abuse,” Kannikar Charoenluck, director of the Ministry of Social Development and Human Security’s gender equality promotion division, was quoted as saying.

Many cases of domestic violence result in Thai women being murdered by their partners, yet local authorities have been largely turning a blind eye to the phenomenon, according to Jadej Chaowilai, director of the Women and Men Progressive Movement Foundation, who said the level of brutality involved in many cases was “shocking.”

“The current situation is like a war in which killings easily erupt. Death is the result, but the government is too passive to act,” Jadej said.

In just the first seven months of this year, there were 367 reported cases of domestic violence, with 242 of them resulting in the death of the victim.

“This means that 65.9 percent of [reported] domestic violence cases in this period involved murders,” Angkhana Intasa, a member of the foundation, said at a press conference in August, adding that in 2018 the percentage was lower at 48.5 percent.

“Alcohol consumption and drug abuse are key factors in the murder of family members,” she said.

Men are often driven to murderous rage by jealousy and concerns over money.

This attitude helps perpetuate a social climate in which abusers feel at liberty to take their anger out on their partners physically, according to social workers at the foundation.

“Up to 94.9 per cent of people witnessing domestic violence decided not to intervene,” Angkhana said, citing the results of a survey.

“We should embrace a new way of thinking. Let’s treat such matters as a social issue,” she stressed. “If we see domestic violence, we should step in to provide help or at least alert relevant authorities.”