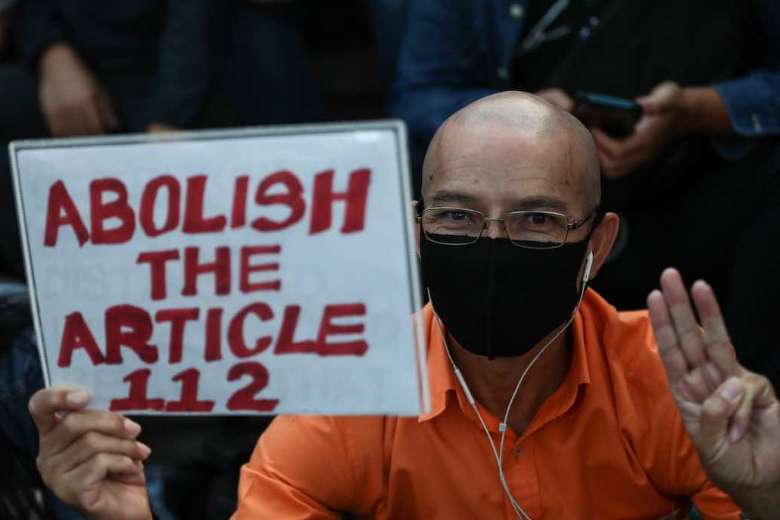 A pro-democracy protester gives the three-finger salute while taking part in a rally to denounce the use of the lese majeste law, under section 112 of the penal code, in Bangkok on December 10, 2020. (Photo: Jack Taylor / AFP)

Thai authorities have renewed the use of a draconian lese majeste law to stamp out criticisms of the country’s venerated monarchy, with at least 23 people charged in recent days for allegedly defaming the institution.

The move is seen as part of an escalating clampdown by the government of Prime Minister Prayut Chan-o-cha, a former army chief, in its bid to stifle the democratic aspirations of young protesters who have been staging anti-government mass rallies around Bangkok and elsewhere for months.Among those charged are numerous leaders of the student-led pro-democracy movement, called Free Youth, who have been calling for Prayut to resign almost seven years after he seized power in a military coup in May 2014 by ousting an elected government.
Donate to UCA News with a small contribution of your choice
The protest leaders, some of whom are still in school, are standing accused of having violated a law, Section 112 in the Criminal Code, which prohibits defamation of the king, queen, heir-apparent, or regent.They are accused of defaming the Thai monarchy, which is widely regarded as one of the richest monarchies in the world, by demanding constitutional limits on its political and financial influence.If convicted, the young democracy activists could be sentenced to decades in prison as the law prescribes up to 15 years in prison per charge, and some of the accused are facing up to seven separate charges.In response to the charges, student activists have called the use of the law against them a violation of their basic freedoms.“Using Article 112 makes freedom of expression non-existent,” said Jatupat Boonpattararaksa, who was first imprisoned on a lese majeste charge in 2016 and is now facing another charge. “There is no justice.”Somyot Prueksakasemsuk, one of the nine political activists charged on Dec. 8 alone, has pleaded innocence and pledged to fight the charges.“I did nothing wrong. I spoke the truth and will fight to the dead. I won’t run away,” Somyot told reporters before reporting to a police station to hear the charges against him.
Related News Comforting HIV/AIDS people with a bowl of soup

Thank you. You are now signed up to Daily newsletter
After the coup of 2014, several critics of Prayut’s military-allied regime were charged with lese majeste, including university lecturers and rights activists.Some of them fled Thailand to self-imposed exile abroad, saying they were certain of an unfair trial as lese majeste cases are held in secret by Thai courts without proper oversight.In recent years the authorities stopped using the lese majeste law. In their bid to silence critics, they resorted to a draconian Computer Crimes Act, which severely limits free expression online, or charged dissenters with sedition.However, faced with mounting and openly expressed criticisms of the Thai monarchy, long seen as a taboo, by pro-democracy activists, Prayut has recently announced that his administration would start using the lese majeste law again.The decision will further limit free expression in a country where freedom of speech is already severely limited, prominent rights activists warn.“By bringing back the lese majeste charges, the Thai state [is signaling that it] is not willing to make any compromise with pro-democracy protesters,” said Sunai Phasauk, a senior researcher at Human Rights Watch.“Many venues for discussion have been shut down,” he added. “What the government should do is to listen to dissenting voices.”