Lao fishermen lay their nets on the Mekong River near Luang Prabang close to the site of an approved dam site. (Photo: AFP)

Thailand’s government has shrugged off concerns voiced by environmentalist groups and agreed to import electricity from several controversial hydroelectric projects on the Mekong River in neighboring Laos.

The Thai National Energy Policy Committee decided this month to buy power generated by three Chinese-funded hydroelectric dams under construction in Laos that environmentalists say will inflict grave damage on the river’s already fragile ecosystem while also harming people living along the waterway.

Dams constructed on the Mekong and its tributaries to support Laos’ burgeoning hydropower industry “are bringing great change to ecological, agricultural and cultural systems in this region,” Prof. Kenneth Olson, an American environmental scientist, has warned.

These dams “could cause irreversible and long-term ecological damage to a river that feeds millions of people,” said Olson, an expert on the river’s ecosystem.

Despite such warnings, however, Thailand’s government appears to have placed economic considerations ahead of ecological ones in deciding to purchase electricity from the three Chinese-backed dams.

The Thai government’s decision has been hailed by a senior Lao official as “a step forward for Laos.”

These dams have already caused havoc with the traditional flow of the river, frequently leading to acute water shortages and sudden flash floods downriver

“Laos is going to build all planned dams, including these two dams on the Mekong River,” the unnamed official was quoted as saying. “Right now, our ministers are meeting and discussing our plans to sell all our power to Thailand.”

The impoverished nation, whose communist government wants to turn the mountainous country into the “battery of Southeast Asia,” is planning as many as seven new hydroelectric dams on the Mekong, mostly with Chinese backing.

Further upriver, China has already completed five large dams on the river, which originates in the Himalayas and passes through five other countries before it empties into the South China Sea.

These dams have already caused havoc with the traditional flow of the river, frequently leading to acute water shortages and sudden flash floods downriver. 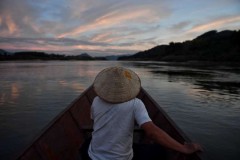 Environmentalists have warned that the helter-skelter dam-building projects underway in Laos’ portion of the river will forever alter the ecology of one of the world’s most environmentally important rivers.

At the same time, tens of millions of people living alongside the river in several countries from Thailand to Vietnam could end up seeing their traditional livelihoods disappear with water levels and fish stocks adversely affected by the dams.

The population of the iconic giant Mekong catfish, for instance, has decreased by around 90 percent in the last decade, with some experts speculating that there may now be only a few hundred specimens remaining in the entire river, according to the World Wide Fund for Nature.

Environmentalists say that despite the catastrophic impacts of more dams on the river, the Lao government is bent on pressing ahead with its construction projects.

“It’s impossible to stop the Lao government from building dams, but the government should better manage and control their impact and pay fair compensation.”

The expert added that the new dams “don’t benefit the locals very much.”