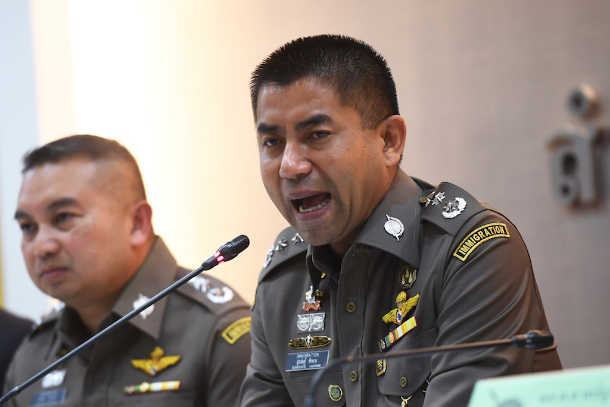 Thai immigration chief Surachate Hakparn (right) speaks at a press conference in Bangkok on Jan. 9 after Saudi Arabian teenager Rahaf Mohammed al-Qunun was deemed by the United Nations to be a legitimate refugee after running away from her family and being stopped by authorities at Thailand's main airport. (Photo by Lillian Suwanrumpha/AFP)

Thai immigration authorities may soften their stance on asylum seekers, according to the head of Thailand's Immigration Bureau.

At any one time some 900 visa overstayers, including women and children, languish in squalor at the facility in prison-like conditions, often for months or years on end.

"The IDC is the face of Thai immigration police," Surachate said. "I want to make sure that [detainees there] are treated well. People should have good food, they should have a chance to exercise and they should get some sunlight."

Surachate, 48, who is the son of a well-connected former policeman and widely seen as a rising star in Thailand's paternalistic police force where nepotism is rife, also promised greater transparency into the workings of detention facilities around the country.

"We now have a policy not to detain mothers with their children," he said. "Many people have been asking me about immigration detention centers. We'll open them up [for visits] and we'll be transparent about conditions there."

In recent months Surachate, a media-savvy policeman known to Thais by the nickname Big Joke, has been seeking to establish a rapport with journalists. He has instructed Immigration Bureau officials to be more forthcoming with members of the public and the media.

"These days our work must be transparent as we are under constant scrutiny," he said.

Thai immigration authorities have long been criticized for their handling of asylum seekers, who are often treated no better than common criminals.

Several thousand asylum seekers have been staying illegally in Thailand for years. As the country rarely grants refugee status to asylum seekers, most have been languishing in legal limbo while awaiting a chance to be relocated to third countries as refugees.

They include some 2,000 Pakistani Christians who would face the threat of being victimized or killed if deported back to Pakistan. Subsisting on handouts from local charities, Pakistani Christians spend almost all their time in small low-rent apartment units around Bangkok for fear of being arrested as visa overstayers if they venture outdoors.

"We are not criminals. We are refugees," a Pakistani Catholic from Lahore told ucanews.com on condition of anonymity. "In Thailand officials don't understand this and the UNHCR hasn't helped us much. All we want is a place where we can live freely."

Shortly after Surachate was appointed to lead the Immigration Bureau in September, he launched a weeks-long crackdown on illegal immigrants and visa overstayers.

Some 200 Pakistani Christians were also rounded up and detained. Thai authorities said they would deport them back to Pakistan, but they have yet to follow up on this threat.

"We are working with the UNHCR to find out how long it will take for those with valid refugee claims to be accepted to a third country," Surachate said.

The policeman stressed that asylum seekers who would face threats to their wellbeing or life in their home countries will not be deported. "People will not be sent back [home] to face danger," he said.

In early January Thailand's Immigration Bureau decided not to deport a Saudi Arabian teenager, Rahaf Mohammed al-Qunun, who arrived in Bangkok on a flight from Kuwait.

The 18-year-old woman said she would be murdered by her family if she was returned home because of her renunciation of Islam. In the ultraconservative Muslim nation, apostasy carries the death penalty. "If deporting her would result in her death, we definitely wouldn't want to do that," Surachate stressed at the time.

Within days al-Qunun was granted asylum in Canada where she has started a new life.

"This is a clear example of successful international cooperation," Surachate said yesterday.

Each week, meanwhile, between 2,000 and 3,000 illegal migrants and visa overstayers are deported from Thailand back to their home countries. Most are economic migrants from neighboring nations.

Surachate said stepped-up immigration crackdowns are necessary to root out foreign criminals. "The goal is to make it harder for foreign criminals to stay here," he said. "We have to stop criminals from coming here as tourists to commit crimes like romance scams and cybercrime."

"Since last October, we have stepped up our policy to roll back illegal activities committed by foreigners," he said. "You are welcome to come here to work, retire or travel. But don't come here to commit crimes."

Refugee advocates point out that concepts of "criminality" can be nebulous. Genuine asylum seekers often end up being seen as criminals in Thailand simply because they have overstayed their visas.

"If you have a valid passport and a valid visa, you may have nothing to fear," said a rights advocate who works for a Bangkok-based refugee organization and asked not to be named. "The trouble is that most asylum seekers have neither."