Thailand poised to expand scope of marijuana use 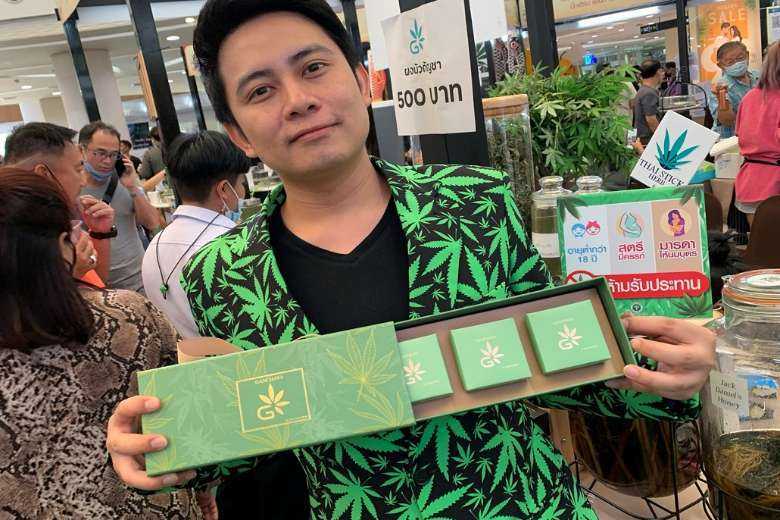 A vendor sells tea containing cannabis leaves at the ‘Ganja and Thai Traditional Medicine in the City’ trade fair at a shopping mall in Bangkok on March 21. The medical and commercial marijuana industry has grown in Thailand since the government's 2018 move to legalize medicinal use. (Photo: AFP)

Thai authorities are planning to expand the scope of marijuana use in a country plagued by the widespread availability of cheap narcotics.

Health Minister Anutin Charnvirakul told reporters that he is pushing for a new law that will enable licensed growers of cannabis to use entire plants for medicinal and commercial purposes as opposed to the current law, amended last year, whereby they are only allowed to use leaves, stems, stalks and roots.

The partial ban on the use of other parts of cannabis plants was enacted during Thailand’s ongoing legalization process of marijuana because flowers, buds and seeds can be especially high in tetrahydrocannabinol, or THC, a potent psychoactive ingredient.

Anutin said the use of the entire cannabis plans will be legalized likely next year as he also urged licensed growers to continue producing more plants for additional income.

“What we have achieved so far is to declare that cannabis stems, roots, leaves and sprigs are not drugs. Starting next year, we’ll remove everything — stems, roots, sprigs, leaves, buds, flowers and seeds — from the narcotics list,” the health minister said late last week.

Those with government-issued licenses can already grow as much cannabis as they wish but cannot use entire plants for commercial purposes, according to a recently passed law that made the growing and use of marijuana legal in a first for a nation in Southeast Asia.

In addition, each household is allowed to grow six pots of cannabis for personal use and for limited sale so as to supplement their income.

The idea behind the initiative has been that farming families may join forces to grow marijuana and sell their produce to government-run hospitals or use the crop themselves to make food and cosmetic products as part of an income-generating project.

“Marijuana and hemp are both economic crops and it provides a new option for locals to generate revenue,” Anutin told growers in northeastern Thailand earlier this year. “We are trying to ease restrictions to allow the public easier access to the plant, but please cooperate and use it correctly.”

At present, the use of marijuana remains banned for recreational purposes in Thailand, but people with certain medical conditions can use the narcotic for medicinal purposes at hospitals, wellness centers and other facilities.

Advocates of the legalization of marijuana around the region have lauded the Thai government’s initiative, saying it could pave the way for similar loosening of restrictions elsewhere.

Even as the Health Ministry is pushing for the further legalization of marijuana, Thailand has been battling an upsurge in the availability of cheap methamphetamines such as ya ba, or “crazy medicine,” as well as heroin.

Most of the illegally produced and trafficked narcotics are believed to flood into Thailand from strife-torn Shan state in Myanmar through porous borders.

“Neighbors and the wider region are getting absolutely flooded with methamphetamines, and there is little doubt it is connected to the governance situation in Shan,” said Jeremy Douglas, regional representative in Southeast Asia of the United Nations Office on Drugs and Crime.