Scores of political dissidents, environmental activists and rights advocates have disappeared in Thailand 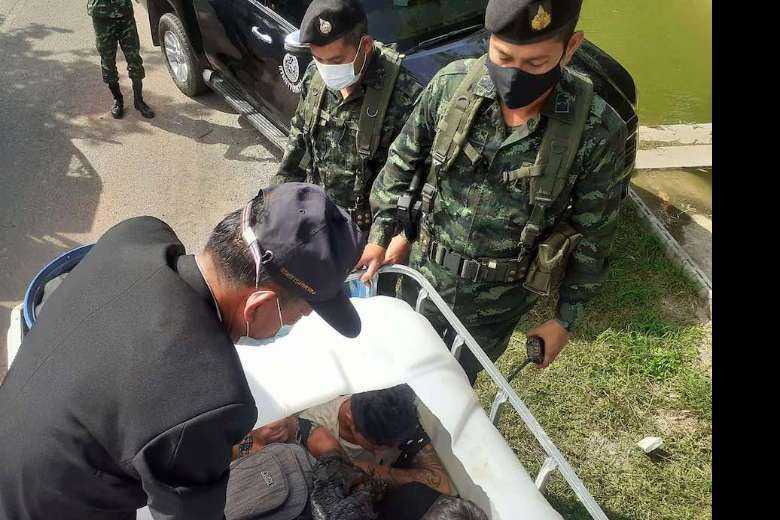 In this handout photo from the Royal Thai Army taken on June 6, 2021 and released on June 7, a local official and military personnel look at Myanmar migrants found hiding in a water tank being transported via a vehicle in Sai Yok district, Kanchanaburi province, bordering Myanmar. (Photo: AFP / ROYAL THAI ARMY)

Parliament members in Thailand have begun debating a draft bill that aims to outlaw torture and enforced disappearances in a country, where rights activists accuse authorities of engaging in both.

The proposed law, called Act on the Prevention and Suppression of Torture and Enforced Disappearance, seeks to hold state officials culpable for abducting and torturing suspects as well as for making them disappear via extrajudicial means. The bill was first tabled in 2016, two years after a military junta seized power in a coup, but it was not signed into law.

“The torturing and disappearing of people by state officials is a gross violation of human rights and cannot be conducted under any circumstances,” Somsak Thepsutin, the minister of justice, said during an address in parliament on Sept. 15. Scores of political dissidents, environmental activists and rights advocates have disappeared over the past decades in Thailand, several of them in the past few years alone. At least nine Thai political dissidents who fled after the military coup in 2014 to neighboring countries have been abducted and probably killed in recent years, according to Human Rights Watch and Amnesty International. In one high-profile case Wanchalearm Satsaksit, a Thai political dissident living in exile in Phnom Penh, was abducted by several men outside his apartment building in the Cambodian capital in June last year and has not been seen since. Thai rights activists have alleged that Wanchalearm was made to disappear on the orders of influential figures in Thailand. Allegations of torture by Thai security officials have also been rife, especially in the country’s three southernmost Muslim-majority provinces where a separatist insurgency has been ongoing for nearly two decades. However, suspected cases of torture have remained investigated, rights groups say. “There is no credible and effective mechanism to help investigate complaints from ethnic Malay Muslims concerning abusive, corrupt or inept officials, problems that have generated discord among the population,” Human Rights Watch has said. One reason for a lack of criminal persecution of officials implicated in allegations of torture is that their actions are not seen as criminal by their superiors, according to Pornpen Khongkachonkiet, director of the Cross Cultural Foundation, a nonprofit that monitors and documents allegations of torture.

“Torture has happened in many parts of the country but has never been recorded as legal cases because the act of state officials were not considered criminal,” Pornpen said.

Rights advocates hope that the draft bill being considered by Parliament will be signed into law soon so as to help plug a yawning legal loophole and facilitate the prosecution of security forces and officials accused of engaging in enforced disappearances and torture.

“To prevent torture and other cruel, inhuman or degrading treatments, Thailand must promptly amend the draft Act on the Prevention and Suppression of Torture and Enforced Disappearance to ensure it reflects Thailand’s international human rights obligations,” Amnesty International said.

“[Thai lawmakers] must enact it urgently,” the rights group added.